The Rams got a huge game from White Thunder and Black Lightning against the Seahawks on Monday night.

Despite the final score, a pile of penalty flags and an inexplicable decision on the game's last play, there was plenty to like about this game. But the one thing that stood out more than anything, for me anyway, was the resurgence of White Thunder and Black Lightning ... Chris Long and Robert Quinn.

Thunderstorm on your back! 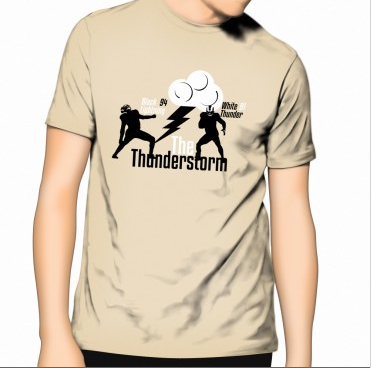 Wouldn't you look great in a Black Lightning and White Thunder t-shirt? Of course you would. And now you can own one!

I was going to run something today about those two. So, because the folks marketing Call of Duty deposited a truckload of money at HQ, we're going to call them the Teammates of the Week. Two birds, one stone.

Quinn's had a few big games this season. He had a three-sack outing in the season opener against Arizona. According to Pro Football Focus, his highest single-game grade came in Week 2 against the Falcons, when he recorded one sack and 11 total pressures. But this was the first time this season that both and Chris Long blew up for big numbers.

The Rams sacked Russell Wilson seven times when it was all said and done. It added up, keeping Seattle's offense contained and giving the Rams a chance to win it whenever they had the ball in hand.

My favorite sequence came at the end of the first half, the last two offensive plays of the second quarter. With the ball on the Rams' 47-yard line, Quinn sacked Wilson for a loss of five. On third-and-16, Quinn did it again, sacking Wilson for a loss of six yards. That put Seattle on their own 42. Had Wilson escaped on either of those plays, his team would have ha a good shot at getting into field goal range and taking a 10-3 lead into the half. Instead, Quinn's play kept it 7-3 and a made it a ballgame for the last two quarters.

Long had a key sack in the fourth quarter. Seattle had the ball on the Rams' 45-yard line, third-and-seven. Long brought him down, killed the drive and gave the Rams offense another shot to win it.

With Sam Bradford out, this is the blueprint for the next eight games, getting the defense to give Kellen Clemens and the offense, especially the running game, enough of a margin to work with, keeping things close for four quarters.

Oh, and what's the point of making two defensive ends the Teammates of the Week if you don't include the sack dances?

And No. 3 ... bonus point if you can tell us what he's referencing here.