Tavon Austin struggling because of the quarterback?

One NFL exec thinks the Rams' rookie receiver is struggling because of another player on the field. Whoever this anonymous personnel man is, he's overlooking the most obvious answer.

Share All sharing options for: Tavon Austin struggling because of the quarterback?

Tavon Austin disappeared last week. The wide receiver that the St. Louis Rams traded up to the eighth spot in the draft to get played a grand total of three offensive snaps in a win over the Houston Texans. So what happened? According to one anonymous NFL exec, it's all about the quarterback.

Tom Pelissero at USA Today touched on the subject Friday, quoting an unnamed suit from another team:

Now before you stop here and head for the comments, let's give this the proper fisking.

On the quarterback thing, Percy Harvin did just fine with Christian Ponder at QB last year. Again, CHRISTIAN PONDER. I know Harvin and Austin aren't exactly the same player, but it's not so easy to write it off as bad QB play.

What happened to Tavon? 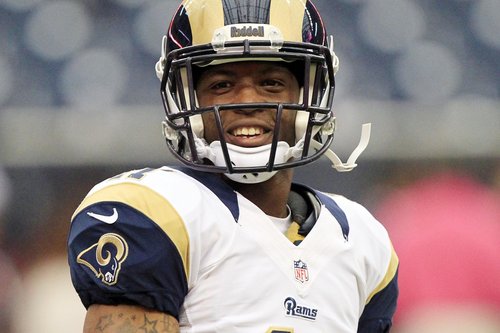 If you blinked this week, you may have missed Tavon Austin's three offensive snaps. Why are the Rams writing their first-round pick out of the script?

Second, consider the source. There are 32 teams, and probably three times that many "personnel execs," by the time you figure in GMs, VPs, head scouts, etc. They all have a different take on players and how they fit into the game. The statement here is entirely SUBJECTIVE.

And because this is the NFL, the simplest explanation isn't being considered here: Austin's struggling. He leads the Rams team with five droppped passes, according to Pro Football Focus. Others have him with six dropped passes. He dropped two in Week 5 against the Jaguars, one week before his playing time was cut back. I don't like to read too much into things, but if you're looking for Occam's Razor, that might be at least one edge of it.

It's no secret that it takes time for wide receivers to adjust to the NFL. Austin's not exactly seeing the wide open spaces offered by friendly Big 12 defenses.

There are also the issues with the scheme. The Rams have leaned heavily on the run over the last two weeks. Bradford only three the ball 16 times against Houston. The three- and four-receiver sets have been replaced with I-formations and four tight ends. It's an approach that happens to be working fairly well too. Austin's behind Chris Givens and Austin Pettis on the depth chart. There just haven't been many snaps for him to take given the current state of play calling.

Speaking of scheme, one reason the Rams have switched to a more balanced, even run-heavy attack, is that Brian Schottenheimer's attempt to run the spread didn't work. Constant pressure and predictability made it easy for defenses to keep in check. Plus, the OC had an aversion to using the team's first-round pick for any play other than high percentage dumpoffs in the flat. (Oh, the irony that Schottenheimer could keep his job because the Rams rejected his terrible approach).

On Thursday, Schottenheimer was asked about Tavon's role in the offense.

"I think ‘Tav's' still a big part of what we're trying to do," he said. "I think it's just when you get up in a game like we did, which we certainly enjoy more than being down by 21 like we were in the first couple games and stuff, you're going to get in some of your big personnel stuff and that just limits the amount of snaps.

"But, no, he's had a great week of practice and everybody's going to have their time, you just never know when it's going to be and just stay ready on the practice field."

That's a pretty non-committal way of saying that the Rams can't tell us when Austin will get more involved in the offense, because they don't know themselves. And that's perfectly legitimate when you're dealing with rookie receivers, especially guys who don't fit the traditional role.

Long-time readers know that I'm not exactly bullish on Bradford's long-term prospects as an NFL quarterback. However, that's got nothing to do with why Tavon Austin is struggling to have an impact six games into his NFL career.