The Rams haven't had much luck when it comes to developing offensive lineman. It's becoming evident, however, that they may have finally succeeded.

Trouble with the offensive line has been a common problem for the Rams. For the past few years, they've brought in player after player trying to open up holes and keep the quarterback upright. With the exception of Rodger Saffold-whose career appears to be a perennial rehab project- not one of Rams starters was drafted by the team.

It's become a honored tradition to speculate on which big name the Rams will bring in during the offseason. This outsourcing of the offensive line isn't anything new - Harvey Dahl is a remnant of Billy Devaney's tenure, after all. For Jeff Fisher's Rams, Scott Wells joined two years ago and Jake Long not far behind him. One fact that is swept under the rug by this constant splurge? The Rams are seemingly incapable of developing offensive lineman.

This is changing with the emergence of Joe Barksdale.

John Breitenbach from Pro Football Focus highlighted Barksdale in his recap of the Jaguars game , saying, "With Rodger Saffold sidelined with injury, Barksdale has seized his opportunity and graded positively in every game. There’s been a steady improvement in his grades since Week 1 and his performance against the Jaguars was probably his best to date."

It's one thing to talk about his play, another to watch it. Here's one play Breitenbach highlights specifically:

Barksdale's job is to get out to the second level and keep that hole open for Zac Stacy (also, you'll notice Jared Cook 'blocking' - at this point I'd rather have Alex Barron): 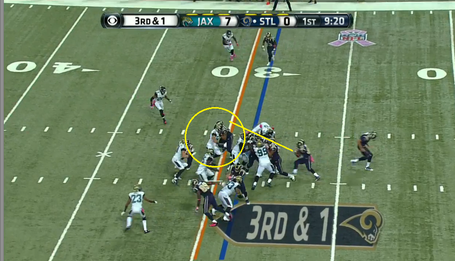 It works, and Stacy blasts through for six yards, nearly double the Rams season average.

It's more or less of the same throughout the match-up. Barksdale game isn't flawless; he has issues with speed and finesse moves. He needs to improve his footwork so he can keep up with those speedsters, but he's become much more comfortable than he was a month ago.

Against J.J. Watt and the Texans, his improvement is even more telling. Watt is the best defensive player in the league, and Barksdale held him to only a 55% success rate in influencing the play- when single teamed, no less. The Rams also did an excellent job of scheming out Watt, using Harvey Dahl and Barksdale to effectively neutralize him - according to PFF Metrics, he posted his first negative graded game ever - quite a feat by the right side of the offensive line.

I'll just leave you with this tidbit from Tyler:

again, #Rams OL is currently ranked as @PFF 6th best OL. Joe Barksdale is currently a top NFL RT, do you bench him with Saffold back?