Film Room: Breaking Down Tavon Austin and How The Rams Can Use Him Better

The rookie Tavon Austin usage has been discussed since the Rams drafted him, so why not take a closer look?

Share All sharing options for: Film Room: Breaking Down Tavon Austin and How The Rams Can Use Him Better

The St. Louis Rams made a big gamble in April trading up for the elusive and electrifying Tavon Austin, drafting him with the 8th pick of the NFL Draft. The Rams needed a wide receiver and Austin needed a field where he could be productive. It seemed like a match made in heaven. But as with life, it's never that easy.

This season the Rams rookie wideout is currently leading all rookie receivers with 23 catches, and he's in 3rd place with 2 touchdowns(along with 4 other players), and is 8th in reception yards with 156. Not bad, better than many would expect. But don't get fans started on his potential punt return yards that have been negated by penalties.

Austin appears to be on the right course, however there is a slight problem. So far he's been a healthier version of the Rams last slot receiver Danny Amendola. Case in point: Austin's yards on a catch is 6.8 which is the 34th best among rookies and his longest catch went for 25 yards. That's not what anyone expected, and this has caused many people to call for offensive coordinators Brian Schottenheimer job.

None. Preseason hype about gameplan reminded me of the Tebow Jets nonsense RT @SI_DougFarrar What was the plan with Tavon Austin? Seriously.

What was the plan with Tavon Austin? Seriously.

Schottenheimer still isn't getting blasted enough for having absolutely NO idea how to use Tavon Austin. He is clueless.

What type of receiver is Austin?

Austin is less of a receiver, and more of a weapon. Because of his small height - 5'8 - the Rams will of course have to use him in different ways. He's not going to out jump many defenders, and Austin has five dropped balls so far this season. He has his limitations like every other player in the league, but the Rams have to use him to his strengths, which is his elusiveness that made him famous in college.

Tavon Austin screen to the left

This play illustrates why I believe that Austin specific plays will rarely work right now.

The Rams have Austin and Chris Givens stacked, Austin is behind Givens. Which isn't a problem until you look on the field and see that it's just those two on the field as receivers. 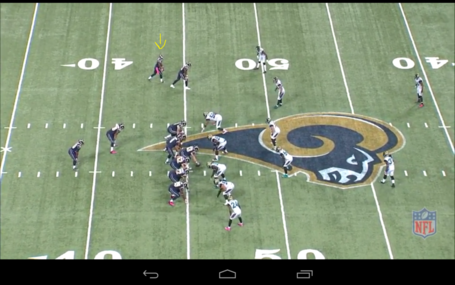 Horrible play call, but don't worry I drew up a variation of the play if you want to run it again. 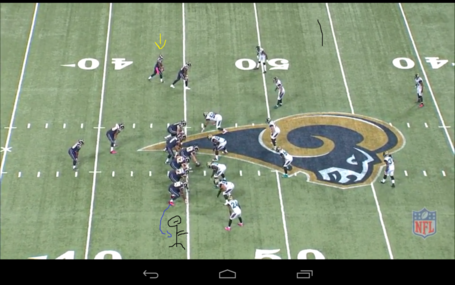 Cook - leaner than I remember, with a oval head - isn't going to block anyway.

Sometimes a receiver has to take matters into his own hands to get open, and this play is a great example.

Tavon Austin is in the slot to the left; the defense has the defender one on one with Austin. At the snap of the ball, Austin takes a step to the left to get the defender off guard and then streaks forward. The defender is beat as Austin streaks up the field. 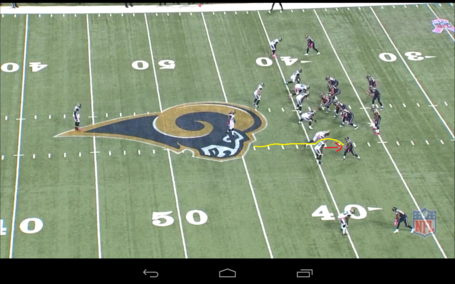 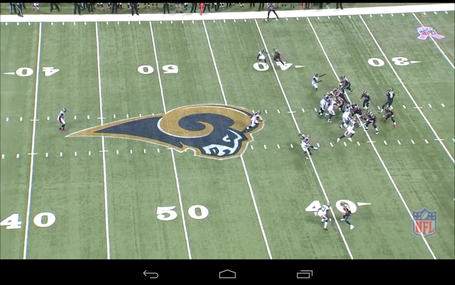 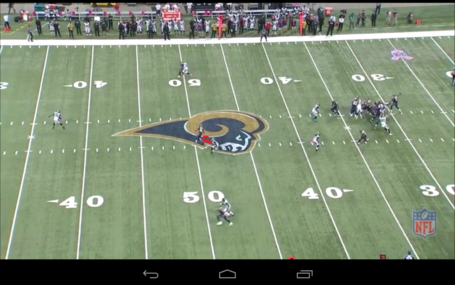 Here's the route from Bradfords' perspective. Right when he threw the ball the defender launched at his thigh,if Bradfords' protection would have held longer and he would have looked Austins' way the play could have resulted in a big gain. 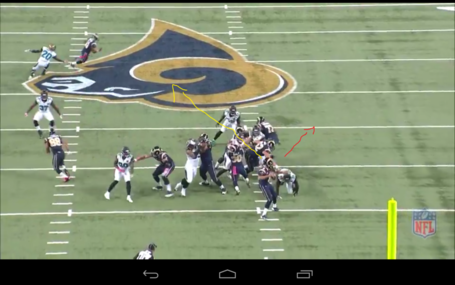 Tavon Austin in the slot catching a curl

Instead of pictures, this play will be broken down with a single GIF. The defense looks like a cover-3, with the inside defenders playing zone in the middle.

Tavon Austin is in the slot and get's behind the defender who thinks he has help. Austin finds a whole in the cushion and sits there on basically a 10 yard curl and Bradford spots him and throws a good ball to Austin over the defender head. Austin then shows his skills after the catch by gaining 8 more yards.

Plays like this should be where Austin benefits the most. Attacking the middle of the field with help from his teammates to get open and draw some of the coverage away.

What about punt returns?

It's simple: let Austin do the work. I'm not a coach, but if the Rams told their players to block and then release the players they were blocking when Austin leaves their area, it would work a lot better than letting them commit unnecessary penalties.

Case in point, watch Trindon Holliday from the Denver Broncos return a punt return against the New York Giants.

Here's the NFL Playbook guys discussing the play in more detail, it's around the 2:15 mark.

Simple right? Austin might not return punts for touchdowns, but it will get the referees off their back.

Who is at fault for Austin's production and can he play better?

Nobody. He's still a rookie, and while the Rams have stuck him in basically last year's offense which really doesn't benefit Austin, he can still make plays. I won't spend time arguing that the Rams should have changed their offense. The team has decided that they don't want to go that route right now.

Honestly, the Rams should use Austin specific plays as a decoy and attack another part of the field. That way, if a team flows to Austin, they can get a big play or a play to him that might actually work. Another way for the Rams to use Austin is the way his 20 yard catch happened. Have the other players attack the coverage, and if Austin is open throw it to him so he can get yards after the catch. Defenses aren't dumb, they know the Rams want to use Austin, so use that as an advantage.

Basically, what I'm trying to say is the Rams shouldn't change for Austin. He's still a rookie and there's no reason for all the pressure to be on him. Right now, he should be a piece of the puzzle, not the solution to a math problem.