The St. Louis Rams and Houston Texans have a very short history together. Sunday’s matchup in Reliant Stadium will help break more than one tie.

First, the Texans and Rams both enter Week 6 with a 2-3 overall record in 2013. A win - obviously - gets one team back on track, while potentially derailing the other. The Texans are the early 7 point favorites, according to Vegas Insider, but home field advantage didn’t mean imminent success in the two team’s first matchup.

You’ll have to dig down deep into your memory bank…to 2005. The Texans finished the season as the NFL’s worst team [2-14], and were rewarded the opportunity to draft Mario Williams as a result.

For the Rams, though, the win wouldn’t come easy. As a matter of fact, the game was tied at the end of regulation. The Rams eventually won 33-27 in overtime. Have a gander at this box score… 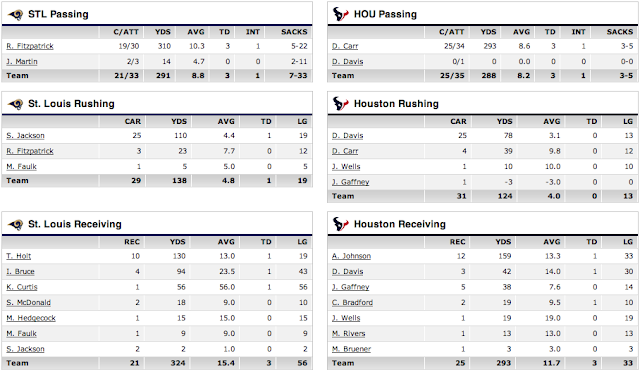 Steven Jackson was on the way to his first ever 1,000 yard season, and Torry Holt and Isaac Bruce were still doing what they did best…scoring TD’s. The only Bradford in the game, at that point, was Corey Bradford [WR, Texans]. Ryan Fitzpatrick, now with the Titans, lead the Rams to victory that day.

The only player in this box score that will be taking the field this Sunday is Andre Johnson. I think it’s fair to assume that if he has that kind of day [again], it will be a long one for the Rams. A nagging hamstring injury might slow him down though.

Four years later, the Rams still own the series 1-0, but the Texans would be traveling to St. Louis just before Christmas. Instead of being gracious, and bringing gifts for their opponent, they brought disappointment, as they bested the Rams 16-13. Series tied. 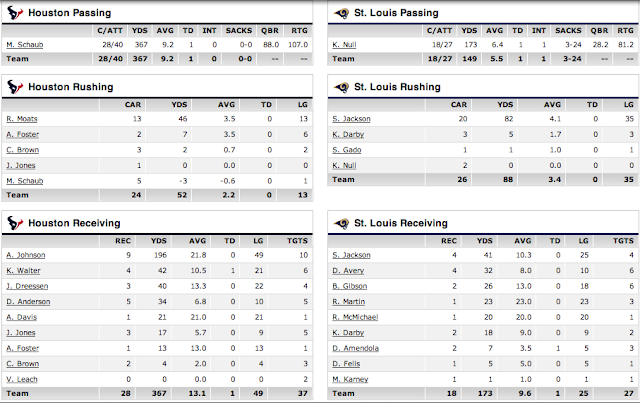 Four years removed, there are a few [maybe] more recognizable names. Matt Schaub, the Texans starter this Sunday, had a field day in the passing game, airing it out for 367 yards. Again, Andre Johnson proved to be his favorite target, nearly amassing 200 receiving yards. Will they have an answer in 2013? It’s been four years, but this is probably one game Andre Johnson is looking forward to.

Meanwhile, the Rams struggled in both the running and passing games that day. The Rams offense totaled 261 yards…over 100 yards less than Matt Schaub successfully threw for. Unlike 2009, the Rams will need to do well in the run game if the intend to remain in the game this Sunday. It’s been slow going thus far in 2013, but rookie Zac Stacy looks to help the Rams establish a much-needed run game. It’d be hard to imagine Sam Bradford throwing for only 173 yards - like Null - as he’s not thrown below 200 ypg this season. The Texans, though, have one of the NFL’s fiercest defenses, so yards through the air [and on the ground] won’t be easy to come by.

Here it is 2013, and the Rams vs. Texans all-time series is tied at 1-1. Both teams are looking to get back to .500 this Sunday. In doing so, one team will not only break the tie with their team’s 2013 win/loss record, but take the advantage in the head-to-head series. After Sunday, one team will own the series lead…for at least four more years.