Rams vs. Texans, questions to answer

The Rams will be hoping to keep their win streak alive when they face off against the Texans this Sunday.

Share All sharing options for: Rams vs. Texans, questions to answer

The 2-3 St. Louis Rams will travel to face the 2-3 Houston Texans this Sunday. Both teams have disappointed so far this season. The Rams want to start a winning streak after defeating the Jacksonville Jaguars and the Texans are hoping to stop their three-game losing streak against a team that has laid down against good teams.

This game has potential to be a close game or a blow out; it depends on which Texans team shows up and if the Rams can finally put it all together.

The Rams are coming off a dominating win, but there are still question marks for this team. Will the Rams be able to run the ball more constantly with Zac Stacy in the lineup? Can the passing game work throughout the game and not just late in the 3rd quarter? Is the Rams defense playing better, or is it a product of weak offenses they have been playing?

Finally, and most importantly, will Tavon Austin be given the game ball for encouragement again?

For the struggling Rams, it's important that they answer these questions. They'll be playing a talented Texans team on a downward spiral. A win against Houston, a team one year removed from a 12-4 record, would be great for the Rams. With that, and a win next week against the Carolina Panthers, it'd be a great morale builder for the team, the fans, and would bring playoff hopes back into the picture.

But it all starts with defending Texans star running back Arian Foster and their broken quarterback Matt Schaub.

It's been tough sledding for the Texans. Instead of Superbowl hopes, they now are hoping that they can make the playoffs. Schaub has become a hero for opponents, and by now, everyone knows about him breaking the record for pick sixes. It's not easy doing that for four straight games; even Blaine Gabbert or Mark Sanchez can't claim that title. Schaub isn't as horrible as those aforementioned quarterbacks, but stats talk to people. It isn't a surprise that he has a hamburger named after him and his new record.

Even though the Texans have fallen down a couple of pegs, their talent on paper is still good. Their defense is currently number one in the league and they have shutdown opposing offenses in the passing game. They've only allowed opponents an average of 260 yards this season, which is currently the lowest in the league. Their offense has been more tame, but it's not horrible. Of course, with Schaub preforming the way he has so far this season it's easy to overlook that.

The Texans will try to mask Schaub's poor performance by running the ball with their duo of Arian Foster, who was off to a slow start this season but has picked up his play, and Ben Tate, who has been able to shoulder the load so far. 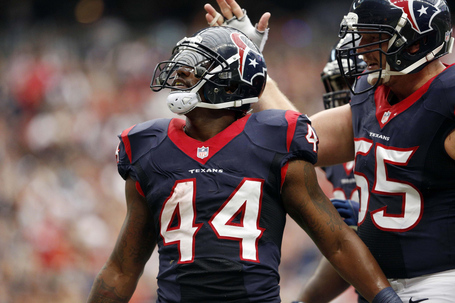 This game might not seem big, but for two teams striving for the playoffs, the difference between 2-4 and 3-3 is huge.