Four games down, and so are the Rams. The power rankings unkind.

This isn't going to be pretty.

As always, if there's a power ranking you think merits inclusion, let me know and I'll start putting it in. 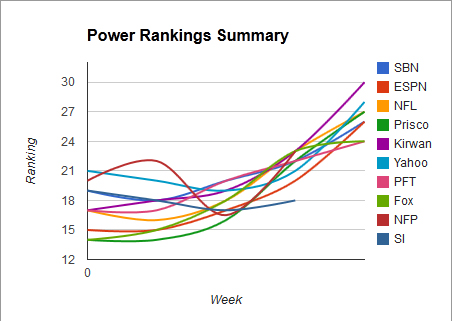 It was old home night in St. Louis, as the team welcomed back legends like Eric Dickerson, Kurt Warner and others. On the field, Jeff Fisher choreographed his own salute to the past with an homage to the Rich Brooks-era Rams.

Beware the trap game. At 1-3 already, the Rams (and Sam Bradford especially) can't afford to look past Jacksonville to their Week 6 game in Houston.

There's not much hiding the fact that St. Louis has been outscored by 48 points over the past two weeks. What's particularly embarrassing is the complete lack of a running game. Gaining 35 yards on 12 carries against Dallas was certainly bad enough, but running 19 times for just 18 yards at home against the Niners? Rams fans must be pretty frustrated.

They've been a first-quarter disappointment. What has happened to that defense.

Sam Bradford looked like a lost guy on the field last week and with zero running game, and the offense couldn't do a thing.

They looked decent in Week 1 and horrible in the three games since. If they look bad against the Jaguars this week, the problems are more significant than we realize.

At least folks in St. Louis won’t be all that upset if the team moves.

The Rams nearly punted the ball more times (11) than they had rushing yards (18) against the 49ers. Ouch.