St. Louis Rams: What If Sam Bradford Were To Go Down?

What would happen if the Rams were put in this position?

Share All sharing options for: St. Louis Rams: What If Sam Bradford Were To Go Down?

The St. Louis Rams have had an excellent start to their 2013 campaign. They’re 10 weeks into the season, boast a win/loss record of 6-4, and are beginning to look like a dominant team in the NFL. Both offensively and defensively, things have started to click for the first time in several years. 2013 could be the year the Rams break a playoff drought that dates back to 2004.

Their defense, over the past few seasons, has gained a reputation for stifling the opposition. They’ve shown an amazing ability to sack the opponent's quarterback; a statistic they lead [tie] the league in at the conclusion of the 2012 season. And though the defense has been heavily relied upon to keep games close, what was a relatively inefficient offense has become one of the better, more explosive offenses in the NFC.

Sam Bradford, a former number one overall pick, has begun to live up to the expectations that his aforementioned draft status demands. Despite a roller-coaster start to his young NFL career, pundits and fans have begun to take note of his ability to successfully lead the offense. The "make or break" days are behind him, as he’s now viewed as a leader of one of the NFC’s most dynamic offenses. All signs indicate a push for the playoffs, potentially a vying for a division title.

It’s now late November. The Rams are coming off of a bye week and are heading into Week 12 with momentum on their side, having just squeaked out a 27-24 victory against the Colts. The Rams now face the Bears, who also hold a record of 6-4, and are clearly in contention for a Wild Card spot. The Rams are three point favorites to win the game.

Reversing roles from a familiar scenario from 2012 [Week 10 v. 49ers], the Rams find themselves down 14-0 in the first quarter after the Bears successfully made their way into the end zone on their first two drives of the day. With 1:10 remaining in the first frame, Sam Bradford, who’s confident that he can quickly get his team back into the game, looks to run outside the pocket in an effort to extend a play which was rapidly breaking down. He scrambles left for a gain of four yards and - in a failed attempt to slide - gets hit hard by OLB Lance Briggs. The collective gasp from the Rams’ faithful was chilling.

Bradford shows the grit that you’d want any tough quarterback to show. He grimaces as he gets to his feet, pulls the turf from his helmet, and heads back to the huddle. It’s encouraging to see Bradford shake off the hit…one that appeared to have been dangerously close to his neck/head.

Sam would get a short break as the first quarter expired. He’d then continue to meticulously pick apart the Bears defense, completing the 80-yard scoring drive with a 14-yard strike to Jared Cook. The Rams are now down 14-7, with nearly three full quarters left in the game.

Having been provided with a much-needed breather, the Rams defense came out fierce on the ensuing drive. After forcing the Bears offense to a three-and-out, Tavon Austin takes a fair catch on the punt, downing the ball at the Rams’ 34-yard line.

Austin Davis trots out onto the field with the Rams’ starting offense. Sam Bradford won’t be returning to the game.

Davis hasn’t played a single down in the regular season. It’s been over three months since the last time he found himself under center. The last time Davis took a snap in a game-like situation was in Week 4 of the preseason.

After beating out veteran Kellen Clemens for the Rams’ backup job, Davis now has the task of leading the Rams to victory, already down a score. Davis, albeit against 2nd string guys and masses of players who didn’t make an NFL roster, was able to successfully find the end zone during the preseason three times. Furthermore, he minimized costly interceptions in the process. Can he replicate that when it matters most?

Would you feel confident in Davis’ ability to lead the Rams to victory?

In limited work, and with little footage of Davis against starting defenses, it’s difficult to determine how he’d fair in the remainder of the game. Davis’ arm strength comes into question, and despite the TD totals there’s a serious concern that he’d be able to successfully manufacture sustainable drives.

For instance, in last night’s game against the Ravens, Davis attempted 13 passes. His accuracy downfield was borderline non-existant, and it was clear that he preferred to utilize dump off passes and screens on passing downs.

* Screen Pass to Isaiah Pead for 11 yards. Pass was caught 4 yards behind the line of scrimmage. Pead makes a nifty move on a would-be tackler, turning a 2-yard gain into 11.

* Dump off pass to Isaiah Pead. Pass caught 4 yards behind the line of scrimmage. Pead beats the linebacker outside, prior to being tripped up after a 5 yard gain.

* A dump off pass to Benny Cunningham. The ball is caught on the 50-yard line [line of scrimmage]. Cunningham is immediately met by a Ravens defender, but barrels through the would-be tackler gaining 7 yards on the play.

* Davis finds Nick Johnson on an inside slant route for a 4-yard TD.

* Dump off pass to RB Chase Reynolds. The ball is caught 1 yard behind the line of scrimmage [18], Reynolds then breaks three tackles to run in for the score.

…That’s a significant amount of checking down. Only two of Davis’ six completions were thrown beyond the line of scrimmage, and 40 of his 50 completion yards were a result of broken/missed tackles caused by the running back he checked down to. His remaining seven attempts [which were obviously incomplete] were all thrown beyond the line of scrimmage [Veltung x2, Johnson x2, Cunningham, Blake, Lutzenkirchen].

With that being said, let’s assume that the hit Sam Bradford sustained is going to keep him sidelined for the remainder of the season [graphic below], how are you feeling about the Rams' chances of achieving anything resembling Kaepernick-like results from their backup QB and continuing on their trek to the postseason? 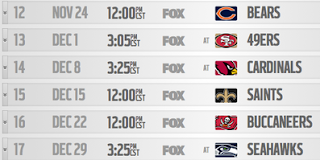 To be fair, it is the preseason, and it’s a very small sample size in which to fairly judge Austin Davis as a QB. With that being said, he also wasn’t facing the steepest of competition, and - in case you’re not familiar - the NFC West is the toughest division in football. The reality, though, is that Davis could very well be the Rams’ backup QB when the season kicks off, and he’ll need to be ready to go when called upon.

Continuing with our hypothetical, if the Rams were to have started the 2013 season with a 6-4 record, how do you feel about Austin Davis’ chances of leading the team to the playoffs with their final six games ahead of them? Make sure you cast your vote below…