The sun never rises. It's our daily trompe-l'œil, and our first. The sun doesn't move. We do.

There is significance here in our illusion. It is timely. It is necessary. And it is beautiful.

We know that the darkness fades, exploding somewhere into a palette of colors rubbed into the sky above the Southwest, the light creeping through the coniferous blanket over the Pacific Northwest, the orange haze soaking through crops across the Plains, the steam that plumes from metal castles into the clouds and filters into the missing horizon for the dawn's Rust Belt cocktail of the eye.

Morning comes and goes. To not mark it would be sad. Pay attention.

Preview after the jump.

For game-related info, check out the SBN page for the game. For Lions news leading up the game, check out Pride of Detroit. Here's the injury report.

On the other hand, the Rams have almost an entirely new cornerback unit. Cortland Finnegan, Janoris Jenkins and BFB are likely to feature heavily. How does Trumaine Johnson fit in? Keep an eye on how quickly the Rams filter in some nickel sets from the 4-3 base. Knowing that the Lions passed the ball nearly twice as much as they ran it last year, the Rams need to come out prepared to play the pass first and foremost.

While this doesn't come with the talent the above matchup does, it's equally as interesting to me. Detroit's top two running backs are out for two very different reasons. Jahvid Best is yet to return from his second concussion sustained in October of last year, and isn't eligible to return until Oct. 22 this year. Mikel LeShoure is suspended for the first two games of the season for his contribution to the team's seven arrests this offseason - a pair of marijuana possession charges just more than a month apart. That leaves Kevin Smith, who the Lions cut last year, to take over starting duties. Keiland Williams is the backup, so it's not the most fearful running attack.

The Rams' defense was fearful, just not to opponents. How much has changed with the linebacking changes, including Jo-Lonn Dunbar, Rocky McIntosh and Mario Haggan? Will they be able to fill in gaps that Chris Chamberlain, Brady Poppinga, Ben Leber and Bryan Kehl didn't? Of course, much of this depends on the D-line...

...speaking of which is a great battle on its own. The Lions' front five is experienced and proficient in pass protection, allowing just 36 sacks (the Rams allowed 55) and receiving a 5.9% adjusted sack rating from Football Outsiders. On the other hand, they were 31st in adjusted line yards according to FO.

Where does that put the Rams then? We know that DEs Chris Long and Robert Quinn should form an impressive tandem in the pass rushing game this season. Working against Jeff Backus and Gosder Cherilus (and perhaps backup Riley Reiff) should be a good week one test. With Michael Brockers and Darell Scott injured and out of contention, the interior D-line could be a problem. Kendall Langford, Jermelle Cudjo and perhaps Kendall Heard will need to give the Rams' defense enough punch inside to allow the rest of the defense to cover down for them.

Oh, the Rams' offense. Where neither form nor function existed last year. This year could be entirely different, sure. May our hopes turn into reality at least somewhat.

The Lions have injuries in the secondary that have taken both CB Chris Houston and stud FS Louis Delmas out of action on Sunday. That certainly lightens the load here. That leaves some combination of Jonte Green, Bill Bentley, Jacob Lacey, Kevin Barnes and the newly signed Drayton Florence at cornerback.

For the Rams, we don't really know, do we? Sure, we have a sense of how Danny Amendola will be used...beyond that? I'm probably more excited about this area more than any other.

Expect this to be the focus early on. Head Coach Jeff Fisher and Offensive Coordinator Brian Schottenheimer are likely to push Steven Jackson into early work to try and overplay the run. It's going to be a bit ugly (and perhaps a bit scrappy) in the first half. If the Rams can move the chains without having to throw the ball 8-15 yards downfield early on, that's success number one. From there on out, it's war chess, baby. Also, let's see how the staff wants to work in Isaiah Pead and Daryl Richardson, who had one heck of a preseason. The opportunity to spell Jackson could be crucial over the course of a 16-game regular season, but will they opt to do so out of the gate? In Steven Jackson's rookie season, he took roughly 40% of the carries while Marshall Faulk had the other 60% to deal with. I don't think anyone expects a ratio near that, but could it approach 75/25 by season's end?

In run defense, the Lions offer an interesting running defense in 2012. Sure, the defensive line plays an integral part. Justin Durant is one of the more underrated Sams in the league. And while MLB Stephen Tulloch doesn't get rave reviews, he's a solid 4-3 Mike.

Well, here we go. Rodger Saffold, Rok Watkins, Scott Wells, Harvey Dahl, Barry Richardson. There's a decent chance that the previous sentence is your 2012 season. Now it depends on health. Wells isn't 100%, and offensive lines aren't the safest place on a football field. We know this isn't an elite line. The thing is, it doesn't have to be for the Rams to win a half dozen games or more this year. It has to be acceptable. It has to allow Steven Jackson opportunity to work, let's say, two of every three carries. If the offense (relying on a running game and short passing game) begins to open up and when it does, it has to keep Sam upright more often than not. There's a challenge to be had then in week one.

In Cliff Avril and Kyle Vanden Bosch, you have defensive ends that will put tackles to work. Inside, Ndamukong Suh, Corey Williams and Nick Fairley should be able to threaten any inside O-line in the league...as long as they stay out of trouble on and off the field. In any case, this is a line that can threaten the Rams' starting O-line from the first possession to the last.

This week's top 3 storylines brought to you by Mercedes-Benz Fashion Week in New York City, NY: 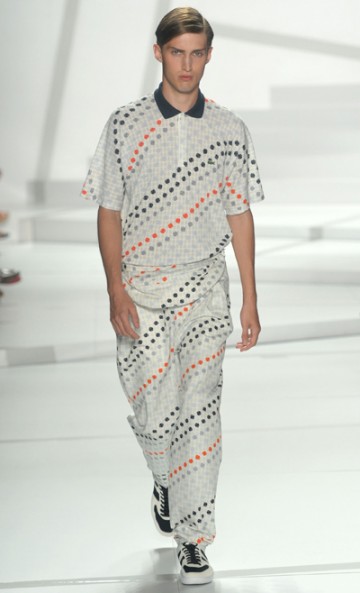 Ok, first off, an admission. I don't know anything about "fashion." Style? Sure. I learned the rules on suits, shoes -- all the stuff you expect from a respectable, professional male. The rules Don Draper and Roger Sterling had to follow. The rules your grandfather followed. The rules you should follow. That's style. Fashion? Seems like a huge waste of fabric for an art show. But hey, as long as nobody gets hurt, have fun,

That being said, this one jumped out at me. It looks like a bad bedspread for your 10-year-old son. And if you button the top button on your polo, you likely took insult when I said fashion is stupid. Look at this guy's hair, and try to not want to punch him the face. 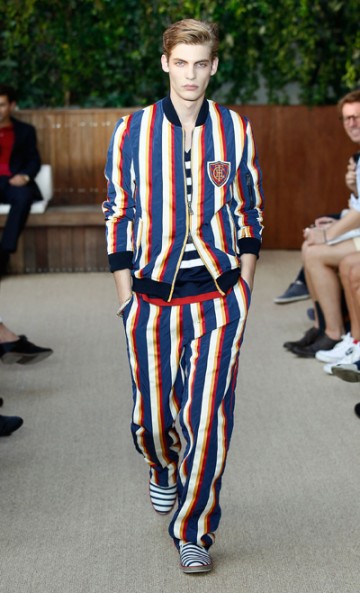 It was at this point I started wondering if all male fashion is is coming up with outfits that look like the sheets you would put on that race car bed we all wanted when we were little. What's most impressive? Vertical stripe jacket and pants, horiztonal stripe shirt and shoes. Identity crisis or deceptive mystery?

Such is the Rams' offense. Figuring out how we want to balance Steven Jackson's workload with the depth behind him, as well as making sure Sam gets the season off to a decent start, is important. Identity crisis or deceptive mystery? We'll see. 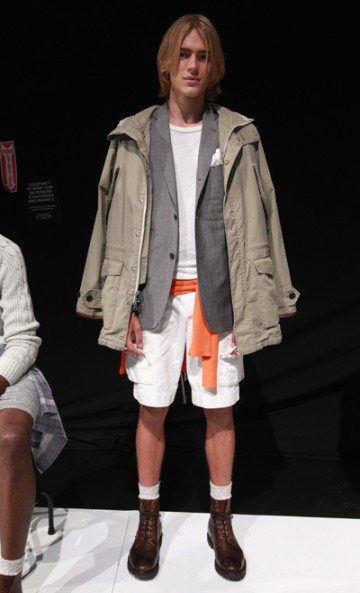 This is confusing. What is that orange thing? Why would you wear an overcoat over your jacket with shorts? Nice pocket square there, Jimmy Orangebelt. I understand confusing your opponent. But this is just confused.

The Rams are a young team with a new coaching staff. Getting on the same page early is key. Knowing their roles and trusting each other will take time, but a clear plan that makes sense needs to be implemented...well, by yesterday. If we end up playing the way this cat looks? The open threads tomorrow are gonna get salty...