Share All sharing options for: St. Louis Rams, Week 3: A look back, sack by sack

Six sacks. It was a startling performance by the St. Louis Rams last week, and one that brought up the specter of seasons past. It also doesn't bode well for a game this week against Seattle, unless the Rams make some serious adjustments.

Let's go back and look at what happened last week, sack by sack.

First possession, first sack ... it set up what was going to be a long day for Bradford.

The Bears are lined up with seven guys all pretty close to the line. It was a look they used often in that game, with much success. Amobi Okoye just shoots right through the B-gap, around Harvey Dahl with no problem. Richardson does a nice job engaging his man, and Steven Jackson heads off to the flat. 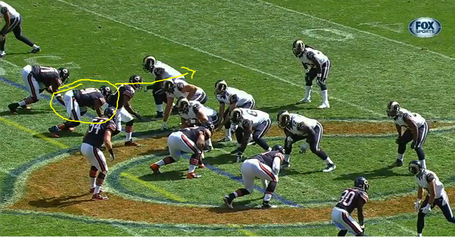 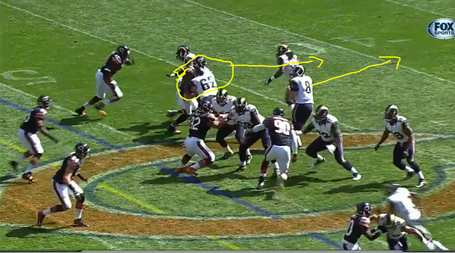 The last drive of the first quarter started off on the wrong foot. Chris Givens had the ball on shot route, but Tim Jennings deflected it out of his hands to break up the play. It was a really nice move. The next play, on second down, was the ugly drop by Brandon Gibson that might have been a touchdown.

The Bears come up to the line again with seven men on the line. At the snap, only four rush up field. Both Shea McClellin and Stephen Paea get credit for the sack. McClellin, drags Richardson with him on his way to Bradford. Paea fires off the line, bumps Ojinnaka to get him out of the way and barrels down on Bradford.

Now we're in the second quarter, on the Rams' first possession of that frame. Daryl Richardson started the drive with his 12-yard run, the only notable running play of the game for the Rams. They pick up a yard on the resulting first down, setting up this play:

This sack was pretty simple; Bradford's foot got caught by the center.

There's not much to see here. Bradford gets the snap, but his receivers never get open. He holds the ball for almost six seconds, rolls out to his right, finds nothing and goes down with Nick Roach flying at him.

He has two backs in blocking for him on the play. Kendricks stays in to block too, so he really only has two target options, which is a problem against the Chicago corners. Bradford might have hit Richardson, who he looked at just a yard or two past the line of scrimmage, but Richardson had Brian Urlacher on his back.

This is on the same drive as the previous sack, scored 10-6 on the last possession of the third quarter.

The Rams line up in a shotgun formation with three receivers and a tight end out wide. Jackson is in the backfield, and the five offensive linemen are on their own to handle the pressure. 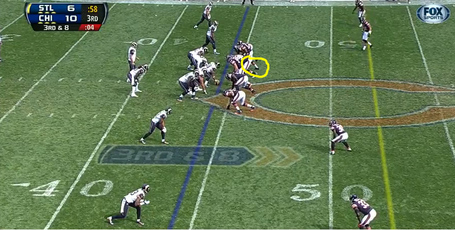 Julius Peppers is lined up over the guard, Ojinnaka. The defender standing next to him drops back at the snap.

Peppers comes off the snap, engages for a second with Ojinnaka, and then pulls off to come around the left side of the scrum, Peppers' left, where he finds Bradford waiting on Amendola out to the quarterback's left. 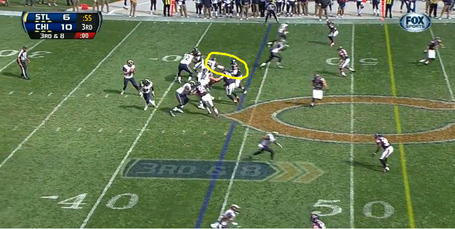 While Peppers races in for the sack, Wayne Hunter's man, Israel Idonije, tosses him aside and is there to combine with Peppers for the play. Notice Steven Jackson open for the check down? Bradford sees him, but only when it's too late. 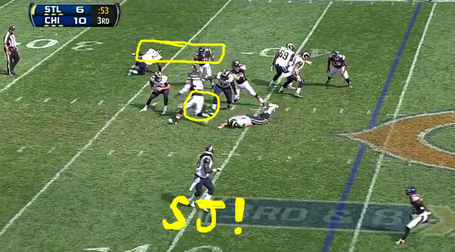 It's late in the fourth quarter and the Bears have a 20-6 lead. The Rams offense is trying desperately to make something happen, which also means putting itself at more risk. There's nothing special about this one. The offensive line gets overwhelmed. Idonije gets around Rochardson and gets credit for the sack, but it was coming from there or through Ojinnaka or Hunter. 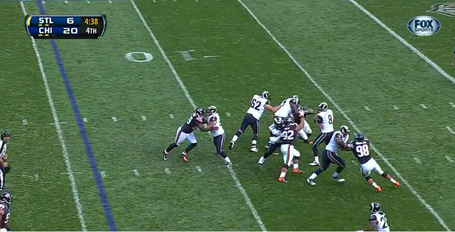 The only notable thing here is Dahl, not engaged. He briefly gets Idonije, and probably should have offered more help for Richardson. Still, the angle made it harder than it looks.