The NFL replacement refs are going away soon, but they left the St. Louis Rams a few things to remember them by through three weeks of the season.

The St. Louis Rams have had their fair share of run-ins with the NFL's replacement referees through three games this season. That may be changing, and none too soon. The controversial blown call that cost Green Bay a win was the straw that broke the camel's back, and the regular refs could be back on the field as soon as Thursday night. It can't happen soon enough.

"We're putting a price on the integrity of the game and it's tough to watch," Rams defensive end Chris Long said after Wednesday's practice.

Larry Fitzgerald said the same thing in an interview I did with him on Tuesday.

Rams head coach Jeff Fisher has been more politically correct. Understandable. Coaches sit in a nebulous place between the players and the owners, serving at the whims of the later. He certainly had every right to be as, um, animated as 49ers head coach Jim Harbaugh or even $50,000 poorer like Patriots head coach Bill Belichick.

The Rams had several of instances in which the replacement officials made costly errors that counted against them. Of course, you could almost put the entire Week 2 game on the list, as the replacement officials, the same ones who called Monday's game in Seattle, allowed that to turn into something closer to a bar room brawl than a professional football game.

Sticking to individual instances, here are the three most costly run-ins the Rams had with the replacement refs this season.

With less than 40 seconds until the two-minute warning in the fourth quarter, Sam Bradford scrambled with the ball and slid near the sidelines. The refs on the field determined that he was not out of bounds, but the clock operator, who is not a replacement official, stopped the clock, throwing it out of sync with the play clock.

The result forced the Rams to run a quick third-down play rather than wind the clock down to the two-minute warning. The replacement refs are not responsible for running the clock, but their more experienced, locked out counterparts often work in coordination with the timer, making sure it matches up.

2. The touchdown that wasn't

A running play on 3rd-and-1 in the second quarter of the Rams' Week 2 game against the Redskins became far more memorable for a non-controversy that Steven Jackson was benched for spiking the ball and drawing a flag. (His groin was hurt).

Jackson only spiked the ball because he thought he scored a touchdown. He did, he did score a touchdown, but the replacement officials completely missed that one. Not surprisingly, it was the same fine crew that worked the Seattle game on Monday.

I mean, maybe I'm wrong, but I think this is a touchdown? 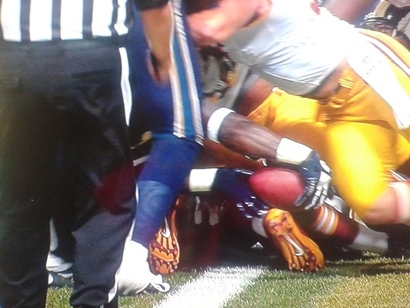 Yep, that's a touchdown alright. The line judge in that game, the same one that gave Golden Tate a touchdown, is also this guy.

Against the Bears, linebacker Mario Haggan was flagged for roughing the kicker/unnecessary roughness in the first half on a Chicago punt. That penalty gave the Bears the back inside the Rams' side of the field. Chicago kicked a field goal on the play.

The problem is, according to Jeff Fisher, Haggan should have gotten the flag for running into the kicker, which would have added the penalty yardage onto the Rams resulting first down. 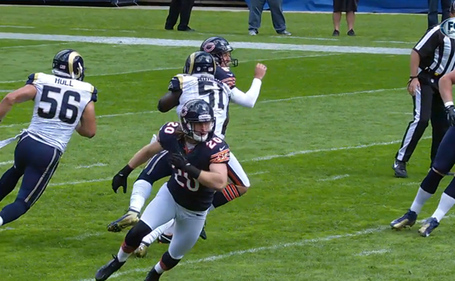 So long replacement refs, we hardly knew ya.