Don't panic: The Rams secondary will keep them in games

Three interceptions and a narrow field, the St. Louis Rams secondary is good enough to keep the team in every game it plays this season.

Share All sharing options for: Don't panic: The Rams secondary will keep them in games

I'll admit, I’d rather be discussing who’s getting a game ball this week than finding a silver lining, but that's not the Rams current reality. The Rams, who now find themselves at 1-2, have a lot to be proud of, and a lot more to look forward to. It’d be overly-simplistic to look at the record and revert to a 2011 mindset, but we’re only one win away from being .500, and I’ll tell you why it’s not farfetched despite your Monday morning head-hanging.

If the title of the post didn’t give it away - and I was sure it would - it’s our secondary. Not surprised? Well, you shouldn’t be. And I’m not just referring to the ‘defense wins games/championships’ adage…I mean it specifically for the 2012 Rams. The offense, despite a makeshift line, has surprised at times, yet depressed in others. For every great Danny Amendola game, you’ve got your…well, Gibson's. Despite it all, the Rams defense has kept them competitive through the first three weeks, and here’s my take on why that’s not going to change...

For the majority of the 2011 season, the Rams heading into half was a good time to over-indulge in adult beverages, fix some drywall that was damaged in the first 30 minutes, or hop on your favorite team’s blog and point the internet finger at certain players or coaches. There was little hope that coming out of the locker room would provide results contrary to your now-intoxicated expectations. Through the first three games last season, the Rams started the second half of their games having been outscored 65-16. No calculator? That’s an average defecit of 22-6…two touchdowns and field goal that they’ve got to make up in order to win. And needing the defense, who gave up those averages, to play lights-out defense in the second half of the game. We all know how that went. 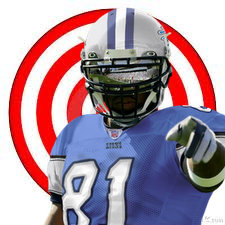 It’s a different story in 2012. Through the first three games this season, the Rams have only given up 41 points in the first half, while scoring 32 points on offense. In the season opener, the Rams lead going into halftime against the home Detroit Lions [who do have an explosive offense], 13-10. Keeping the Matthew Stafford-to-Calvin Johnson combination in check was a necessity if there was any chance of keeping the game competitive. I covered the Week One Target prior to the game. For Jenkins and Finnegan, playing each down to it’s end was a must, and the results - at least in terms of coverage - were positive. Yes, Megatron got to the 100-yard mark during the game, but it didn’t come easily, and if not for a lone 51 yard catch in the second half, he’d be waiting until week two to break the century mark. He was, however, unable to find the end zone during the game. I’m not big on shoulda-coulda-woulda’s because they mean absolutely nothing in the win/loss column, but had the last ten seconds of that game gone differently, the Rams would still be a winning team. Though they didn’t, the 2010 Rams, who folded 6-44 at Detroit, wouldn’t have been made the game competitive [trailing 24-6 at halftime].

A lot of the praise is being pointed at the secondary, and for obvious reasons. Last season, the Rams secondary made young wide receivers look like pro-bowlers. Without providing you with too much statistical heartburn I’ll mention Torrey Smith and Jordy Nelson, and then move on. The 2012 [upgraded] secondary, after week one’s multi-INT, single TD performance against Matthew Stafford, deserved our respect.

Week two provided a completely different type of matchup. Washington Redskins quarterback Robert Griffin III was riding on high after week one’s win over the [now completely defeated] Saints, and made RG3 look like the world-beater that all the Subway and Gatorade commercials conveyed him to be. With Pierre Garcon [inactive] being their number one receiver [based solely on his contract, and not necessarily on his performance], containing the rookie QB, both on his feet and his new potential weapon, was a must. How would the defense respond?

RG3 did his job…on the ground. Give the man his propers, but it’s hard to contain a guy with that kind of athletic ability. He tallied 82 yards on the ground - his second highest of the very short season - and successfully found the end zone twice. I’ll dare him to maintain that for 16 games. Furthermore, I’ll dare the Skins to test him for that duration. In the air, however, he didn’t fair so well. Griffin was able to throw for 206 yards [1/3 of came on one particular poorly covered play], but also was only able to find the end zone on that lone pass, and able to find Cortland Finnegan’s hand’s for his second INT of the season, and in route to the Rams first victory. Minimize it if you want, but the Spagnuolo-lead Saints defense gave up 320 yards and 2 TD’s to the rookie in his NFL debut…not to mention a 139.9 passer rating. That’s a far cry from the 86.3 rating against the Rams.

Back to the point, though, the Rams actually trailed this game going into half; 21-16. Certainly within reach, the defense held the Skins to a mere seven points in the remainder of the game, and a goose egg in the 4th quarter. The defense did it’s job, and the defense kept it competitive. Even allowing for the amazing performance by Danny Amendola, the defense won this game. As an aside - Sorry to the Alfred Morris fantasy football owners of the world…Hope he treated you well against the Saints, because he had no TD’s for you in week two.

Coming into week three, aspirations were high. The Rams just beat the Super Bowl bound - delicious sub endorsing, rehydrating beverage drinking - Washington Redskins. Beating the Chicago Bears was certainly plausible. The Bears, much like the Lions, had a QB/WR tandem that the Rams just couldn’t ignore. Brandon Marshall, though mentioned just as often for controversy as touchdowns, is a lethal weapon that would once again prove to be a test for former pro-bowler Cortland Finnegan, and rookie Janoris Jenkins. How would the they respond? Whether it was simply the coverage from Jay Cutler’s viewpoint, or a ploy to surprise the Rams with more looks for Alshon Jeffery, the play by the Rams secondary was commendable. Marshall finished the game with five catches for 71 yards, while Jeffery hauled in five more for 45. Barely eclipsing 100 yards as a tandem, neither were able to show any form of end zone celebration during the game. Another battle won by the Rams secondary. Jay Cutler finished the game with a 58.9 passer rating, throwing for 183 yards and INT. The Rams defense kept another game close/winnable going into half; 10-3 Bears.

Oh yea…team game. Let’s face it, a lot of the successes of this secondary has plenty to do with what’s going on up front. Robert Quinn is getting the playing time that he probably should’ve seen last year, and although Chris Long’s stat line isn’t overly impressive, teams know he’s there. The linebacking corps has improved from that of last year, with a couple of non-cavemen playing the OLB position. And this is all without Michael Brockers, who will look to improve the Rams rushing defense sooner than later. When he does return, I look forward to posting one of these about the defensive line in the near future.

For the Rams ability to defend the pass, it shouldn’t go unnoticed, and it shouldn’t go without praise. Quite honestly, it was difficult to watch pass plays in 2011. A play could go from eight yards to eighty-eight yards in seconds. Jeff Fisher, Les Snead, and the entire coaching staff have put together a fine product on defense. We’re three games into the season, and there’s plenty to be excited about, and plenty to be proud of too. You’ve probably noticed it…I just wanted to remind you. Losing is never fun, and unfortunately it’s become a norm for past Rams teams. And while there are still going to be woes on the offensive side of the ball - until we shore up a young, oft-injured group of lineman and wide receivers - let’s not forget the solid contributions on the defense.

There will still be big plays that you will not want to watch. In time, that may dwindle. Subtract those big plays from the first three games, and you’d be surprised with the Rams pass defense. Currently, the Rams are 16th in pass defense. Even with the ‘big plays’ given up to the aforementioned WR’s, the Rams are a mere 23 yards from 13th…the ‘mighty’ 49ers, and 20 yards shy of 14th…the woeful Colts. Take what you will from it, and again it’s early in the season, but this defense [secondary, included] is only going to improve. Watching them do so is a win in my mind.