Tevin's Journey To The Dome

Share All sharing options for: Tevin's Journey To The Dome

Wow. that's all I could say after the Redskins missed the field goal.

The game shouldn't have been close, but it was as RGIII was driving down the field looking like he was Mike Vick after every long scramble.

Then somehow, some way, the defense tightened up. Instead of a touchdown, it looked like the Redskins would get a field goal, and the game would most likely go to overtime...but, Cortland Finnegan saved the day by drawing an unsportsmanlike conduct penalty on Josh Morgan and turned a 47-yard field goal into a 62-yard field goal try that was ultimately missed.

That was the ending to the Rams' first home game and my first time being in the dome. You couldn't pick a better way to end a game then that. For those who weren't able to attend, you missed a hell of a game. Even though the games are on T.V. or an internet stream, there's nothing like being there in person and rooting your team on with other Ram fans.

I never experienced that before, living in Arkansas, and I'm happy I got to experience it on Sunday. After the jump, I will talk about the dome (which was amazing) and some more notes on what I saw while watching the game. 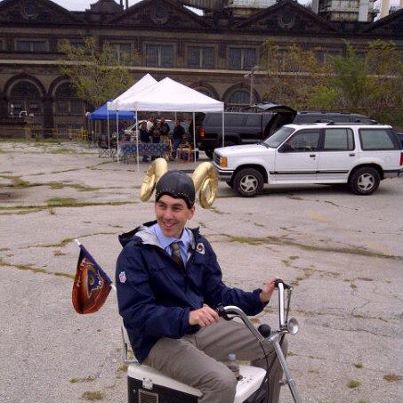 Let's start this off right, my friend Aaron, who is a moderator for www.RealRamsFans.com, asked me a couple of months ago if I wanted to go with him to the Rams and Redskins game. Of course, I said yes.

We drove six hours to Saint Louis, and while we were driving to the hotel, I was able to take this great picture: 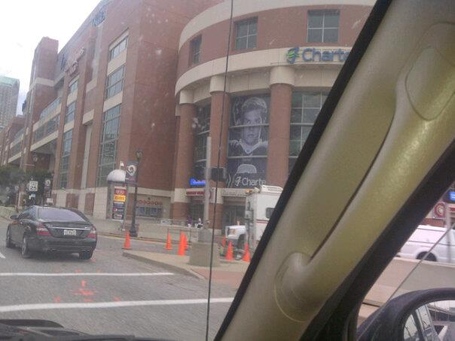 Alright, let's fast forward to Sunday morning, because if you followed me on twitter, at @t_bron, you know that me and the other Ram fans I met on twitter prior to the game had a great time. It was so great that if we put pictures up, the FBI would suspend SB Nation, and I would be in jail somewhere learning how to dance.

But I would like to say that meeting everyone made the trip that much special, so special thanks for making Saturday night and Sunday great, Aaron, @chonbon15, @JonCantTweet, @nat_0103, @brandipate and everyone else.

How the Rams are trying to make the fans happy

I can honestly say that the Rams care about their fans. Kevin Demoff, the Rams' Executive Vice President of Football Operations & Chief Operating Officer and friend of TST, came to a lot where a lot of season ticket holders were tailgating and actually talked to people. He also took that picture before the jump for us. If that's not love, then what is? 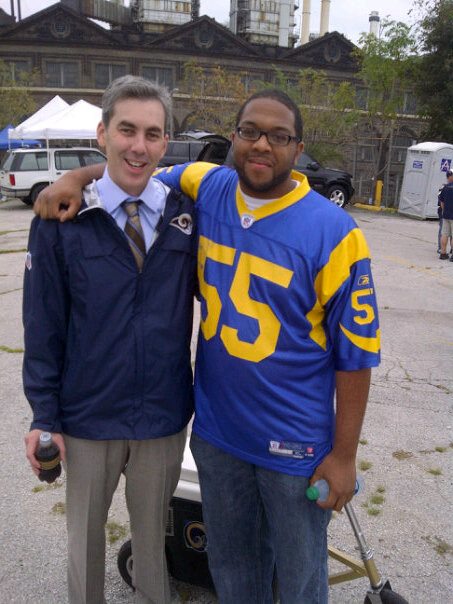 Not only did they visit our tailgate, but the Rams had an official tailgate outside of the stadium. I didn't attend, because I went to the sports bar (I don't drink) with the Rams twitter game, and then we went to the stadium. But, it was loud and everyone seemed like they was having a good time there.

Also, the Rams have been reaching out on their Facebook and Twitter accounts also. They have really stepped up their social media game, and that's a big plus.

It was amazing. I walked in the dome expecting high concession prices, and fans to be eating cheese and drinking wine while reading the Times, checking their many bank accounts.

I was wrong...except on the concession prices. $7.50 for a watered down drink isn't the best deal in the world. But as soon as I walked into the dome, the atmosphere felt like a big football game was about to be played there.

The best thing about the game was that fans were loud and stood up. No usher told us to sit down once, which I heard was an issue in the past. On defense, everyone got loud, and not just on third downs. I heard from a lot of people that the dome hasn't been that loud in a while.

!!!! RT @kidnoble Still can't believe that game yesterday. We won. I missed that feeling. When I tell you the dome was HYPE?! Man.

@niceguyb28 like none I've ever experienced. Loud. Into it. Crowd pumped up players, players pumped up crowd. Everybody knows it's a new era

In the 4 years I've been coming to games I've never heard it so loud in here. #Rams

Atmosphere at the @stlouisrams game is phenomenal. Finnegan with that pick and the dome blew up! Let's do this! Go Rams!!

All credit to this video goes to StlRams Superfan, but it doesn't do justice to how loud the dome really was. A Redskin fan told me that he didn't care if they won or not, because RGIII proved that he could play in a loud stadium. How many times have you heard that said about the dome before?

Thoughts on the game

The Rams won!!!! Oh, something more specific. Fine, I got you guys.

In the first half of the game, there was a lot of pushing and shoving after plays. It happened at least three or four times during the first half, and might have been one of the reasons Josh Morgan cost his team the game. There was a lot of emotion on both sides of the ball. Fisher has an aggressive team that doesn't just lay down for the other team to beat on them, which even if you weren't at the game to see it, you should have noticed it when we came back from 21-6.

I'm not even going to mention the defense, because I didn't watch it that closely and I haven't had the time to re-watch the game.

The Rams wide receivers got open this week. Sam's season depends on how well the receivers can beat one on one coverage, and obviously how the offensive line protects him. Both of those units had strong games. The offensive line played better then I thought it would when Rodger Saffold got hurt. It's obvious that Danny Amendola is Sam's go to guy now. As he gets used to the offensive system, don't be surprised when he starts throwing to more guys, because there were deeper routes open.

The Rams should have won by more. Brandon Gibson should have had two touchdowns, Jackson should have gotten a touchdown, and there was one long drive by RGIII that was the result of the replacement refs bailing the Skins out.

At the end of the day, it was a great game and a great time. If you have a chance to go to a game you should take it. This is a new era of football, and I'm glad that I got to experience it. 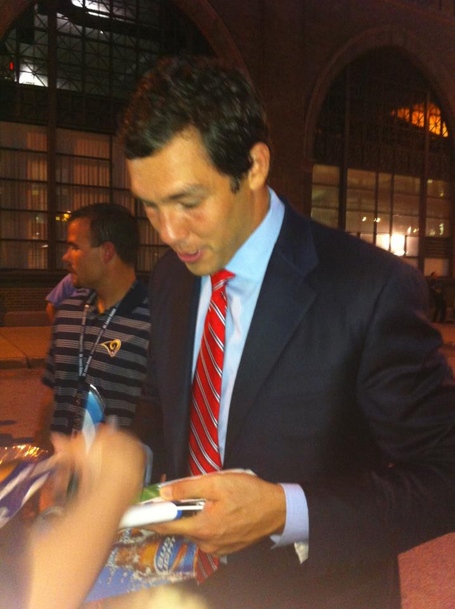 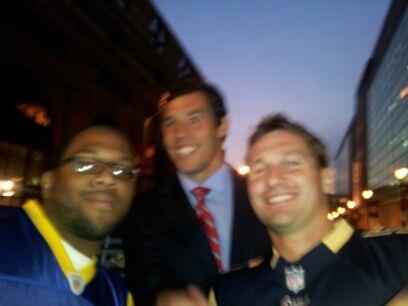 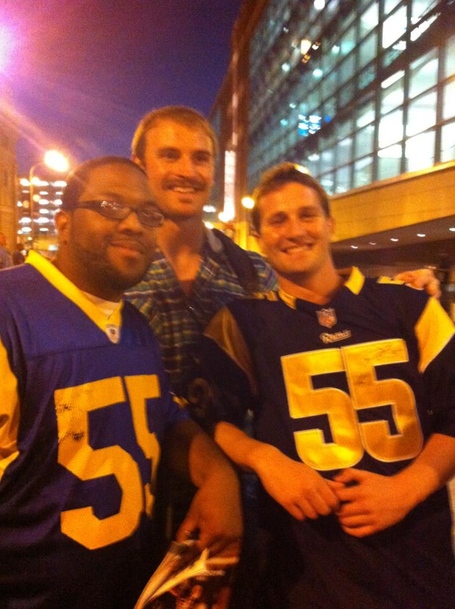 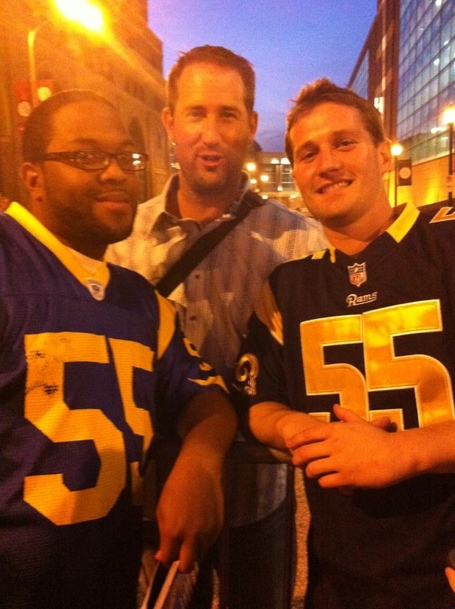 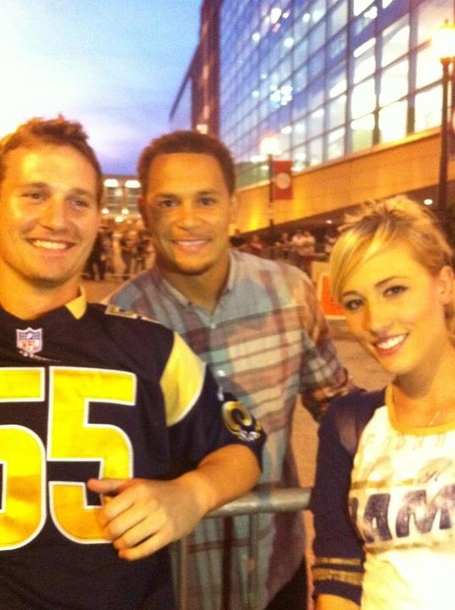 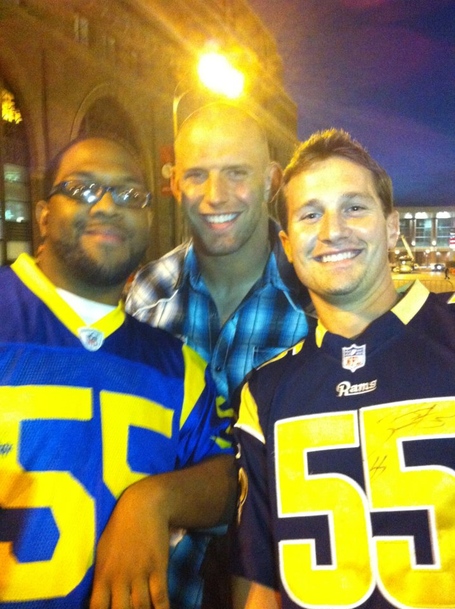