In Too Deep: How Calvin Johnson Found A Hole In The Rams Coverage

Share All sharing options for: In Too Deep: How Calvin Johnson Found A Hole In The Rams Coverage

Jeff Fisher offered a few ruminations this week on the late game performance of his defense in Sunday's loss to the Detroit Lions. A unit that had performed above and beyond expectations, picking off Matthew Stafford three times in the first half of the game, missed a few opportunities to close things out in the fourth quarter as the Lions mounted a game-winning touchdown drive.

"We had a couple guys that got confused with trying to fit routes ... Guys were dropping a little bit (too deep), too concerned about the big play down the field to Calvin. As a result, we allowed some chunks."

Here's the formation right as the ball is snapped. 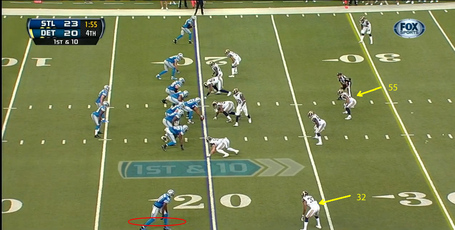 Here you see the three-man front. At the snap, Robert Quinn, on the right side, is going to get doubled up. Long is working around his man, but Stafford makes a bang-bang throw to keep clean in the pocket. James Laurinaitis is going to turn around and break downfield into coverage. That's a classic Cover-2 defense move, putting the linebacker deep into coverage. The safeties are already deep, and Bradley Fletcher, 32, is lined up across from Megatron, in the red cricle.

Fletcher mirrors Johnson, staying between him and the goalline, but lets him have a pretty wide berth.

Johnson finds the perfect hole in the coverage. This is exactly like Fisher mentioned, guys playing a little too deep. The middle linebacker and the safety probably should be back that far, at least one, because it left a pretty big donut in the middle of the field which is all a tandem like Johnson and Stafford need.

Here's a video of the play.