The Rams held their team scrimmage today at the Edward Jones Dome. This year they wanted it to be special, and did they ever pull through. Fans entered the gates at 10:00 to be able to tour the locker rooms and to step onto the field. Then of course, they watched the free practice/scrimmage. At the end, players surrounded the stands and signed countless autographs for their loyal fans.

I personally, along with many great others on Twitter, had a different experience. As "Social Media Ambassadors", we were given a private tour of the Dome and we watched the scrimmage from the field. Seriously. 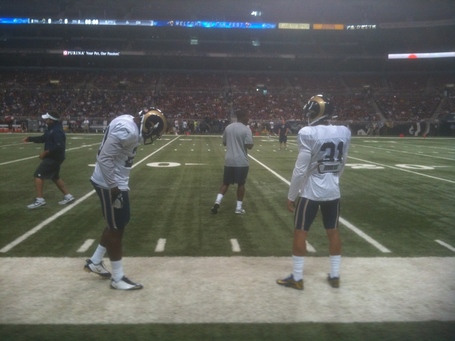 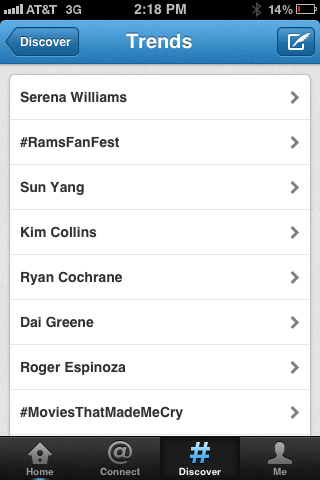 That is right. #RamsFanFest was the second most mentioned thing on Twitter nationally only behind Olympian, Serena Williams. To anybody who says the Rams do not have great fans in St. Louis....case and point.

The Rams fans are back. After a 2-14 season, the fans have had a rebirth. Over 12,000 people were in attendance today, and #RamsFanFest was trending worldwide. I have never seen the fan this pumped about the team. Rams Fans are back!

Now as for the scrimmage, there are many things that stood out.

Brandon Gibson is the best WR on the team #Rams

Like clockwork, it has happened again. Brandon Gibson is tearing up the field so far in training camp. He was phenomenal today. He was a true playmaker, but he also was last preseason. Gibby has become what many would call a pre-season star. He looks great in practice, but in games, where it actually matters, he doesn't deliver. Still, how can a team cut a guy who is doing this well? "Hey, Brandon, you're doing really well and all, but we're cutting you." Brandon Gibson, every fan's most loathed player, may just make the roster again. This time let's hope he can be half as productive in real games.

Greg Zuerlein kicks just have a different sound. He just crushes the ball. He easily has the distance and accuracy to make kicks from 60+. He will be a real weapon for the Rams late in games. The Rams have found their kicker for the future.

Sam Bradford looks better. A lot better. His velocity is back. He made great decisions. His accuracy is fantastic. The only issue was his touch on deep throws was lacking, which could be because this is the second week of practice,or maybe his ankle is holding him back some?

Based on what I saw today, the WR depth chart looks something like this...

It's possible that the top 6 on this list could be the 6 that make the squad. With Pettis being suspended for the first two games, Salas will also likely have a spot, at least to start the year. Salas worked with the third string WRs today, and except for a slant route TD, he didn't do anything to stand out. This is only week two of Training Camp, but Salas needs to step his game up.

Michael Brockers looks very good. He was constantly taking on double teams. He will be a huge help for the Rams run defense this season. He is inconsistent with pass rushing. On one play, he delivered a perfect textbook swim move to get to the backfield, but then on the next two plays, he was completely ineffective. The Rams knew he was raw as a pass rusher when they picked him 14th overall. His progression throughout the preseason will be a key for fans to watch.

If anybody is still wondering what this offense will look like, this is a running team. The Rams will run the ball heavily this year. About 60% of the plays practiced were running plays. A key for the Rams this year is to protect Sam Bradford. An effective running game, combined with smart pass calls will go a long way to help Sam. (Sidenote, strongly consider Steven Jackson in fantasy football.)

The Rams Fan Fest was an incredibly successful event. It trended world wide on Twitter and drew over 12,000 people. St. Louis is incredibly excited about the Rams. This city is ready to party like it's 1999 (horrible pun I know). All the fans need now is a winning team and with Jeff Fisher and Co. in charge, they are clearly in the right direction.