Editor's Note: I recently was allowed to guest post for Will Horton, a good friend of TST, over at his site - RamsHerd. I did two articles for him - this one, and one on Vernon Gholston. So give them a read, and a big thanks to Will for letting me promo my novel. 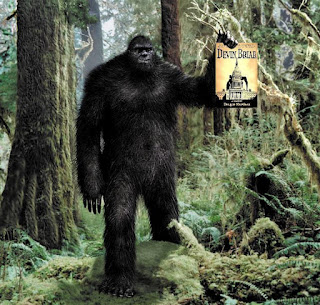 Try! I’m known for trying to do almost anything when it comes to the St. Louis Rams. In doing so, I’ve learned a great deal. For instance, Photoshop doesn’t really capture the majesty of a Rams game ticket, or at least that’s what the guys at the stadium entrance have told me on more than one occasion… Call it Kismet or Karma, I’m left with tailgating in the parking lot of the Edward Jones Dome most Sundays, though the quick chats with law enforcement before I’m politely escorted away after presenting my current ticket "masterpiece" have become kind of a ritual…

"So you actually paid a guy for this?" The nice St. Louis policeman waved the ticket I’d tried to use in my face.

"Yup! I paid a guy named Will Horton…He’s over there somewhere," I pointed vaguely off in several directions. The policeman’s rookie partner followed the wavering line of my pointing hand. "You should go find him. When I left he was selling tickets to a bus load of Nuns… Can I get a refund for my ticket?"

The veteran cop elbowed his newbie partner who was still scanning the crowd for the now infamous "Will". "You want a refund for this?" He rolled his eye, "This ticket is worse than the last time you tried this…" He pointed at a few minor glitches in the ticket’s appearance. "…For instance, most tickets have the name of the opposing team printed on them?"

I took a quick look at the ticket he held two inches in front of my face. It said, "St. Louis Rams vs. THEM. I don’t see a problem," I replied. All opposing teams are "THEM", aren’t they?

"Then there’s the ticket price," He forced himself not to smile. The stadium officials had caught this nut case at every home game for the last ten years. It had become a minor tradition at the Dome, and his picture was posted at every entrance. Over the years, even the police department had started a small betting pool on what this whack job from New Mexico would come up with next. They’d stopped arresting him a few years ago. His forged tickets were now part of a commemorative mural somewhere inside the Dome.

I studied the ticket price, which seemed fair since I’d planned on prime seating. "Yeah, who do I talk to about ticket prices? They’re getting a little steep, don’t you think?" I fixed my face with a "concerned consumer" look.

The rookie glanced at the ticket and gasped, "$11-dee jillion?" He looked at me, then wistfully at the front doors to the Dome. This earned him another elbow in the ribs from his partner.

"Yup! It’s gettin’ a little steep if you ask me… and that doesn’t include parking. But I’m a fan, so… About that refund?" I felt sweat begin to trickle down my back.

"Well, according to you, you get a lot for your eleven-dee jillion bucks. Your ticket says you’re seated in Stan Kroenke’s suite with ten cheerleaders? It also has something about calling plays?" The struggle not to laugh was made worse by the arrival of more officers. They’d heard the call go out that their fellow officer had won the pool by catching the guy who’d become known as "Ticket Dummy".

"Call me crazy," I said. I wondered why the growing numbers of officers were all nodding their heads. "But when I attend games, I want the full experience." I pointed at the ticket’s addition information on the back of the ticket. "You forgot to mention the sideline Jacuzzi and unlimited beer." I nodded with satisfaction, "Game stress management like that is worth every penny, don’t you think? Plus, the play calling thing just makes the game special, am I right?" My nodding head was on a swivel now as I searched for an ally in the group of officers. I counted twenty now, and I could see a few police cars, with their lights flashing, screaming toward my little group.

The officer tapped the ticket on his other hand as he considered what to do next. "Where are you parked? He asked, though he’d heard an officer on his chest mounted mike say, "I found it! It’s in the same spot as last year…"

Damn! They’d found my Yugo! "I’d be glad to show you gentlemen. If you’ll follow me…" He grabbed my shirt collar as I tried to make a half step dash to freedom.

He couldn’t keep the smile of his face any longer. He knew this guy was harmless enough, plus if he’d brought with him what he had in the past… "OK, let’s go. Did you bring the shredded green chili chicken or the Carne Asada this time?"

"Both, plus I have a new low calorie option for those straining against the pistol belts…" I gave his stomach a light back hand slap, then broke through the now laughing crowd of policemen as they teased their friend. I began the long walk to my car, half the St. Louis Police Department in my wake. I glance over my shoulder at the Edward Jones Dome. I could hear the announcer introducing the Rams’ players. "We need to hurry guys!" I yelled at my law enforcement entourage. "It’ll take me a few minutes to set up the TV dish." I broke into a run toward my trusty Yugo.

The rookie looked at his partner, "Isn’t the game blacked out here?"

His partner nodded, along with the rest of the officers who were all smiling now. "Why do you think we don’t arrest him every year?" The rookie shrugged. This earned him a light slap to the back of his head by the senior cop. "It’s because as bad as he is at forging a game ticket, he’s a freakin’ wizard at pirating a game signal. He has a 50" plasma screen TV in his car. Plus, the guy knows how to cook great Mexican food." All the other officers in the group started nodding their heads at the mention of food. Then one by one, they all began to sprint toward the rusty Yugo in the far corner of the Edward Jones parking lot…

I'd like to thank Will Horton for allowing me to pop in at RamsHerd. I'm assuming you all know I'm the author of - Devin Briar. It's available at Amazon in paperback and Kindle, Barnes & Noble, Apple iBookstore and iTunes, Smashword.com, and any other site where great books can be found. To all who've bought my book, know how much I appreciate your support!