Can The St. Louis Rams Defense Get the Best of Andrew Luck?

Share All sharing options for: Can The St. Louis Rams Defense Get the Best of Andrew Luck? 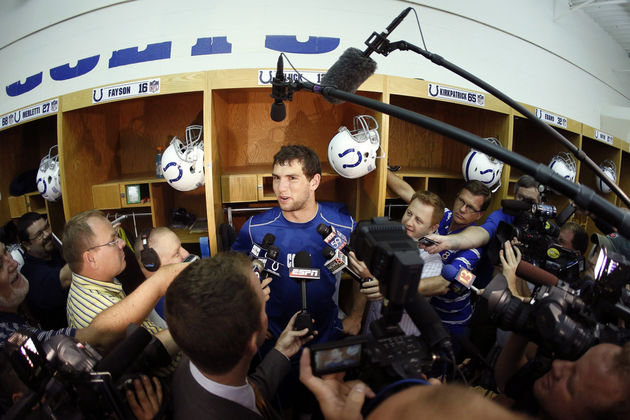 Maybe I'm just missing something, but it seems as though the focus on NFL rookies, prior to and after the draft, has been nearly devoid of mention of the #1 overall pick, Andrew Luck.

He's boring. It's not a knock on his ability, because he's clearly loaded with talent, and deservedly got the top spot in the draft. Meanwhile, second overall pick Robert Griffin III immediately found himself on late night television shows, and currently can be seen on a handful of TV commercials.

It could just be regional coverage, and I'm missing the media's fondness for Luck, but I'm doubting that's the case. Heck, the Colts may like it that way. Just as it was before the draft, the cameras are more focused on the personalities that will shine more brightly in the limelight. But that won't last long…

Soon enough (a mere nine days away), Andrew Luck will cinch the laces and get under center. His first test will be the St. Louis Rams defense. When the game is over, there will be no escaping the cameras, the microphones, and those weird little recorders that use mini cassette tapes. What kind of questions will they be asking after the game? What will they be saying about Luck?

Clearly Luck will not be playing the whole game, so even if the Rams were to 'get the best of him,' I don't think they'd be hitting the panic button in Indy. That doesn't mean that an upgraded Rams defense can't create a small wake of media frenzy…maybe about the size that a 140lb high school kid would create cannonballing into an above ground pool.

The game is in Indianapolis, so it goes without saying that rejuvenated Colts fans will be showing up to watch the future of their organization prove his worth against a previously hapless Rams defensive unit. And though opposing offenses are going to see just as many new faces on the defensive side of the ball, the Rams still have captain caliber, pro-bowl talent at every level of their defense. For some Colts fans, a matchup against the league's 2nd worse team is probably just what the doctor ordered.

I anticipate that Luck will get approximately three quarters of action in his first preseason start. I doubt, however, that he'll be facing the starting Rams defense for the duration. Obviously, preseason games are intended to help shape out the roster, and identify who can(t) cut it in the big leagues. Players like Chris Long, James Laurinaitis, and Cortland Finnegan probably aren't stressing too much about their chances of making the final 53. Neither are Michael Brockers or Janoris Jenkins, for that matter.

There are however, positions (I'm looking at you OLB) that have left a lot to be desired over seasons past, and have a lot of young talented players that are hoping to pass the test against Luck and the Colts. Whether it's the expected starters acquired in free agency, the late round draft pick, or a few undrafted guys, the Rams coaching staff (and fans) will be keeping a keen eye on the position, and anxiously anticipating results. As if optimism about the Rams defense hasn't already skyrocketed this offseason, a decent showing from the linebacker group could help (begin to) prove the legitimacy of a top-10 defense.

In summation, 11-on-1's certainly aren't fair, but that'll be a key matchup two Sundays from now. Again, no matter the results, no one should panic after the first preseason game… especially when the teams playing it had the 'privilege' of earning the 1st and 2nd spots in the draft. The Colts are hoping to witness Andrew Luck make plays, limit mistakes, and put together point-scoring drives. The Rams defense will hope to disrupt that offense, frustrate the rookie, and get off the field quickly. Depending on which unit meets their expectations will depend on what questions Andrew Luck fields after the game.

As the first overall pick in the draft, remaining 'low key' can only last for so long. What do you think they will be saying about Andrew Luck's performance next Sunday evening?