Share All sharing options for: Rams Vs. Cowboys: Game Photos

The good news is that the St. Louis Rams have just one more preseason game to play before real football starts in two weeks. Two weeks! The bad news is that they still have plenty of work to do in order to get ready, as revealed by a 20-19 loss in Dallas.

Let's go back and take a look at the game in pictures, recapping a few ups and downs and some thing Jeff Fisher and his team need to focus on in the next two weeks.

I'm not sure whether Greg Salas will make this team or not. I hope he does, but it seems like a long shot. This catch, or non-catch, was a beauty and it exemplifies the effort from the second and third team guys in the game on Saturday.

Quick got hit hard. It was perfectly legal, but it is a reminder, a symbol maybe, of how much work he has in front of him, making the jump from App State to the NFL.

Here are both of the Romo-to-Harris touchdowns. Janoris Jenkins got caught on the wrong man in the first one, on the bottom here. The safeties got burned on the second and Harris makes a nice move to plow through the defense. 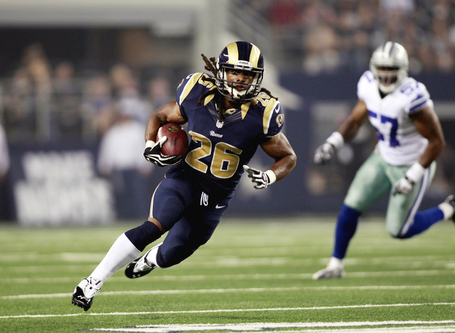 Photo via Tim Heitman of US Presswire

Daryl RIchardson just runs hard. He puts his nose down and goes where he's supposed to go, and that's why he has supplanted Isaiah Pead as the team's second running backs behind Steven Jackson. The offense was much better once Richardson got in the game.

Plenty more pictures of the game above, just click on the biggie of Bradford up there.