Breaking Down Sam Bradford Under Pressure

Share All sharing options for: Breaking Down Sam Bradford Under Pressure

Just how well Sam Bradford would handle passing under pressure has been one of the biggest questions of the offseason, the $78 million question if you will. After taking hit after hit, sack after sack and all kinds of other abuse behind a porous offensive line and a half-cocked Josh McDaniels offense, the talk of the offseason was whether or not Bradford had anything left, whether or not he could overcome the so-called "cabin fever."

There were very positive signs in Saturday's win over the Chiefs that he has indeed made progress on that front. Let's break down a couple of plays for a closer look.

This is the second offensive drive of the game, the one following Janoris Jenkins' forced fumble and Craig Dahl's recovery that stunted Kansas City's opening drive.

Saffold gets a false start on second-and-seven, pushing the Rams back to second-and-12. Bradford gets the snap, takes a three-step drop (really two and a half steps) before throwing the ball to Austin Pettis. Pettis can't quite get to the ball, which is perfectly placed, because the Chiefs' defensive back is holding onto his jersey. On that snap, Barry Richardson gets blown up by a Chiefs linebacker, just flat out run over. The defender zooms in a Bradford, who still makes the throw just in time. He did have nearly four seconds in the pocket on this throw too. Take a look: 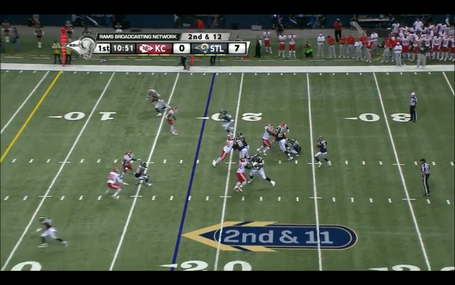 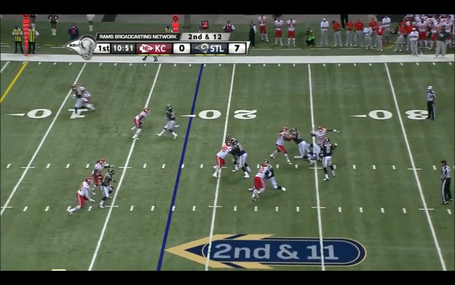 Here is the next play, third down. Bradford gets knocked down by Tamba Hali on this play, right as he makes the throw, a line drive for 10 yards to Steve Smith in the middle of the field. Quinn Ojinnaka gets spun around by Hali on this play, but Bradford, working out of the shotgun, still had a full four seconds to make the throw. 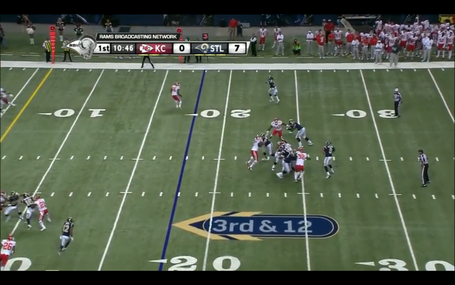 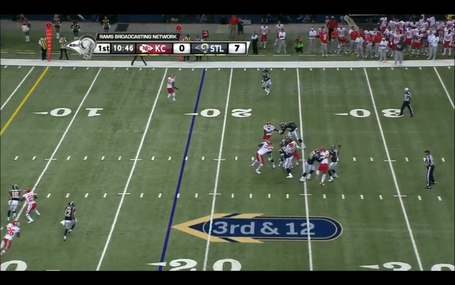 Both these plays are a positive example of Bradford working well under pressure. Granted, they are just two plays in a preseason game, but this is definite progress.

On the next play, fourth-and-2, Bradford hits Danny Amendola who makes a beautiful catch to score the touchdown, the second touchdown in two drives for the Rams first team offense. For a thorough breakdown of that play, check out this version from Arrowhead Pride.