Rams Roll Over Chiefs, 31-17, To Claim The Governor's Cup

Share All sharing options for: Rams Roll Over Chiefs, 31-17, To Claim The Governor's Cup

Talk about highs and lows, the St. Louis Rams hit both extremes in their first two preseason games. After getting blown out last week, they manhandled the Kansas City Chiefs on Saturday, winning by a final score of 31-14. Final scores do not matter much in the preseason, but there was plenty to take away from what the Rams did in this one.

Let's take a quick look back at the "things to watch" from earlier and take a quick assessment of the Rams' game.

1. Penalties - Rodger Saffold had one, but there wasn't much to fault the Rams for here.

2. Finishing - Yeah, the Rams finished pretty well on Saturday. Sam Bradford was sharp and Steven Jackson beastly on the first series of the game. They didn't even have a chance to convert a third down on that drive. Jeff Fisher pushed his starters to finish the second drive on fourth-and-two, and Bradford his Danny Amendola for a beautiful catch. The second and third team did a nice job of finishing too, converting turnovers into points. On defense, the turnovers were fantastic to see.

3. Schematics - The offense had a nice grasp of things, and the defense did much better with the basics. Did you them lined up with a three-man front, with Brockers in the middle of Robert Quinn and Chris Long. Wonder if we'll see that again? The zone could have been a little better.

4. Tackling - This was improved as well, but there were still a few misses. Quintin Mikell let one get away.

5. Fisher-ism - Oh, moustache power was in full effect. The Rams looked like a much more focus, much tougher team. In fact, they may have to dial it down some as there were a few instances where they got a little aggressive for their own good.

We'll get into the tape much closer in the days ahead. On the surface, the Rams should be very pleased with what they saw from Sam Bradford on Saturday night. His passes were sharp and accurate. He also looked good throwing down the field, and most impressive of all, he stayed upright behind a solid showing from his offensive line, standing tall with poise and command over what he was doing.

Yeah, he's still got it, and looks like he could be in for a big season.

Results were mixed for the rookie. He did score the touchdown, but his needs some adjustment time to the professional game. We saw way too much east and west movement from Pead and not enough forward momentum. There is never an excuse for a running back to get tackled for a nine-yard loss. There is no questioning the talent, but he has to translate that. Right now, Daryl Richardson might be on equal footing.

Hard not to be impressed with Givens too. I was particularly happy to see him stretch short passes into something more. Lots of potential with him.

Man, I know this is only the preseason, but it looks like this kid could be in for a huge season.

Do you remember the last time the Rams had some pop and intensity on the outside of their linebackers? Me neither, but Dunbar is giving us a taste of what that might look like. Three tackles in a game that he didn't even play in beyond the first half is notable.

Take a look at Danny Amendola's catch from the other side of it. 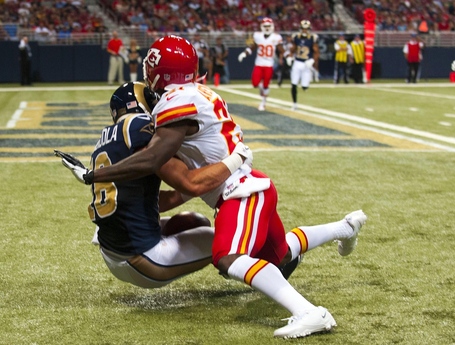 Here is the Pead run where he lost nine yards.

Check out the forced fumble from Janoris Jenkins on Jonathan Baldwin.

Be sure to check out Arrowhead Pride's recap for even more.