Share All sharing options for: Brian Schottenheimer's Most Dangerous Game

Yesterday, it was Van dropping Conrad references on Gregg Williams' perigrination through the jungles of southeast Asia. Today, it's time for the OC to step into the limelight courtesy of Richard Connell's chef d'oeuvre...well, at least in the titular sense.

No, this has nothing to do with man-hunting islanders or criminally underrated film adaptations (any film which in its synopsis includes the phrase "a homeless man whose best friend and his dog both die on the same day" is required viewing). It's more about a choice.

On the one hand, you have Shurmurism, a religion coated in the shortest of passes and the most vanilla of aerial schemes. On the other, Josh McDaniels' offense asked for deeper dropbacks and routes downfield. ESPN's John Clayton summed them up well in his first bullet point of his observations of Rams' training camp. Here they are at opposite ends of an offensive philosophy spectrum: 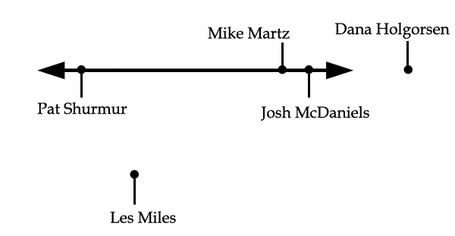 Martz and McDaniels operate in the space Shurmur has heard about, but refuses to visit: the Land of Passes Beyond 8 Yards. Dana Holgorsen is drunk in the outer space of passing philosophy. Mike Leach (not pictured) does not operate within the constraints of normal human football. And Les Miles is still a bit unsure if the forward pass is entirely legal. And I don't mean football legal, I mean society legal.

The most difficult part of OC Brian Schottenheimer's job this year? Sliding along that spectrum throughout the season to maximize the potential of the Rams' passing game while keeping Bradford upright, an issue that requires even more care with the news that Bradford could need ankle surgery after this season.

It's going to be tougher than you might think. And it's already causing a hell of a lot of confusion.

This morning, Van touched on Jim Thomas' story for the P-D talking of Chris Givens and speed. That capability, promised upon before never taken advantage of with Donnie Avery, will always be enticing to any fan. But can the Rams really take advantage of it?

As mentioned above, Sam's ankle is not 100%. That's certainly cause for concern with a position in which the most minute technical flaw due to injury can derail an entire team (I still marvel at the idea of turf toe...). It certainly won't be healing much once the season starts, especially not if he takes anywhere near the punishment he did last year behind the line.

When the Rams get around to protecting [Sam Bradford], and the receivers start proving they can get behind a defense, then we can gauge Bradford's accuracy. Sunday the Colts got in his grill two or three times when Bradford took a five-step drop to set up. That's alarming. What's going to happen on the seven-step drops?

If Schottenheimer wants to take advantage of Givens' speed, we'll soon find out. He'll have to get deeper drops to allow maximum time for Givens to get behind the defense.

My guess? It doesn't happen early on. Schottenheimer leans toward the Shurmurian end of the spectrum, taking advantage of quick burst receivers like Danny Amendola, Greg Salas and Steve Smith and leaning on the two-pronged rushing attack to buttress the passing game. It sounds like he's working on it already.

The question then is how when does Schottenheimer, along with Head Coach Jeff Fisher, decide to slide along that spectrum? Part of that question will change weekly, depending on the opponent. Not all defenses are built identically, so there will be some matchup-driven changes that could factor.

As the season goes on, if Sam stays healthy and, St. Deacon Jones willing, the Rams pilfer a couple wins before the bye, will Schottenheimer get pulled in by the tractor beam at the other end of the spectrum?