The right tackle spot was not considered much of a position battle when the St. Louis Rams opened camp, but it became one when Barry Richardson replaced Jason Smith on the right side. A battle rages there now, and based on the results of Sunday's preseason loss to the Indianapolis Colts, the oft-maligned Smith played a convincing game that should keep the depth chart battle raging.

Smith started out well once the second team got on the field at the end of the first quarter. One of the things with Smith that offensive line coach Paul Boudreau discussed earlier in training camp was learning to let the pass rushers come to him, rather than attacking and getting burned. He was doing a good job with that on Sunday.

This is a pretty good example of it. It was 1st-and-10 from the Rams 20, the play where Givens drew a pass interference penalty (which also happened to be the biggest chunk of yardage for the Rams offense on any single play). 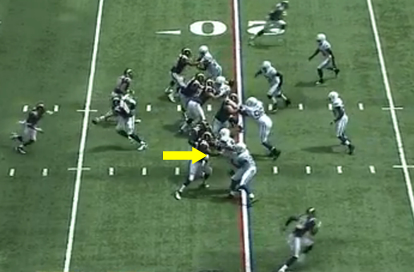 As you can see here, he bumps with two defenders after the snap. The guard finishes off one, and Smith moves back to wait for his man. 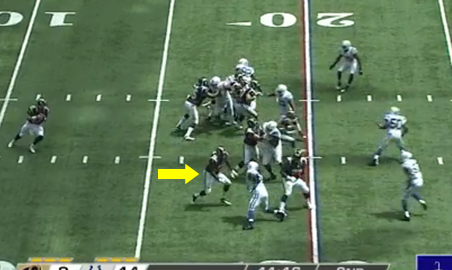 The defender comes in and Smith blocks him out of the play. It was nicely executed, and something we saw from Smith throughout the game, at least until a sack on 3rd-and-nine on that same drive.

Clemens, as you can see, is getting the shotgun snap. That's Jerry Hughes lined up on Smith's outside shoulder. If I had the tech savvy to pull the video, you would see that Hughes jumps and probably should have drawn an offsides flag.

Here they are lined up right as the ball is snapped. It doesn't look as though Smith is eyeing Hughes, who at this point has taken his step. 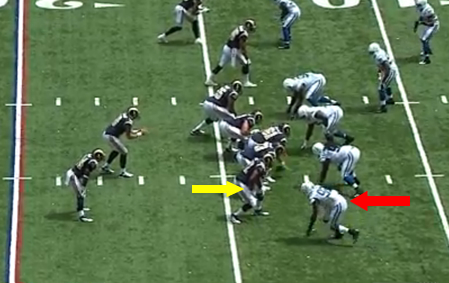 Smith is on him here, but the angle is off. Hughes is chugging straight ahead. Smith's eyes are on him as if he's a step or two behind where he is at that point. 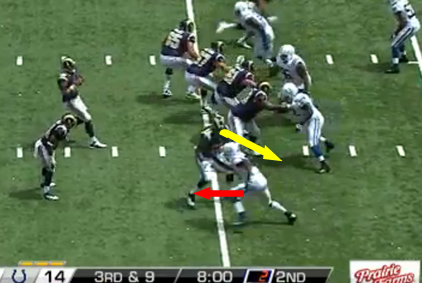 From there, it's too late. Hughes is past him. Smith is beat. Clemens is sacked. The drive ends with a field goal. 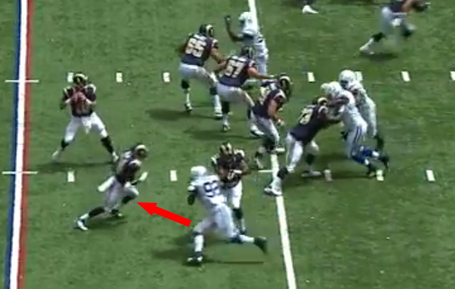 Smith had done so well up until that point. Unfortunately, all it takes is one missed block and a resulting sack to kill a drive, especially on third down.

He still had a better game than Barry Richardson. On the first drive, the starting right tackle allowed two pressures, including on the failed attempt at a fourth down conversion on the first drive. On Pead's first carry, the first play of the second drive, Richardson's man beat him to make the block.

The right tackle battle will continue throughout camp. Had Smith not made that one huge mistake, I'd say give the job back to him, but he needs to assure coaches that he can play like he did for most of his first two drives, which was much improved, without giving up the big hit like he did.