As we move yet another day closer to the first snap of the preseason for the St. Louis Rams, talk of roster battles and 'bubble watch' highlight both players and positions in a critical light. Sunday's game against the Indianapolis Colts will give fans the first opportunity to see a quick glimpse of players who are a lock to make the final 53, but more importantly, provide plenty of time to play arm chair GM.

One position, as you may have guessed, that will be watched with a keen eye will be Wide Receiver. The Rams currently have eight receivers that will be hoping to impress this weekend, as it's very unlikely that there will be eight spots to be had as the final roster shakes out. There's plenty to look for, as well. Whether it's strength to return from injury, ability to answer questions of doubt, or skill to prove you were worth the draft pick, it's fair to say that when the ball is thrown to a Rams WR, there's an expectation while the ball is in the air.

Let's take a glance at WR pairings. Who has the most to prove? Who are you most interested to see in the Rams first preseason game?

Reliable/Returning from Injury: Danny Amendola and Steve Smith. In 2010, Danny became Sam Bradford's most reliable target…actually, he was pretty much Sam's only target. I'll spare you the picture, but we know that Danny missed all of last season with an elbow injury. It's clear to see, amongst other things (cough…coaching), that Danny's absence in 2011 seriously hindered the Rams ability to move the ball through the air.

Steve Smith has been unable to stay 100% over the past two seasons, and was nearly non-existent in the Eagles aerial attack last year. In case you weren't aware, though, when Steve Smith is healthy, he is as legitimate a weapon as they come. In 2009, while with the Giants, he surpassed 100 catches, and amassed 1,220 yards receiving. He now feels good. He feels motivated. He's 100%.

Does their ability to come back healthy take priority on Sunday's watch list?

The 2nd Year Guys: Greg Salas and Austin Pettis. Certainly a couple of young guys to keep your eyes on, as they've drawn mixed reviews from both fans and media. Salas made it only nine games into the season before breaking a bone in his leg, which sidelined him for the remainder of 2011. He was beginning to form a nice rapport with Sam, and had 7 catches in the game against the Cardinals…prior to this. Well known for having reliable hands, something the Rams could use desperately, Salas is also popular for his physical nature. Send him over the middle…he doesn't care

A little less adorned, and most likely due to his four game suspension - as a result of using performance enhancing drugs - is Austin PEDdis…or it is Pettis? At any rate, Pettis is far less popular than his 2011 draft counterpart. Pettis had a tremendous senior season at Boise State, and impressed at the combine. Unfortunately, neither were shown consistently on an NFL field last season. He had 27 catches for 256 yards in 2011, and laid a goose egg in the TD column. Spagnuolo and Co. did find use for him in the return game though.

What do these 2nd year guys need to prove to you? Clearly there's talent. Blame it on the coaching? Is Pettis' suspension that syringe that broke the camels back?

The 'Ugh'-ly Boys: Danario Alexander and Brandon Gibson. Where to begin…I don't talk enough about DX, so I'll start there. I'm not sure when enough is enough, but ultimately he's been given an opportunity to prove to his new coaching staff (and teammates) that he can stay healthy and be a real contributor on this team. No one doubts that he has/had blazing speed, and you cannot teach size. The issue is whether or not he'll be able to use either. And if he is, for how long? Surgery, after surgery, after surgery, after surgery, after surgery will take a toll on a receiver, ya know? And now, the hamstring. 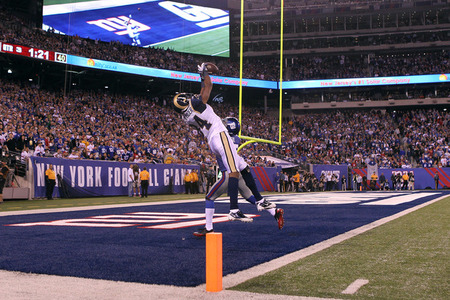 And on August 9, 65% said to let him walk…er…however he gets around

Gibson is another story. If there were a Hall of Fame for preseason players, Brandon Gibson would have had his bust enshrined two years ago. The problem, as we've all witnessed, is that his earning a spot on the roster due to his preseason excellence, isn't translating into production during the regular season. Gibson has yet to start, or play in, all 16 games of a regular season in his still young three year NFL career. In 39 regular season games, he still doesn't know what it's like to hold a ball in the end zone. He sometimes doesn't know how to hold a ball in general.

The Future: Brian Quick and Chris Givens. Let's face it, what we want to see from these two is everything that's been advertised. These two need to scorch defensive backs, and even more importantly hold onto the ball. Quick and Givens have received rave reviews from coaches and media. Somewhat surprisingly, and oh-so-pleasantly, is the emergence of Givens name and the potential he has in this offense. Jeff Fisher and Les Snead appear to have nailed it in the draft. Sunday will be the opportunity to prove that they've got what it takes.