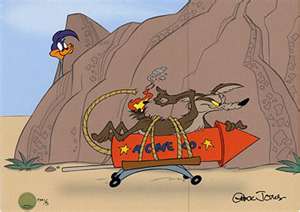 
Makeshift sparkly bombs will be o' burst'n in air tonight. Barbecues will be churning out 4th of July fare, and kids will be sneaking peeks at the family fireworks cache as dusk edges closer.

Here in New Mexico, we have a rather liberal view of what "legal" fireworks are, and at some point tonight stadium rated pyrotechnics will be launch from the backyards of some very small houses. You see, it's kind of a competition among we high desert dwellers to find the biggest, baddest, color filled missile we can find during the year, and hide it away until tonight.

I decided to build my own "contest" offering for tonight's fireworks blitz. I studied long and hard to come up with the right design. My friend's wondered what I was doing last week. I locked myself in my workshop, and wouldn't answer their pleases to let them inside. I'm not sure why, but most of my neighbors have left the area. I heard a few of them talking about upping their homeowners insurance coverage? Hmm... It's like they think my 8 foot rocket won't clear their houses...

Anyway, I'll let you know how it goes. The crowd building a few hundred yards away from my home is an interesting mix. I can see my friend Titus Fielding sitting atop one of his fire engines. His firemen have a barbecue set up, and for some reason the guys in FBI windbreakers keep refusing offers of hot-dogs and burgers. I can also see my friend Bob Lousy talking to his volunteer bomb squad. I love the uniforms he chose for his crack explosive ordinance team - Hawaiian shirts, shorts, cowboy boots and straw hats. Bob always loved M.A.S.H.'s Hawkeye Pierce. Monica Gibson, our town's mayor, appears to be talking to a few rather excitable people from ATF. Her kids, who've been sneaking me pizzas, drinks - and a few hot-dogs in the last hour - said their mom wants me to wait until Colonel Bate and his men get here from the near by Air Force base.

The Colonel and I have a bet. He says he can shoot down my rocket with some of his new fangled ground to air missiles. What he doesn't know is my rocket is all kinds of stealthy. I wrapped the outside of my missile with un-cooked pizza dough from Pepe's Pizza Parlor. That stuff could block out gamma rays, let alone radar.

Right now, I need to find my old football helmet and my Ray-Bans. Safety first is my moto. So wish me luck, and while I'm going through the pre-launch count down, talk amongst yourselves about your 4th of July, Fantasy Football, and of course - The Rams!