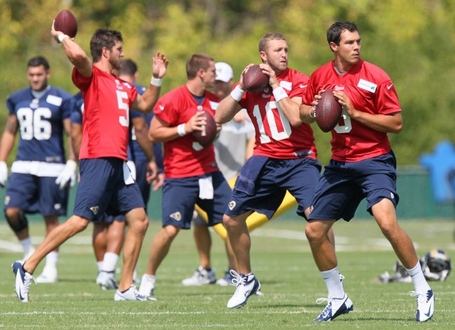 Yes, being on tippy-toes is a good sign for #8

Welcome back to football! It seems like it's been forever and a day, but it seems like the sun is shining a little brighter with the return of pigskin competition. Well, a little TOO bright in STL where temps have soared in the 100's recently, but I digress.

The purpose of this post is to address what I am sure is on the minds of both Rams fans and Charter VP's alike: the return to health of one Sam Bradford. It has been only two days, but I am confident in what I am about to put on "paper": the man is back and ready to go.

I'm not one for hyperbole, but three things immediately stood out to me the last two days:

1) Passes are not only crisp, but have great acceleration out of his hand, tight spin and velocity all the way to the receiver. He has not unloaded many deep passes yet in 7-on-7 or 11-on-11 (possibly today & Friday), but his short/intermediate passes are strikes, usually on the numbers with an audible "whump". One pass in particular whip-lashed Brandon Gibson's hands behind his head, while another was too much for Danny Amendola to pull in. Sam did throw a few picks in practice, but nothing to worry about as on one his receiver allowed the CB to get position on him, and on another Darian Stewart made a tremendous play on the ball.

2) Pocket mobility has returned, with Sam showing no tentativeness in his motions. Most of his snaps are from under center so far, and his drop back is aggressive and his plant is firm. At one point he was flushed from the pocket, scrambled to his left (eyes downfield), and ultimately tucked and ran out of bounds. His pocket awareness seems to be decent, with not a lot of signs of "happy feet", even though the Oline is being pushed back consistently by Dline. I expect this to even out a bit more as pads come on and the linemen can anchor, as Coach Fisher pointed out to Jim Thomas.

3) It is clear that Sam has spent much time working with his receivers, as the timing of his passes is quite good for the third day of training camp. His awareness of where his checkdowns are is noticeable, an area of improvement for him. Specifically, Steven Jackson and Isaiah Pead were safety valves, with Lance Kendricks also seeing some zone looks.

Now, for the negatives. Thankfully, there are not many so far:

1) One thing that has happened the last two days that Rams fans do not want to hear is batted balls. He is still working on this issue. We now have TALL DT's in Kendall Langford and Michael Brockers (6'6 and 6'5, respectively), but still Sam needs to find better passing lanes. This will be something to keep an eye on.

2) Sam appears to be doing a better job with not locking on a primary receiver. However, there were a few times were CB's read his eyes and made a play, specifically Janoris Jenkins on an almost pick.

However, I'm not worried about the above things until the pads come on and we have a better idea of pass pro. I spoke with Mike Sando (@espn_nfcwest) after practice, and he came away very impressed with Bradford's arm power, accuracy and mobility. Mike touched on it in this article. He sees a totally different player from the second half of last year. We will see!