Share All sharing options for: WWE Monday Night Raw: Jeff Fisher Takes In Some Wrestling, Pictures To Prove It

St. Louis Rams head coach Jeff Fisher was making the rounds this week ahead of WWE Wrestling's Monday Night Raw event. The venerable television program featuring men in tights, grabbing each other in awkward positions hits its 1,000th episode milestone right here in St. Louis. And who was on the scene in anticipation? None other than Fisher himself.

After the jump, it's Rams head coach Jeff Fisher with noted wrestling enthusiast John Cena, who is paying tribute to Fisher in the most appropriate way possible. Check it out after the jump. 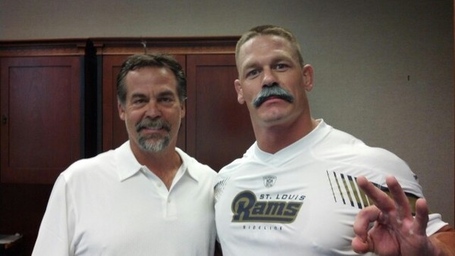 So there it is. John Cena in a Jeff Fisher mustache.

Personally, I think we should all get Fisher mustaches and wear them to camp this season for one of the open practices.

Speaking of, don't forget we'll be having the TST meetup on August 7 following the Rams 3:30 p.m. practice that day. Mark your calendars now to be there.