NFL Football: How I Met Two of NFL's Stars

Share All sharing options for: NFL Football: How I Met Two of NFL's Stars 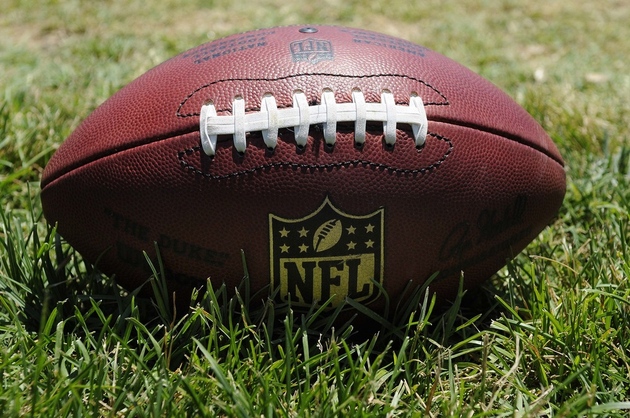 My younger brother came to visit me yesterday. He just turned 22 years old, and I felt it necessary to celebrate the anniversary of his ability to legally drink adult beverages. We wound up just a mile or so away from my home at Glory Days Bar and Grill. If you haven't heard of it, or don't have one in your area, it's a sports bar where pretty much every square inch of wall is covered with a flat screen TV. One of the niftier features of the joint is that each table comes with it's own speaker, which you can turn to the program of your choice and listen in.

While watching nothing in particular, we discussed what we were inevitably going to be eating without even opening the menu - chicken wings. Beverage? Adult! While we waited for our waiter to bring us tall Sam Adams Seasonal's ($4 during happy hour), we glanced around at the cornucopia of TV's and discussed the bevy of sports news for the day. Little did I know the odd way in which some of the day's news would affect me…

While my younger bro and I swiftly swilled down the perfectly chilled American wheat ale, we caught up on some of the goings on in his life. We of course discussed football, and I flexed what little bit of Rams knowledge I had on him. Before he passed out from boredom, I quickly changed the subject. At one point, I think I saw him reaching for his a keys when I was giving my opinion on who should start at left guard this season. Luckily the food arrived in time to spare him…

I wanted my wings to be as hot as possible, and I asked for them to cover them in jalapenos before they came out. They fulfilled my request, but the wings just weren't quite as warm as I'd prefer. If you're not going to 'feel the burn' the next day, then they're not hot enough, ya know? At any rate, when the waiter stopped to inquire about my nearly empty beverage, I asked for hot sauce. "Tabasco, ok?" Not really. It was going to have to suffice, though.

About 10 minutes later, and growing increasingly impatient, I do my best giraffe impression and start looking over the wall beside me - swiveling my head in a 360 degree manner, which made it look like my head was too heavy for my neck. I looked back at my brother and said, "Where is the damn waiter with the hot sauce?" I glanced down at the text he was sending, only to see 'GET ME OUTTA HE…' Before I could inquire about the nature of his text, someone at the table behind me uttered something I could barely hear, but was loud enough to catch my attention. I peak around the backside of my booth, and who was there? None other than Dez Bryant. "Try some of my favorite hot sauce," he says.

I gladly took his bottle of Slap Ya Mama, and doused my wings until there was almost none left. I then turned and motioned that I would toss the bottle back to him. He put his chicken wing eating gloves up in front of his face, and go figure, the bottle bounced right off of his forehead, and landed in his raspberry margarita. A lending hand, yes. I set of reliable ones, not so much.

Belly full of both fiery hot wings and somewhere in the ballpark of 96 ounces of beer, I (being a good big brother) paid for our food and beverages, and we headed for the car. As we neared the car, I started to think that maybe getting behind the wheel might not be the wisest decision. We came to the agreement that rock-paper-scissors was the only sensible way to decide whether or not we'd drive or utilize the services of a nearby cab company. Paper beats rock…Cab it is.

The great thing about the area I live in is that cabs are plentiful, and 90% of the population is, or is about to be, drunk. I whipped out my iPhone, went to my Taxi Magic app, and got confirmation that our ride was on the way. During the interim, I tried to re-challenge 'paper' (my brother), as I felt he threw his after the three count, not on three. Bingo! My rock crushed his scissors! As I shuffle through what appeared to be a jailers amount of keys looking for the one to unlock the door, I hear an extremely loud honk behind me. It's the cab…look who's driving!
If it isn't Robert Quinn! Having just seen the news about Quinn inside the bar, I said 'Nah, we'll just catch the next one.'

"You two look like you've been drinking. Hop in!" I looked at my little brother, and we both knew what we had to do. Rock crushes scissors. As we kick aside large glass bottles conveniently wrapped in brown paper bags which were rolling around on the floor, we cinched our seat belts in for what could be the most dangerous one-mile ride of our lives. Turns out he was a pretty good driver. He turned on his signals in time, and was even kind enough to ask us what radio station we wanted to listen to.

As he came to a stop at my home, we both thanked Robert for the ride, swiped my card in the headrest signature capture, and proceeded to get out of the vehicle. "Whoa, whoa, whoa," he says. "Where's my tip?"

"I've got one for ya buddy," I replied. "Download the Taxi Magic app!" He just growled something about "caring" before he sped off toward the freeway on-ramp...