St. Louis Rams Wide Receivers: How Many are YOU Keeping?

Share All sharing options for: St. Louis Rams Wide Receivers: How Many are YOU Keeping? 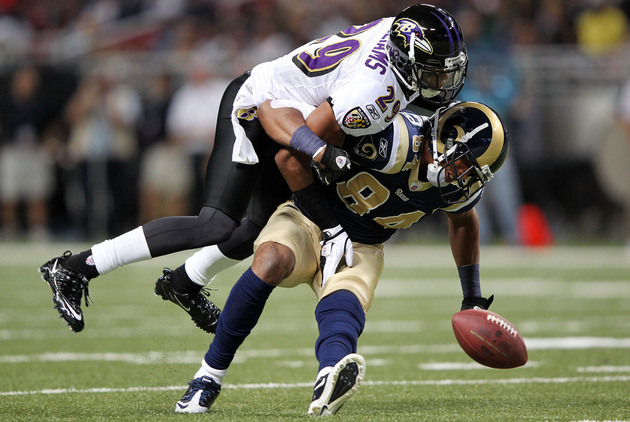 As we inch closer and closer towards the start of the NFL season, we'll witness the roster size diminish, as players hopes to make an NFL roster (at least in St. Louis) will dwindle away. It goes without saying, injuries and downright poor execution from the wide receiver bunch over the past several years has left fans yearning for a group who use their physical attributes to get open and hold onto the ball. 2012 seems as good a year as any for some renewed optimism. Better coaching is certainly a starting point.

It seems to be consistent that each year the wide receiver bunch will look different, and this year is no exception. With the exodus of Brandon Lloyd, the Rams used free agency to fill that void by signing Steve Smith. Aside from that, the draft brought in the likes of some promising young help in Brian Quick and Chris Givens, who could both make an immediate impact for the Rams.

The remainder of 'depth' is a mixed batch of the oft-injured, a couple of second year guys with no real guarantees, and a few who, quite frankly, have worn out their welcome. Let's take a look at the list of currently on the roster. Who, and how many, are you going to keep?

If I were going to make some Mel Kiper Jr. type prognostications, I'll tell you that one thing is certain….Quick and Givens will be on the opening day roster. Not enough? Tough crowd! Well, in all honesty, I've got my personal list of guys I'd like to see return, and I've made it public the ones that I'd like to see take the handi-ramp onto the next flight out of town.
As you can see, there are 10 guys currently hoping to make the team. INCOMING MEL KIPER JR. PROGNOSTICATION #2: Not all of them will make the team.
So let's hear it. How MANY of these guys do you hope make the team? There are certainly still free agents like Plaxico Burress and Braylon Edwards still out there. If you're looking for one of them to make the roster, someone else has to go. Chop this list from 10….how many are YOU keeping?