Ever found yourself in a win-win situation? As scheduled, I’m privileged enough to provide you with this weeks Thursday edition of Random Ramsdom, and it couldn’t have fallen on a better day.....Happy Daniel Boone Day, everyone! A native of the Bluegrass State, it brings me great pleasure to announce the celebration of one of our countries greatest holidays!

Daniel Boone was a pioneer and a frontiersman, whose exploration brought about the settlement of current day Kentucky, and comfy nesting spot of Coach Cal’s first National Championship trophy. Irrelevant to you? I think not! Boone spent the last two decades of his life in Defiance, Missouri. Though I’m sure he was a Rams fan, there is little foam-finger evidence to support my claims.

Having TST credentials, I tried to get in touch with Mr. Boone’s agent to conduct an interview. He was unavailable because....well....he’s almost 300 years old. Knowing that he had been temporarily captured by Shawnee Indians during the Revolutionary War, I contacted the only person I knew who could help answer a few questions for the TST faithful....Sam Bradford!

"Tell me a little bit about the Shawnee capturing of Daniel Boone, only to ‘intercepted’ by Kentucky" I asked. ‘Uhh....I’d like the Country Fried Steak and Eggs Combo,’ he muttered. Remembering that I’d introduced myself as Donnie Brasco, local branch owner of IHOP , I hesitated for a moment and requested that he let me check the kitchen to ensure we had enough ‘country fried’ sauce. While he waited patiently, I got preoccupied by some pertinent Rams news...

Take a look at the list of wide receivers currently hoping to make the Rams final roster. Surprised by this order?

In an interview with the NFL Network, Finnegan states that re-joining Fisher was the single most important factor playing into his decision to come to St. Louis. No surprise there. He say's we're 'remodeling,' though, and ready to put it together now.

Yup....it's about one of the Ram's draft choices. Take a guess before you click....were you right?

Taking A Look At Some REASONABLE Expectations For 2012

The new-look Rams certainly have high hopes for the upcoming season, but where does optimism meet reality? Bleacher report gives their take on both offensive and defensive production, and five reasonable expectations for 2012.

To whack or not to whack? That is the question. Either way, Mike Silver (Yahoo! Sports) says that Gregg Williams paid Jo Lonn Dunbar $200 per 'whack'

..."I’m sorry Mr. Bradford, are you still there?" In the background I could hear Danny Amendola discussing whether or not to bring ‘Bakon Vodka’ along for the Bloody Mary’s. "Still here, Donnie! If you weren’t able to find the ‘country fried sauce’ it’s ok...I’ve decided I want the ‘Take Two Combo.’ Without hesitation, I said ‘Quick and Givens, eh?’ After a moment’s pause, he says ‘Wait.....who is this?’ I panicked! In a girly falsetto voice I mumble, as if to be in the background, ‘found the country sauce!’ Shew...close call! While he turned to question Danny about the relevancy of the call, Danny inquired about his non-invitation to Natty Beerfest 2012. As breakfast lovers quarrelled, I continued to surf...

Devils Able To Hold On To Force Game 5
On the verge of being swept and finishing out the NHL season, the New Jersey Devils were able to hold on with a 3-1 victory in LA, forcing a game 5. The Devils will head back home, facing a serious uphill battle, and once again facing elimination
Too Much Thunder For The Spurs To Weather The Storm
The Oklahoma City Thunder knocked off the top-seed Spurs at home, 107-99. They'll await the winner of the Miami vs. Boston series. Lebron and Co. will take their talents to Boston on Thursday night, where they'll fight to keep their season alive under many, many, green championship banners.
Shurmur Confident He's Got The Personnel At WR
Finishing 24th in the NFL in passing yards in 2011, the Browns offense was almost as abysmal as the Rams. With many questions in their wide receiver corps, and waiting until the 4th round of the draft to address the position, Pat Shurmur shows little concern for his ability to dink and dunk his way past opponents
Confident In Your Manhood? It's OK...They Are Handsome
Like hockey? Likes 1970's mustaches? Enough said...
Don't Draft Julio Jones In Your Fantasy Football League
....he cut off his awesomeness. It's a proven fact that hair coming out of helmets makes you a spectacular football player. Ask Steven Jackson and Troy Polamalu!

"Alright sir, I’ve got a table booked for two for 9 am this morning. That’ll be one Take Two Combo and one Chicken Florentine Crepe with Bloody Mary. Is that correct?" In the sheer excitement of thinking he’d won the most recent ‘IHOP’s for the Hungry’ raffle, he and Amendola jumped into Sam’s Honda Del Sol and were headed downtown....or wherever it’s located. The joke was on them, though! Having gotten my interview, knowing that there was no 9am appointment for the hungry couple, and having reworked his contract, they were only a rock-paper-scissors away from who was doing some dishes to pay for their meals. And three centuries later, Daniel Boone had gotten his revenge on the Shawnee! Don't mess with Kentucky! Whats that? Sam Bradford is Cherokee? Son of a...

This One 'Wreaks' Of KnoxFan

Dude, where's my tractor? My guess is that one of TST's own could sniff this one out...

This 26 year old fox comes to pick you up for your first date, and you notice her license plates. Could be an animal rights activist, could be pure animal. Only the plates will tell!

In case you haven't heard, the great state of New York is trying to prohibit the sale of large 'soda pop,' in order to make the world better, one fatty at a time. This link'll show ya why...

Miami's apparently not only a destination for America's geriatric, it's also a popular vacation spot for the living dead. You go, Miami! Not to be outdone, this Louisiana man, took a bit out of life!

DC's Ran-Dumb Quote of the Week
"Nobody in the game of football should be called a genius. A genius is somebody like Norman Einstein." - Joe Theismann, Former quarterback.
DC's Ran-Dumb Tweet of the Week 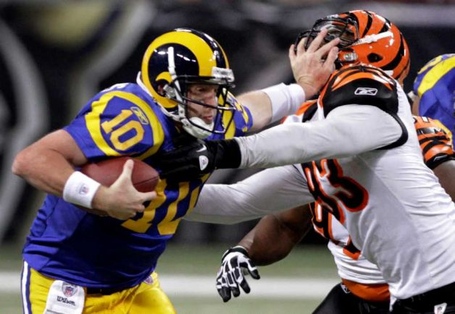