Good morning, Rams Fans! Welcome to another Thursday addition of Random Ramsdom, hosted by yours truly. At TST, it's not often that one is asked to listen, as it is indeed "Your best source for quality St. Louis Rams news, rumors, analysis, stats and scores from the fan perspective"…in print. But today, I'll ask that you look and listen, for it's 'Lend Me an Ear Day!'

This 'holiday' derived from a hungry boxer you may know, who just so happens to have enjoyed a 3rd round snack in the middle of a heavyweight title fight. Though the term 'lend' is still up for discussion, a $3 million treat certainly deserves to be recognized annually, does it not?

Marc Antony, recently divorced from J-Lo, asked Friends, Romans, Countrymen, to lend him one. If you want to listen to something on this post, lend your ears to the Beatles, and they'll sing you a song…

Otherwise, lend me your eyes while you chug down that morning cup-o-joe!

In Rams News…
A Way-Too-Early Prediction of 2012's All-Pro's
This link will take you directly to the one Ram who made the list….any guesses?

In Case You Missed It…

New Era released their NFL On-Field "59fifty" hat line hats earlier this week. It'll be another couple of weeks before they're available for purchase. Can someone please tell me how to wear a flat brimmed hat without lookin like a doofus…that's right, doofus! What do you think of the new head dress?


Culture Change the Most Important Key to Rams Success in 2012

'Duh!' right? It's a Rams' fans hope, at this point, that we've come a long way from the days of the shoddy four pillars. GM Les Snead and Head Coach Jeff Fisher now get to set the tone for the Rams of the future. The team certainly looks different. Let's see them play different?

"You have to be a professional in everything you do, and it has to be right now, you have to learn it right away," Quick said. "You definitely have to become a professional first and foremost." I'm loving this guy more and more every day. He wasn't the only one on hand for 'rookie week,' to assist in rebuilding a home in Joplin, MO. The amount of payroll needed to hold up one wall is astonishing...

There are a lot of questions surrounding a team that has been in the cellar of the NFC West for the majority of the last 5 seasons. It's got to be hard to pinpoint one, and even when you click this link you may disagree. Then again, a certain St. Louis Ram needs to step up if there's any chance for success in 2012

Here's a few mocks you can take a look at if your team is picking as low as mine is. John Wall needs another player from Kentucky, if you're asking me.
And since you're not asking me, let's see what the 'experts' think.
CBSSports,
ESPN Insider,
Walter Football,
HoopsHype,
NBADraft.Net.
Tune in tonight at 7pm EST
Say oops upside ya head, say oops upside ya head!
You say you like seeing people get hit in the face at sporting events? Ditto! Take a gander at some of these knee slappers. Even the best of people, with the cleanest of conscious will have to at least chuckle
Left Tackle is gradually becoming a less valued position?

Jason Cole at Yahoo! Sports seems to think so. It's a very interesting read. He gives statistics on the elite teams, and their not-so-elite left tackles, as well as highlights how first round LT's don't equate to Super Bowl appearances….at least not in the last decade. Also, for those who think we missed out on Kalil, Cole say's he'll be 'good,' but you won't be talking about him 'like Pace.'
Marco…….Polo. Marco……..Polo
A lot of time and money goes into engineering swimwear that'll make humans as fast as otters, seals, etc. Ya know...all of those clubbable animals. Well Michael Phelps is taking a much cheaper, must more attractive approach to olympic caliber speed.
Know where you stand on Mark Cuban

Often in the spotlight is Mark Cuban. The not-so-shy owner of the Dallas Mavericks recently visited the set of ESPN's first take, with Skip Bayless and Stephen A. Smith. It's a montage of Cuban letting him know how he feels about them. I honestly was indifferent before this video, and I almost love the Mavericks after having seen it
F-bombs a plenty 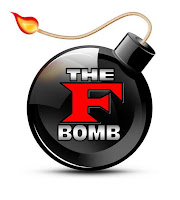 If you're at work, you may want to turn the volume up….I mean down. Either way, there's no better way to start the day than with 40 professional athletes with filthy mouths. A few things to note: Kobe is hilarious, and Sidney Crosby is a bitc….bit upset inside the Verizon Center, where fans who Rock the Red are loving it! Will you hear about what isn't 'F'n holding'?
Worst Haircuts in all of Soccer
Please don't let the word 'soccer' deter your from taking a gander….these "do's" are spectacular. Not sure why they're hating on Valderamma. #3 is my personal favorite, and #6 is pretty, if only she'd smile
What ELSE is going on in the world…
What do you think about these kicks?
Think fast! Initial thought! You'll know pretty quickly if you're a racist or not. I saw an ugly pair of shoes…thats what I saw. What you should be more worried about is whether or not the shoe fits...
Your car might as well be a bullseye

Whether you're scratching your head wondering 'why me?!?!' or just ready to head to the dealership to pick out your brand new ride, you'll want to give this a read.
Enter at your own risk though, because the pigeons will know that you've read, and they will make you pay…for another car wash
One question: How did that bird get a copy of Doug's book?
Shot to the heart, and you're to blame, darlin you give Mustaches a bad name
Tarnishing the good name of mustache owners, both inside and out of St. Louis, is the 'Mustache Bandit.' He's been robbing small sandwich shops and electronics stores for the past 3 months. No, he's not stealing sandwiches, though I can't say I'd blame him if he took one while he was there. It's tough work being a robber, and maintaining a mustache...

It's the second coming……of the second coming. This Waco Texan has an appetite for K9 destruction! Has anyone called Adam Richman? This is definitely a Man vs Food challenge that no one would like to see finished. If you're not catching my drift….zombie

Thanks Journey, but actually, that is not entirely correct. I was a small town boy, born and raised in south and central NC. There was a train track right across the road from the first house I lived in. But since I was a young-un, I didn't take it much - specially at midnight. I likes me some trains tho.

So why the hell did I become an LA Rams fan? This was the mid-60's, so no Carolina Panthers. I guess I was supposed to like either the Deadskins or the Falcons based on what was on TV most of the time. The Deadskins were boring, and the Falcons were brand new - no thanks. The only entertaining thing about the Skins were the Hogettes, but they didn't come along until the early 80's.

Why the Rams you ask (if you even give two sh!ts)? Well, there was this quarterback name-a Roman Gabriel. He was from North Carolina too. Not only that, he was born in the same city as me -Wilmington. He went to the same High School as my mother (years later) and starred in football at the college - NC State - that my father went to. So it seemed meant to be.

Surprisingly, it was possible to see them even though they were all the way across the country. (There were only about 15 NFL and 8 AFL teams then.) When I got to see Roman play, there was this other guy that really made it interesting - WR Jack Snow. That guy could catch anything - anywhere. The two of them made magic.

So that's what got me started with the Rams. What made me stay thru the many years is the characters and outstanding talent who came and went. (If we could have had the best of the offense and defense at the same time - trophies baby!) Always seemed to have a lightning fast receiver and, of course - the Fearsome Foursome on D. One of the characters and guys with outstanding talent that you should know about (if you don't already) is Jack "Hacksaw" Reynolds. I had forgotten the particulars about how he got his name. The best way to have learned is to hear "Dandy" Don Meredith tell the story on Monday Night Football. But since that is no longer possible. Here's a link

This is the kind of attitude we need on the team, and I hope Mr. Fisher brangs it! "DON'T STOP BELIEVIN!"

The AT&T National begins today at Congressional Country Club in Bethesda, MD. I was fortunate enough to see the U.S. Open at this beautiful course last year, but will not be able to make it out today to see Tiger host his own Tournament. In a sit down that I didn't have with Tiger, I told him to enjoy D.C. and all of it's 'amenities.' The night life is great, Tiger. Go enjoy someone it, so that your game doesn't suffer this weekend.
Happy Birthday!

This Day In Sports History

Enjoy your cruise to weeks end! Go Rams! Again, a special thanks to ramdude for providing a great story for this post. As a note to all of TST, hit me up on the email, and I'd be more than happy to include your story, or anything hilarious in my post! ...