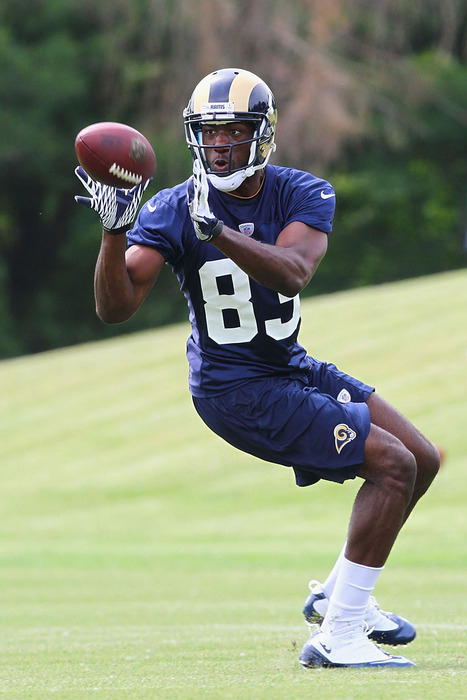 Just a word of advice, but I wouldn't recommend it. In what appears to be my continuous effort to upset Rams fans, I would strongly suggest that you do NOT draft Brian Quick. Many of you will inevitably disregard every single word of what I've written thus far, and I cannot say that I blame you. Your optimism is inspiring. Your ability to win a fantasy football league, however, is questionable.

Brian Quick, recent graduate of Appalachian State - and more recently a 2nd round draft pick by the St. Louis Rams - has shown he has the attributes necessary to be successful in the NFL. To some's surprise, the Rams selected Quick with the first pick in the 2nd round of this most recent draft, passing on some 'more popular' WR's still available. He was later described by Rams staff as '1b,' right behind Justin Blackmon.

Rams fans and media seem to see the potential in Brian Quick's ability to adapt to life in the NFL. He's not receiving a whole lotta love in the fantasy realm, however…

Using the Yahoo! Fantasy Football draft setup (that many of you currently find yourselves involved), you will be drafting a team of 15 players (QB, WR, WR, WR, RB, RB, TE, D/ST, K, BN, BN, BN, BN, BN, BN). Honestly, if you're not taking Quick as one of the 'BN' players, then you should be glad this isn't a league that involves you inevitably forking over money.

There are of course FF 'experts' to guide you along with their mocks, draft kits, and player rankings. Though these may be a good guide for how you initially rank your players, it's shouldn't be set in stone. These 'experts' are about as good as predicting FF performances as 'The Hair' is prognosticating the draft. At any rate, they are there, and we should take a look at how they've positioned the probable '#1' for the Rams.

Feel free to stop scrounging for your calculator…I'll help you with the math. 10 team leagues, 15 players each…..we're looking at the 150 top players to be selected in the draft. Maybe you'll like what you see here, because you intend on drafting him regardless of what I suggest, or these experts project. I suppose it's still worth peeking at, though.

ESPN's 'The Talented Mr. Roto,' Matthew Berry has Quick ranked as the 174th player (WR 64). Same site, different expert, Christopher Harris has him ranked 164 (WR 54). Yahoo! has Quick ranked at 156…..you'll notice he's ahead of both Danny Amendola and Sam Bradford. Something to note: While ESPN has them ranked through the 16th round (including kickers from 151-160, as their leagues are 16 players), Yahoo! does not. So even though their leagues are only 15 teams, they didn't include kickers in their top 150, and Quick still wouldn't be getting drafted.

In summation, don't pull the trigger…especially if you're playing in the aforementioned TST league. You've only got 3 WR's that you can 'field' each week, and if he's one of them, you cannot expect the kind of numbers you'll need to win. He'll have his weeks, but temper expectations. Quick will be available on the waiver wire, and with so few people aware that the Rams exist…he's all yours!

Post script - If you're in a TST league AND you want Quick, get him while you can, because 97% of TSTer's negated everything I just wrote. Good luck winning...