Share All sharing options for: St. Louis Rams Week 2: Sure Win or Winless? 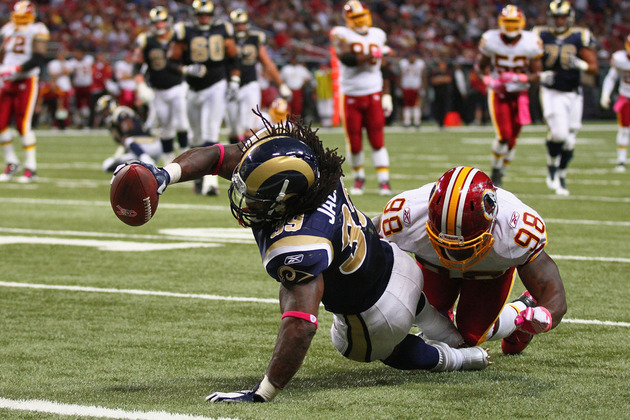 As we creep ever so slowly through the dog days of summer, and toward the kickoff of the 2012 season, things begin to fall into place for NFL teams. Depth charts will eventually shake out, and as they do, fans will begin to further speculate about the quality of their programs, and their potential for success.

For the Rams, a 'return to normalcy' wouldn't be a very promising prospect. Looking one game a time, though, we take a clearer view at when and where the Rams should realize success. With this past poll being judge and jury, the Rams lost Game 1. What now?

So if we're using the results from the poll above, 57% believe that the Rams are going to lose to the Lions in the season opener. There's a bit of a 'gray area' with the 'We're just rusty' response because it's uncertain if the 162 folks who selected that answer are using 'rust' as an excuse for our loss, or are just ready to move on from the loss and get the, seemingly always, sure win against the Redskins in Week 2. Regardless, only 19% of those polled think the Rams have what it takes to win that game.

But what about Week 2? The Washington Redskins travel to the EJD for the Ram's home opener. Maybe it has something to do with the fact that the Redskins organization surrounds itself with constant drama? Over the past several years, the organization has struggled to keep it's fans focus on football. 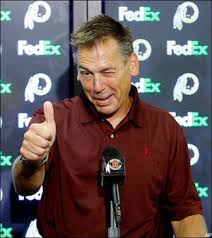 I'd be remiss though, if I didn't mention the $100-million dream - no, not Ted Dibiase. The one and only, Albert Haynesworth. The media force fed you Albert, both day and night. You had no choice. As the ego's of new Head Coach Mike Shanahan and Fat Albert collided, the situation imploded. It effected all facets of their organization, and there were minimals wins to cover the damage.

As aforementioned, much of the criticism the Redskins had received was due in large part to their owner. Dan Snyder has been accused of being nothing more than a fan of the team, who got too involved in the decision making (and money toileting) of the team. Give him credit though, in the past couple of seasons he's remained quiet. He's held his ego in check as Mike Shanahan and Bruce Allen have begun to piece together a semi-respectable product, at least on the defensive side of the ball. But it hasn't come without some drama from the new regime…

Again - and it's no secret - Mike brought in his son, Kyle, as offensive coordinator for the team. Coming out of his retirement, and having signed a 5 year contract, bringing in his son seemed like a no-brainer. Kyle had huge successes in Houston, where their offense was running on all cylinders. Easy enough, right? Take a struggling team, make them good again, and give the team to my son. As Mike is well aware from his days in Denver, to make it to the big game, you're going to need a QB. 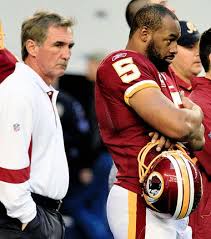 Uh-oh! Incoming failure! In 2010, in a very surprising trade, the Eagles shipped Donovan McNabb to Washington D.C. for 2010's 37th overall pick. He'd gone to the playoffs, somehow not knowing that there can be ties in football, but has never been able to win a Super Bowl. For a team who hasn't had consistent QB play since Mark Rypien, maybe this was Donovan's shot. Wrong again!

It was in week eight, having started the season 4-3 - and down only five points with 3:12 remaining - that it happened. The Shan Clan benched him for Rex Grossman, who proceeded to fumble the ball on his first play.

The Redskins haven't had a winning season since 2007. It's fair to say that the results provided by the current regime have disappointed. In fact, they lost more games last season (11) - in Mike's second year at the helm - than they did the year prior (10). All in all, 11 wins in two seasons is not what Mike Shanahan was brought to the team to do. And as quickly as the seat starts to heat up, he makes his move…

Phoning his old buddy, Jeff Fisher, may have saved his hind end for another season, but will it resurrect his team? If you're reading this and don't know, the Redskins traded up with the Rams in this most recent draft and selected Robert Griffin III. They now have their QB for the future. As with any struggling organization, this young, and potentially elite talent is being looked to as the team's savior.

Probably unrealistic, but not out of the realm of possibility. RG3 is going to immediately be expected to produce wins. The QB the team has been yearning for for so long has finally arrived, and even though it came at a steep cost (yay us!), it was the right thing to do. I'm not sure Shanny had any other choice if he intended on maintaining employment past 2012.

It's not as though he's the only potential threat the Rams will have to face in Week 2, though. It is a certainty that he'll be on the field, using his speed and athleticism to will the Redskins to victory. Their offense, however, will be improved from 2011, even without his presence. While Rams fans waited with great anticipation for their team to scoop up any WR from a very deep free agent pool, the Redskins were a Dyson vacuum, sucking up anyone with two hands.

In addition to the return of Santana Moss and Fred Davis the Redskins will regain the services of a healthy Chris Cooley and Leonard Hankerson in 2012. As if that's not enough to cope with, the now deep Ram's secondary will have to cover the likes of Pierre Garcon and Josh Morgan (nearly had Eddie Royal). Tim Hightower should be back after missing the majority of last season, and will share the backfield with Roy Helu for starting snaps. It certainly doesn't sound like a bunch that should be taken lightly, does it?

As Game 1's poll focused on offensive production (in terms of scoring), and not so much defense (but feel free to talk about how their's is also very good), let's look at the numbers. The Rams averaged 13 points per game last season. The Redskins averaged 18 ppg. They also ranked 14th overall in passing, versus 28th in rushing in 2011.

So there you have it. With these averages, and knowing what we know about both teams offseason acquisitions, have the Rams done enough to outperform the Redskins in Week 2 at home? It's fair to say both teams look to be revitalized, due to either new coaching or players. If the Redskins were able to average 18 ppg with Rex Grossman, should a better figure be the expectation, or are rookie woes in store for RG3, courtesy of a new-look Rams D? He often draws comparisons to Cam (whether wrong or right). If he plays like him, is it still a 'sure win' for the Rams?