Come one, come all! Welcome to your Thursday edition of Random Ramsdom! If DC's version of RR isn't holiday enough, all of America (which unfortunately includes Seahawks, Niners, and Cards fans) can also celebrate the adoption of the flag of The United States. Happy Flag Day, ladies and gents!

Sadly, in my part of the world, it's not a federal holiday, so many Indy-Car-driving, government workin, regular day-offin, a-holes will still litter the interstate with their texting hand at the ready. Unfortunately, this day does not celebrate the driving of vehicles from 1916, which I'd find more entertaining, but more so the celebration of our beautiful flag's 'birthday.'

Throughout the country, from Memorial Day through Independence Day, American flags sell like hot cakes at a table serving breakfast loving St. Louis Rams. Trust me...while you're hammering beers, and eating varieties of delicious meats, I'm watching them roll through the registers. And though I'd suggest letting that beautiful red, white, and blue take the main stage in/around your home, there are other ways to show your pride...as a Ram's fan. Let's take a look at how you stack up with the other neighborhood football dudes! 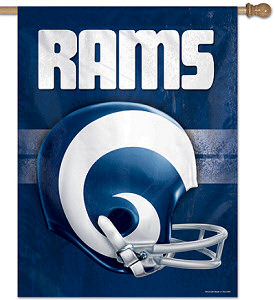 DC's Take: You are a bad ass. Simply put. That flag waves even when there's no wind. You're a long time Ram's fan, and you clearly have control of your home. Otherwise, there'd be a cardinal or a hydrangea on that flag. Also, you don't need to explain to the Mrs. why the colors on the flag are wrong. Because they're not...

DC's Take: Kudos to you, sir! You might as well be Neil Armstrong. You've staked your claim, and done so with pride. Your neighbors may think you've gotten the flag at 80% off due to the Ram's recent re-habitation in the gutter of the NFC West, but you're proud....and you had the money, post-discount. They notice your swag... 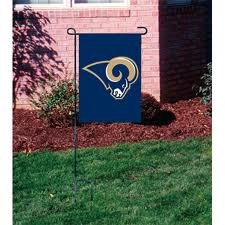 DC's Take: You're good. Slightly less machismo with this little ditty, but you're still in the yard. The yard is where man stuff happens. Lawn mowin, beer drinkin, sleeve cuttin, reminiscin. In broad daylight, at the perfect angle, and with the right set of bifocals, someone might notice who you're watchin on Sundays... 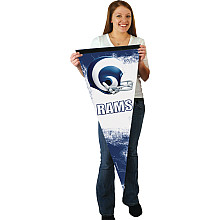 DC's Take: Alright, things are starting to spiral out of control. Neighbors and passers-by have no idea who you're in the basement cheering for. Don't fret...you're in the 'man cave.' A man's fortress of solitude. The 'no chick' zone. Not quite...what it means is that you've been relegated to the coldest, dampest room of the house, and you've got a $7.99 isosceles triangle (and possibly spider bites) to show for it... 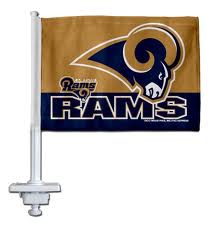 DC's Take: You have no pants...someone else is wearing them. Your home is Ram-free, and your car/truck is your only way of showing Ram pride. Let's hope you've got TV's in the headrests...and a urinal. Your buddies are going to love watching the game on your 7.5" LCD's. As you cruise down the interstate, those flags are as whipped as you are. Should've spent that dough on some window tint...

While you rush to rip the flags off your vehicle, the rest of you please feel free to enjoy some Ram's news

A lil Q&A With My Man Jim Thomas

Take a look at these questions, posed by Ram's fans to St. Louis' own Jim Thomas. From rookies, to free agents, to the status of 'the elbow,' to all things Rams, James fields your questions....and James chucks you some answers!

Hey Walt! Any Update on the Draft Board?

We checked in with Walt about 3 weeks ago, and he's got the Ram's (with their own selection) drafting Robert Woods [USC] at #4. That's probably not where we'd like to be picking, but what's the fun of mocking without total inaccuracy? He's also got us scooping up D.J. Fluker [Bama] at 16. Here's yet another mock in which the Rams perform slightly better and the Skins slightly worse. Whatcha think?

NFL Power Rankings Now that Free Agency Is Over

You guys love Bleacher Report. Oh no, that was Kate Upton....and Cheetos. Power rankings are almost as good, though, no? Without further ado...the Rams ranked...

Yahoo! Ranks the Top 10 Running Backs In the NFL

Would you be surprised if I told you that Steven Jackson didn't make this list? Good, because he's in it. If you want to find out where, just give it a little clicky clicky. See what this New York Giants fan had to say...

If It's On The Internet, It's Got To Be Legit Right?

More Bleacher Report for ya! Here's each NFC West's team final (predicted) record. A little low if you ask a hopeful DC. Way low if you ask some of TST's optimists...ValdezY

Alright......for those of you who successfully dismounted 'your pride' from your car or trucks window, welcome back! Feel free to scope out some of the Ram's headlines above, otherwise, let me show you another manner in which using a Ram's flag is just downright wrong! 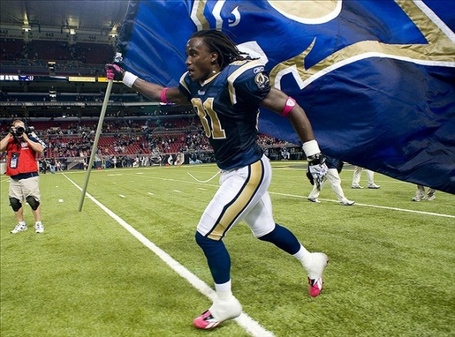 That right, Mardy! As the better uncle from Full House would say 'Cut-It-Out!' If you ran with that kind of intensity when it mattered, you might still be a Ram. To think, like Hulk Hogan, that you'd run out onto the field waving the blue and gold, and that would somehow right the wrongs, you're sorely mistaken. Your feeble attempts to win us over are not only futile, they're infuriating. Thank goodness, someone who'd trained, said their prayers, and eaten their vitamins was there to slow you down... 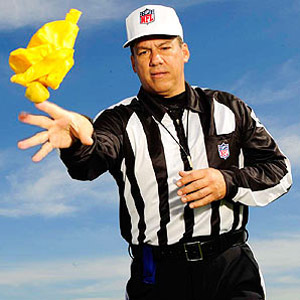 As a Ram's fan, we want to see our investments pay off. When you're unable to grasp the playbook, and therefore see playing time, you cannot win us over by taking someone else's job....especially in a down economy, with so many people desperately seeking employment...penalty! 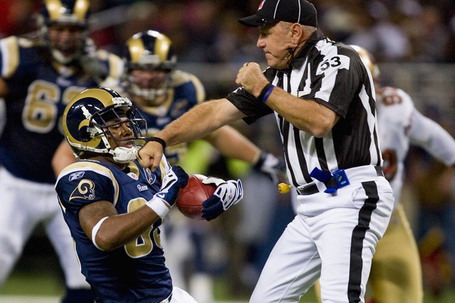 Whoops! Wrong Guy.....let's face it, someone needed to be knocked out for handing him that flag. Sorry Darby...While he tries to regain consciousness, here's some other sporting news

The 11 Most Dangerous Sports

You may be surprised at the order! With all of the concussion issues that the NFL is currently battling/coping with, does that make it the most dangerous sport? You'll have to click to find out, but beware because #12 is clicking links recommended by DC!

Odd At The U.S. Open

Coming off an amazing finish to last weeks Memorial - which was clutch, in case you missed it - these odds may not surprise you. BUT, as is optimism for Ram's fans, a whiff of resurgence brings about heightened, and immediate, expectations. Take a gander...

A Dozen Or So Funny Sports TV Gabs

The Jaguars Are The Most Relevant Team In The NFL 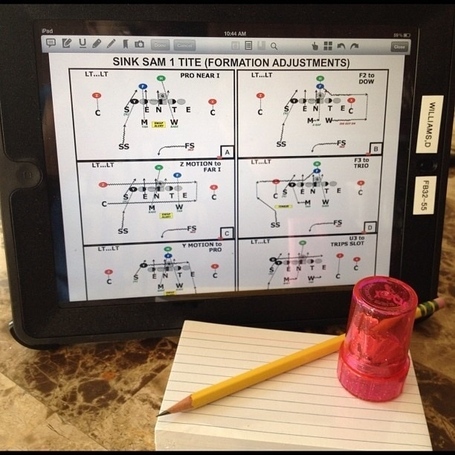 You want to meet Jeff Fisher? Ok, I'll be honest…I have no clue if he'll be here or not, but if you live in LA, and you want to show off your finely tended to, championship quality facial hair, mark your calendar! I'd do some research, though, because if Fish IS there…you're a silver medal at best

Mind Your Brains At The DMV

Just when you think you've seen or heard it all..... Zombie drivers! I've seen a lot (and I mean a lot) of zombie movies. Quite frankly, it's my favorite genre. George Romero is my homeboy! But I digress.....If you've seen any/many zombie movies, you've seen differing levels of cognitive thinking, and variations of speed. Simply put, faster is scarier. Well, this Zombie can drive...

Please read this. For you single fellas out there who think that clubs and bars are the place where you'll ultimately meet the woman of your dreams, think again. Golf, though extremely frustrating at times, has it's perks....or perkies. You're on the green.....click it and stick it

This Day in History

...and again, our American Flag. Have a great Thursday, Rams fans. Appreciate you coming through...