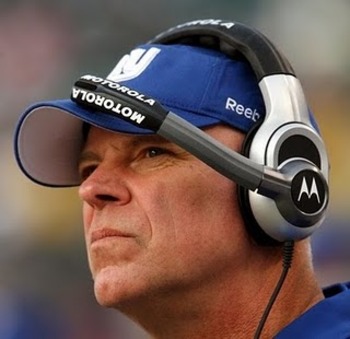 The St. Louis Rams addressed one of the glaring holes on their roster with the 14th pick in the 2012 NFL draft by selecting Michael Brockers, Defensive Tackle (DT), LSU. The team solidified the position further by picking up former Miami Dolphin DT Kendall Langford in free agency.

Coupled with outside edge rushers in Chris Long and Robert Quinn, both previous 1st round draft choices, the Rams are poised to have one of the best defensive lines in professional football. Away we go with a look at who will be coaching up the new look defensive line.

Last year, the St. Louis Rams were abysmal on defense; specifically the running game. While an anomalous secondary gobbled up opposing offenses statistically with 12 interceptions to their credit, and just 166 first downs via the pass, watching the game tape told a different story. With teams able to run at will against the Rams front seven, quarterbacks were able to sit back, for the most part, and pick apart the intermediate and long route coverage provided by the often injured Rams defensive backs. The defensive line is retooled for the 2012 season, and should be complemented by a revamped secondary. Teams entering into grid iron combat with the Rams defense may not have the success they had last year.

In the 2011 regular season, the Rams run defense gave up a horrific average of 152 yards per game. While Long and the rotation on the other end of the line were successful at getting to the quarterback, sometimes busting the edge seal on run plays, the middle of the line lent almost nothing to the equation of stopping the run. So who did the Rams front office bring in to coach up the new look defense?

Mike Waufle is the new defensive line coach for the St. Louis Rams. Formerly of the New York Giants and Oakland Raiders, Mike brings a wealth of experience and knowledge to the table. Having worked with former Rams head coach Steve "Golf Clap" Spagnuolo in New York, Waufle played a key role in the Giants defeat of the then undefeated New England Patriots. One need only look at the Giants defensive front over the last few seasons to see the fruits of Waufle’s labor. Many credit Spagnuolo’s blitzing schemes with the Giants sacking Tom Brady 5 times in Super Bowl XLII. However, it was Waufle’s defensive line that got the job done in the trenches.

Waufle spent 2010 and 2011 coaching the Oakland, Raiders d-line. The Raiders tied for 2nd in the league in sacks his first year on the job, with 47 quarterback pancakes to their credit. The team had a drop off in production in 2011 with 39 sacks. He also coached up Richard Seymour, the once brilliant sack master in New England, helping him to return to the Pro Bowl in 2010 and 2011. One of the most impressive statistics of Waufle’s 15 year career as a coach is his teams have finished in the top 10 in sacks 7 times during his tenure. Let us not forget Waufle’s previous stint with the Raiders from 1998 to 2003, where the team racked up 3 AFC West titles and a trip to Super Bowl XXXVII. During his time with the Raiders and the Giants, the defenses averaged 40 sacks per season, the high water mark of that time being 53 regular season sacks with the Giants during their 2007 Super Bowl Championship year.

Besides serving his country as a United States Marine, Waufle attended and played for Bakersfield Junior College and Utah State on the defensive line. 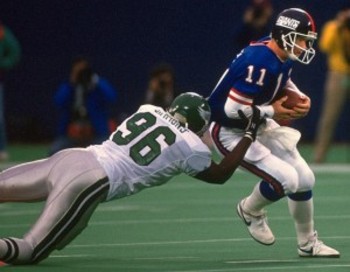 Nothing spells success like a former NFL player turned coach. Well…Sometimes?) Simmons is hoping his former career will help as an assistant coach. Simmons is a 15 year veteran of the NFL, retiring in 2000 with 121.5 sacks to his credit. Now famously known for suggesting on HBO’s Hard Knocks that someone pick a fight with floundering defensive lineman Vernon Gholston to light a fire under him; Simmons is not afraid to call a spade a spade. Brought into the New York Jets facility under the minority coaching fellowship program, Simmons has quickly caught on to coaching. Rex Ryan, head coach for the New York Jets, has this to say about Simmons:

"He’s an expert. He’s a guy that clearly the players would look up to, and they’d respect. I think he’s on the top 10 of the all-time sack list for this league, so it’s hard to ignore that fact and just the way he is, his personality. I had him in Arizona, and he was a leader back then for me when I was coaching defensive line. I thought he’d bring that to us, and he has. He’s been outstanding". Well if Rex says the guy is gold, who are we to question it?

There are many contrasts to draw from the current defensive line staff to last year’s failed regime. Brendan Daly, the Ram’s defensive line coach for the past 3 seasons, while not solely responsible for the Rams poor play, contributed some measure of success to the Ram’s trench diggers.

Rams Chris Long and James Hall both had career years under Daly in 2011 and 2010 respectively. The team registered 43 sacks, well enough for 7th in the league in 2010. Daly was groomed in the Vikings organization, where the defense led the league in rushing defense for three consecutive years.

When Spagnuolo was brought on board, he hoped Daly would bring some rushing defense with him. But the Rams were lacking run stuffing defensive tackles, and Daly’s tenure here in the Lou was short lived, as was Spagnuolo’s.

While Daly may have had a measure of success with the Rams, Waufle and Simmons bring more to the Rams defense. Waufle has the coaching resume that brings in instant credibility, and a toughness which far exceeds the old regime. Simmons offers the experience of having played in the league, and can relate that experience to the Rams young players in a way they understand. The Rams have put a lot of time, and even more money into the defensive front. They have also added the perfect complement of coaches to their staff to get the most out of their investment. Time will tell as they say, but with the shiny new defensive line, and the Ram’s new coaching staff, it may not take very long at all to see an NFC West banner being raised in the Edward Jones Dome.