TST Exclusive: The Spags and McDaniels Playbook That Never Was

Share All sharing options for: TST Exclusive: The Spags and McDaniels Playbook That Never Was

(All sourcing of the following should attribute to Turf Show Times)

Earlier this morning, I was sent a copy of a playbook that former Head Coach Steve Spagnuolo and former Offensive Coordinator had been working on prior to their dismissals.

Knowing that their chances of being retained were low, the two collaborated late into the night on New Years Day, just hours after the Rams lost to the San Francisco 49ers capping off a miserable 2-14 season. Working under pressure, the two created some of the most inventive, groundbreaking and unusual plays ever crafted by man.

I can't release the entirety of this playbook to the general public. I doubt society would be able to handle it. Heck, I feel a bit like in the Matrix when Lawrence Fishburne gives Keanu Reeves the rundown on the whole nuclear/robot/end of the world sitch, and he can't handle it and barfs up some oatmeal. And I haven't eaten oatmeal for decades.

So here are four plays from the playbook, and some thoughts on each. 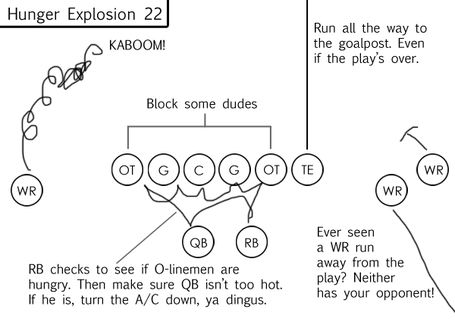 - The running back has some key duties in this play. One of the major themes to come out of the work Spags and McDaniels put in that night was that a hungry player is a weak player. To make sure players reach their maximum potential, they need to eat every so often. To that end, the two discussed whether they should recommend that a "Golden Super Buffet" be placed behind the bench lest a player feel hunger pangs at any point in the game. Oh, and if your QB is a little sweaty? Turn that air conditioning down, dingus.

- The flanker has a difficult job here as well, in that he just kind of ambles around a bit for a few seconds and then spontaneously combusts 12-15 yards downfield. It helps if the QB pump fakes in his direction at some point.

- The tight end just sprints to the goal post and touches it like a sprint in practice. Stay focused! 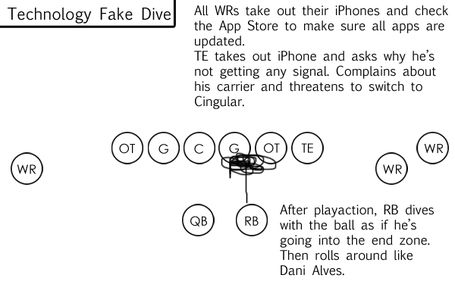 - This is a bit like the FSU frozen linemen play when the an opposing D-lineman jumps offsides. Upon the snap, all receivers and tight ends take out their iPhones; if your receivers have Android or Windows phones, the see "Technology Fake Dive Smartypants". Keep those apps up to date!

- The RB really has to sell the injury after the dive. You can't just pull a New York Giants-esque fake injury. No, you have to convince God himself that your tibia has snapped in two. Use this as a starting point. 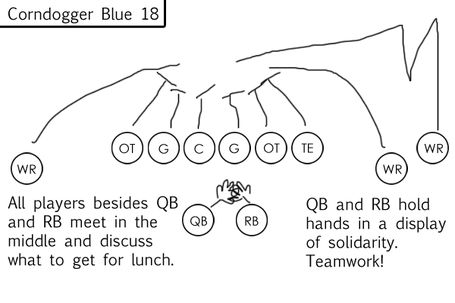 Flanker: "Where y'all wanna go for lunch"

Right Guard: "I was thinking Applebees."

Left Tackle: "Dude, you always want to go to Applebees."

- Obviously, you're not going to get much yardage on this play. But you can really intimidate your opponent with the show of solidarity between the quarterback and the running back. Let your opponent know that your team stands behind one another. Your spirit won't be broken. You may want to teach them how to sing I'd Like to Teach the World to Sing. These colors don't run. 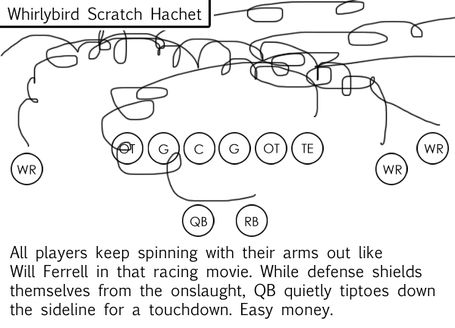 - The WR coach really needs to be on his game to get his guys to run this play correctly. You can't just aimlessly spin. You'll get too dizzy and discombobulated. Spin with a purpose. Maintain your discipline. GO. FOR. IT.

In the next installment, I'll include some of the running plays as well as a couple pages where Spags and McDaniels considered using a variation of the A11 offense.