The PBP: Michael Brockers and the Power of Power

Share All sharing options for: The PBP: Michael Brockers and the Power of Power

For the first Playbook Projector piece of 2012, we're going to look at the Rams' first selection of the 2012 NFL Draft: Michael Brockers. (NOTE: If you haven't read the previous installments of the PBP, I highly suggest you do so. The PBP piece on gaps and techniques is especially relevant.)

On February 22, 2008, just a few days before a Spagnuolo-coordinated New York Giants defense (and one of the most unbelievable plays in sports history) ended the Patriots' perfect season, Brockers committed to attend LSU. A 6'6", 260-pound defensive end upon signing, he blossomed into a powerful nearly 290-pound tackle as a RS freshman going into the 2010 season.

While there were concerns that he wouldn't be able to apply his newfound weight to his overall game, the experience as a defensive end was enticing to LSU fans to say the least. By the middle of the season, Tiger fans knew they had a special player that would be a force as a starter by 2011. They were right.

In this installment of the projector, we'll look at what makes him such a difficult lineman to block and how he can impact the Rams' front four in 2012.

Three things jumped out at me going back and watching the dozen or so games I watched from Brockers' two seasons in Baton Rouge: power, athleticism and awareness.

More than anything, the power Brockers exhibits in both the run game while holding gap discipline and the passing game with the bull rush is exceptional.

Take this play from the BCS Championship earlier this year: 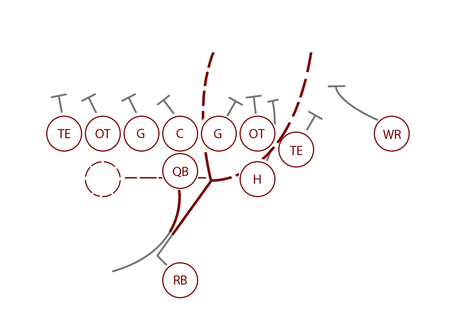 Brockers is going to engage Alabama RT DJ Fluker (he himself, a strong OT prospect as a redshirt junior this year). As he does, RG Anthony Steen is going to chip in, as well as a hesitation block from TE Brad Smelley. The play is supposed to open up the strong A gap between C William Vlachos (a UDFA with the Titans) and Steen or the C gap on the outside. The RB should be able to isolate a linebacker and fake going into a gap to draw him in and then accelerate through the other. But because Brockers and fellow LSU DT Bennie Logan keep that A gap closed, RB Eddie Lacy is forced to take it outside where Brockers and DE Barkevious Mingo are waiting (NOTE: Brockers is #90 in all videos):

Steen weighs 303 lbs. Fluker's listed at 335. Neither could move Brockers from his spot, though he goes down to his knees to keep his leverage before making the tackle.

From the 2010 LSU-Bama game, check out this play where Brockers, lined up at RDE, literally throws LT James Carpenter (who himself was surprisingly drafted by the Seahawks late in the 1st round of the 2011 NFL Draft):

Again for reference, I go to the weight - Carpenter was listed at 300 pounds. Michael Brockers was a RS freshman at the time.

The key for Brockers is going to be learning how to implement that power. Being strong in and of itself does not comprise a full DT skill set. If it did, we'd just draft Brian Shaw and call it a day. Still, there is obvious impact in multiple facets of the game with just power.

And while Brockers has a tendency to get too tall and lose leverage, when he doesn't, well, it's tough to stop a tractor. Check out the strength in this play from the LSU-West Virginia game from last season:

That's Brockers taking a double team right into QB Geno Smith's grill. In doing so, Smith has to angle his pass high enough to get over Brockers' potential attempt to block the pass. And no, it's not easy to see your target and set the trajectory of your pass with a 300-pound man pushing 600 pounds of man two feet in front of you.

The key is that some plays are going to require Brockers to find ways to implement that strength beyond just plowing straight ahead. Sometimes, he's going to have to be kinetically intelligent enough to use his feet and hands to create a different angle and then bull rush.

Check him out in this video taking on LG Chance Warmack from 2010. He's going to engage directly, but then work to the inside and, again, put Warmack right in front of the QB, Greg McElroy:

As Brockers' frame has filled out, he's developed an elite level of strength in his upper body and (at a minimum) sufficient strength in his lower body. At the college level, that allowed him plenty of success from the start. But moving to the NFL means the competition he'll be facing in the trenches every Sunday will be bigger, stronger, faster and (most importantly) smarter than the average interior lineman he faced on Saturdays.

In order to be consistently successful at this level, Brockers is going to have to implement his experience as a defensive end in high school and apply his natural athleticism.

For a man of his size, Brockers is unnaturally athletic. Already stronger than the defensive ends, Brockers is quicker than Fred Robbins, Gary Gibson and Justin Bannan. That's a dangerous combination.

And it's deceptive quickness. It's not Dontari Poe 40-time useless speed. It's the kind of quickness that allows him to make plays like this, from that 2010 Bama game:

By this point in the third quarter, every time Vlachos has been assigned to Brockers, he's failed. And Vlachos was a very successful center who I'm surprised wasn't drafted, so it's not as if Brockers is going up against scrubs here (does Bama even have scrubs?). But Brockers' feet are incredibly quick here- side-stepping Vlachos, accelerating into the running lane, delivering the hit.

His instincts in the running game are impressive. Not so much in the passing game, but he's only had two years of football at DT, so there's bound to be some coaching up needed. Still, he's got a rare combination of power and movement skills that you don't see from many DTs:

Last year, we saw our first round defensive lineman rookie block a handful of punts and kicks, providing perfect displays of his athleticism, different than Brockers'. Brockers isn't as fast as Quinn; Quinn isn't as big as Brockers. Quinn runs around people, while Brockers goes through them. That block is the exact foil Brockers will play to Quinn - power and velocity. Oh, and that Chris Long guy is pretty decent too.

But back to Brockers. We've covered the raw strength that anchors his game. And I noted how his athleticism, relative to his size, permits him to find different ways to apply it that other DTs who only have the power facet cannot.

There was a great play I want to revisit from the first LSU-Bama game last year in Tuscaloosa. It's supposed to look like this: 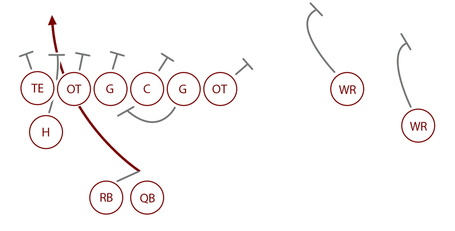 As RG Warmack kicks around Vlachos, RB Trent Richardson should be able to find room to force a decision from S Brandon Taylor and then exploit that decision. Instead, Taylor stays behind the blocking line and as Richardson tries to switch direction, he's tripped up by DE Barkevious Mingo. But if you watch Brockers, he does a perfect job at keeping the backside of the D-line run defense in place in case Richardson chooses to switch directions.

In fact, he's the only one who holds his spot (blue line denotes starting block):

Because Brockers has barely moved (and you can tell Vlachos is incapable of moving him anywhere), it forces Richardson to come all the way underneath the line in order to switch the field. Had Brockers pushed inside, Richardson would have needed to cover less space to break the field (think of a properly run counter).

He does it with his physicality, creating his chance to impact the play. Yes, if he's on the edge, he'll hold it. But if he's inside, he can play to the gap by pushing his blocker out of the way to provide space to get to the ball carrier:

That's 310-pound senior G Alfred McCullough who I think is still on board with the Eagles right now. Brockers just twists him out of the way to wrap up Richardson's feet.

I don't want to dwell too much on this, because it's something he can be coached up on, but there are two key negatives to his game I saw on tape.

The first is getting too tall. From time to time, he has a tendency to straighten up; it's something you see relatively often, especially from lineman as tall as the 6'6' Brockers. Here's a play from early in the LSU-Oregon game on last season's opening weekend; look at the backs of the three down linemen here (Brockers is in the middle): 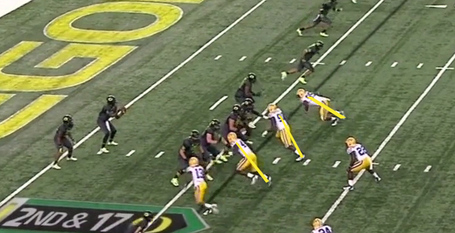 Barkevious Mingo would go in unblocked and force a quick incompletion from QB Darron Thomas, so it wasn't a fatal mistake. Nevertheless, he maintains good angles the majority of the time, so I expect the consistency and the focus to be instilled in him with this staff.

The other problem, rare though it was, was that on stunts, he would often look lost both with his hands and feet. It's a bit analogous to Danny Amendola's confusion beyond 10 yards - it's just not a role he's had to develop. Yes, Brockers played end in high school, but I expect he was just able to go through most of the tackles he lined up against. Unlike guys like Robert Quinn or Mingo or Sam Montgomery who can beat people with speed, Brockers can't. So when he's coming around the edge and needs to apply a rip or a swat & swim, he just kind of locks up with guys awkwardly.

Again, it's something that Fisher can work with him on as well as Chris Long or Kendall Langford, who are transitioning into the "veteran" tier.

With the natural power he exhibits coupled with rare athleticism for his size and impressive awareness for his experience level, Michael Brockers has an impressive skill set that can make an impact for the Rams early in his rookie season.

It's going to be enjoyable to see him line up in the preseason and see if he can replicate the same power advantage he had at the college level in the NFL. The Rams need as much.

Working with Chris Long, Robert Quinn and newly acquired Kendall Langford, the Rams have the potential to form a pretty difficult defensive line to deal with. If Brockers can be the bedrock of the run defense along that line, the Rams' 2012 draft class will have at least one pick that Les Snead and Jeff Fisher can hang their hat on.