The St. Louis Rams are surrounded by question marks at the linebacker position. Concerns aren't just for the players on the field, but also the coaches who will be overseeing their development. In both cases, experience could prove to be an issue. Nonetheless, it could also be a perfect marriage of eager, ambitious teachers and a group of young students who are only entering their prime.

The first and most important of the linebacker group is obvious. James Laurinaitis, the anchor and centerpiece of the entire defense, is already set in his ways as one of the better young linebackers in the league. After #55, things get much less clear. Free agent acquisition Jo-Lonn Dunbar appears to own one of the outside spots, at least for now. He's the second best on the team, but he's hardly a great improvement over Chris Chamberlain. The third and final spot is an enigma - and it's speculation at best for anyone looking in from the outside.

But that's not what this article is about. We're here to talk about their tutors: head linebackers coach, Blake Williams and assistant linebackers coach, Joe Bowden. What are their backgrounds and how will they handle their tasks ahead?

When you're the son of an indefinitely-suspended, highly-scrutinized, yet largely successful defensive mastermind, all eyes are fixed on you. Such is the burden placed on Blake Williams' shoulders after "Bounty-gate" fallout separated him from his father, Gregg Williams, and their building family legacy. Blake has lived and thrived off of Gregg's accomplishments, but now must take the reins of his own destiny.

Williams - a native of Independence, Missouri - traveled extensively as a child, going wherever his dad's career took them. He went to Brentwood Academy in Tennessee and Clarence High School near Buffalo while Gregg was with the Titans, then Bills. In high school, Blake Williams was named his teams' MVP, playing five positions and lettering all four years in both football and track. He quickly learned every facet of the game, playing running back and wide receiver on offense and defensive back, while both punting and place kicking.

Boasting an impressive high school transcript - and parents with deep pockets - Blake was accepted to Princeton. There he played in the defensive backfield, though seeing action mostly on special teams. He again was a four-year letterman.

Players seldom get drafted out of Princeton, and that was a harsh reality that Williams would soon realize. It would not, however, keep him from immediately stepping into the world of professional football.

In 2004, Gregg Williams was hired as Washington's defensive coordinator. Two years later, shortly after graduating college, Blake's coaching career began as an intern underneath his father. After the 2007 season, Joe Gibbs retired, and the rest of the coaching staff was dismantled. Although the Redskins were the fourth best team against the run that year, Gregg Williams was fired, giving Blake little reason to stick around.

Gregg was a hot commodity on the coaching market and, for the second time, the Williams family joined forces in Jacksonville. Blake upgraded his role to defensive assistant. Unfortunately, the Jaguars were abysmal in 2008, winning only five games and scoring 18 points per contest. Their defensive coordinator jumped at the opportunity to bolt for a better gig when his phone rang.

Blake Williams followed for the third time, his job title and responsibilities reached a much greater significance. Aside from also helping on the offensive side of the ball, he did film breakdown work, scouting reports and playbook establishment. He "assisted the defensive staff in all aspects of game preparation."

In the three seasons that they both spent together in New Orleans, the Saints reached the playoffs each year, including their upset Super Bowl XLIV victory over the Indianapolis Colts in 2009. The defense played up-and-down in that span, but was a significantly improved unit that featured both questionable and aging talent.
Everyone knows what happened next. Jeff Fisher, a long-time friend of Gregg Williams, was hired by the Rams. Soon after, Williams was lured away from the Saints and brought his son with him ... for the fourth time. Finally, the Bounty-gate was opened and Blake was left without his father's tutelage for the first time in his young career.

It's exceedingly likely that Blake Williams would never have received an offer from the Rams were it not for Gregg's addition preceding him; however, Fisher has known Blake for a very long time, as well. In fact, Jeff has watched his linebackers coach grow up ever since his time in Houston and Tennessee. Blake should know the drill by now because he's seen it all before, even if he was still a kid.

Williams said, "I told Blake to make sure he didn't tell his mother about all those times in the Astrodome when (current Tennessee coach) Jeff Fisher and I were supposed to be watching him and Brandon (Fisher's oldest son who plays outside linebacker at the University of Montana), and they were running all over the Astrodome. The moms thought we had them under control.

Of course that article is slightly outdated, as Jeff is not currently in Tennessee and Brandon Fisher now coaches in the Rams secondary, but we'll get to that.

Blake has his work cut out for him. Making the Rams linebacking corp a respectable unit is no short order, especially considering that he originally expected to have his father's guidance to lean on. Fortunately he has a stalwart in the middle with James Laurinaitis, and he is at least familiar with Dunbar from New Orleans. Still, he's stuck with a rather daunting task of finding and grooming another outside starter for the immediate future.

What's nice about having Blake on board is that the Rams are essentially still running Gregg Williams' system, with basically the same playbook. By now, he should have a decent understanding of how to formulate the game plan and could be a valuable asset to Fisher and Dave McGinnis on game days. Also, no amount - or type - of punishment can prevent him from picking his father's brain at the dinner table.

I'm always a tad wary of coaches who are barely older - or even younger - than some of the players they are training, but that's why he won't be doing it alone. Assistant position coaches aren't all that uncommon in the NFL, but the Rams will be the only team in the NFC West with one at linebacker. 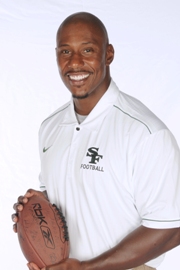 Although Blake Williams has little to no experience devoted to working one-on-one with linebackers, he does have a second-hand man with an impressive resume in that department. Joe Tarrod Bowden III (42), a Dallas native, spent his entire playing career behind the big men on the line. The two have very dissimilar backgrounds.

Whereas Williams went to Ivy League to earn a degree, Bowden went to school with much different ambitions. He wanted to play long after college was over.

Joe Bowden enrolled in the University of Oklahoma in 1988, hitting the field almost instantly. After his sophomore season, he was named the Big Eight Defensive Newcomer of the Year. He was often referred to as a "scorpion-like defender" and is "one of the best linebackers in school history." In 1991, Bowden's senior season, he received All American honors. That year he amassed 75 solo tackles and had two interceptions, both of which he returned for touchdowns.

He would be taken in the fifth round - 133 overall - by the Houston Oilers in the 1992 NFL Draft. Suffice it to say, then head coach Jack Pardee fizzled and resigned midway through his third year, paving the way for Jeff Fisher to take over. If you were wondering if Fisher and Bowden had an earlier connection, now you know.

Bowden excelled under Fisher, earning a full-time starting job quickly. His playing days coincided with the time just before tackling stats were kept and recorded, but game film showed him as a ruthless hitter with good instincts. He stayed with Fisher and the Oilers/Titans up until after the 1999 season, when he started in the Super Bowl XXXIV loss to the Rams. He played one more year with the Dallas Cowboys, but was obviously on the back end of his career and retired in 2001 after nine seasons.

If Bowden can instill this kind of ferociousness, then I feel the Rams linebackers are in good hands.


After his playing days were over, Bowden took part in the NFL's Minority Coaching Fellowship program, through which he received several internship opportunities. He worked with the Bills, Redskins and Texans, as well as a three year stint with the Hamburg Sea Devils in NFL Europe. From 2006 to 2008, he worked as the defensive secondary coach at the University of Central Oklahoma. Most recently he has coached at the high school level.

Joe Bowden's first year with the St. Louis Rams will also be his first year coaching in the NFL. This is all largely new to him, but eight years of experience playing under Jeff Fisher and knowing first-hand how he runs a team can only work in Joe's favor. His tenacity and winning attitude should translate well unto his pupils on the practice field.