Share All sharing options for: Sam Bradford, Chris Long, A UVA Jacket And Some Natty Light

The 2012 season is a big one for quarterback Sam Bradford and the St. Louis Rams. Head coach Jeff Fisher says to erase the quarterback's second season and start over. It's good advice for the coaching staff, anxious fans and the 24-year-old Bradford.

He seems to have had a relaxing offseason too. Last month Bradford and his special lady, model Karlie Koss, traveled to the Coachella music festival along with Chris Long and Danny Amendola.

Bradford and Long also took in a little horse racing in April, hitting up the Foxfield spring races in Virginia. While there, they did a little tailgating, as you can see from the photo after the jump.

St. Louis area residents will appreciate the enjoyment of a fine beverage such as Natural Light. Also notable in the photo, Bradford wearing a Virginia Cavaliers jacket. Was it a "when in Rome" thing? Was he cold and borrowed Long's UVA jacket? 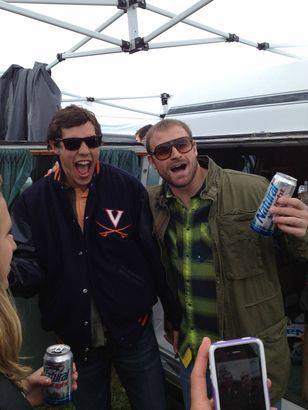 All kidding aside, it's worth remembering that your favorite NFL players are also just regular dudes. Hell, what's more regular Joe Six Pack than Natty Light. They bust their ass to entertain fans, so it's good to see them able to unwind ... even if we might suggest better beverages.