Everything* You Need To Know About The St. Louis Rams Rookie Minicamp But Were Afraid To Ask

Share All sharing options for: Everything* You Need To Know About The St. Louis Rams Rookie Minicamp But Were Afraid To Ask

Rookie football players are descending on St. Louis in droves this week. Why? The St. Louis Rams hold their 2012 rookie minicamp on Friday and Saturday. Every spring after the NFL Draft, neophyte pro football players put on shorts and helmets for a round of up close and personal scrutiny from coaches.

Minicamp schedule, purpose and even an inside look at it from the players' POV after the jump.

For coaches minicamp is the chance to get a feel for where players are in terms of being ready for the NFL. Watching hours of tape is great, but there's no substitute for seeing them work in live action. The depth chart won't be established by Sunday morning, but a goopy, loose form of it will guide what happens when training camp starts.

This will not be the only chance for Jeff Fisher and his staff to get a look at the rookie, because the team has another minicamp and a handful of OTAs scheduled through the middle of June. However, the entire squad, or most of it, will be on the field for those sessions. This weekend belongs to the rookies.

That time with the players is even more important for coaches after the 2011 CBA put limitations on the amount of offseason work teams can conduct.

Coaches used to get more time with the veterans prior to the draft. Fisher made his feelings on the changes clear in a March press conference.

"The third week of April, we are permitted under the new system to have a voluntary veteran minicamp. That comes during draft meetings, and to me that doesn't make any sense."

At that same March 14 presser, Fisher also pointed out the restrictions on giving quarterbacks the playbook prior to the veteran minicamp in April.

"That's correct, and in a quarterback-driven league, it would make sense that you could at least be given an opportunity to develop your quarterbacks or meet with them during the offseason. Hopefully these things will be revisited. Again, I'm not being critical of the new collective bargaining agreement; I'm just saying that's the biggest change that I notice from 2011 until now."

No tweets for you!

On Friday, the team will practice from 3:30 to 5:30 p.m. and again from 10:30 a.m. to Noon on Saturday. The media will be allowed at those sessions, and Fisher will speak afterward.

The media can watch those practices, but real time reporting will have to wait. The Rams are prohibiting media members from using their cell phones for any reason during practice.

Those practice sessions are just two agenda items on a busy weekend for the rookies. According to the schedule handed out to the players, their day starts with a 6:15 a.m. wake up call.

My first question is whether or not that involves something like the bootcamp wake up call in Full Metal Jacket. Maybe they could even bring R. Lee Ermey.

Team meetings, meals, weights, film room ... you can see the complete rookie schedule below, courtesy of Nick Schweiger, an undrafted free agent running back from Dartmouth. 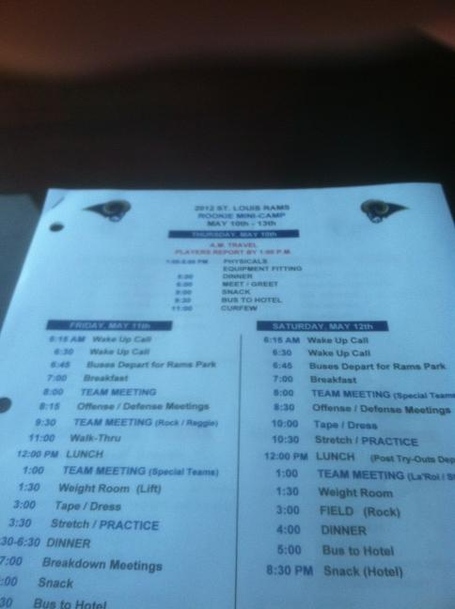 And finally, I doubt rookie minicamp is like this. Can you imagine the CBA fight if it were? The 18-game season would have nothing on that.