The St. Louis Rams - Sam Bradford and the Razor's Edge

Share All sharing options for: The St. Louis Rams - Sam Bradford and the Razor's Edge

No matter how highly touted a quarterback is coming out of college, there comes a time when a rookie honeymoon ends, and the reality of how talented they actually are comes into play. We've all seen "IT". The "IT" I'm talking about can be viewed with a contrasting kind of dualism. Hero or coward, star or failure, at some point the "IT" is labeled, and the story of a quarterback begins to be written with a tenor that will mark him - Forever.

When the St. Louis Rams chose Sam Bradford with the first pick of the 2010 draft, virtually everyone viewed the choice as sound. I did too then, and I do now. Yet, this is the Rams we are talking about, and the trail of losses the franchise has experienced in the last 11 years has made their course look more like a death march than a road to a championship. Fan expectations have a half-life, and for St. Louis fans, radiating love for new members of the team doesn't last long.

Bradford's choice was heralded as a turning point for a franchise in disarray. Coaches came and went faster than contestants on Top Chef. General Managers, all savvy football men from successful NFL franchises, were found wanting as the door hit them on the way out. Into this mess walked Sam Bradford, and in his rookie NFL season he thoroughly impressed the sports writing and fan world. On the strength of his 2010 performance alone, sports writers across the country began to tout the resurgent Rams as a favorite to win the NFC West title. He was named the 2010 NFL Rookie Offensive Player of the Year.

Then "IT" changed. In 2011, the Rams star fell from the proverbial sky. The NFL Lockout, offensive coordinator changes, injuries, dropped passes and missed blocks all contributed to the gravity of life; slamming Bradford to the turf time and time again, each and every Sunday. After suffering a high ankle sprain in a loss to the Green Bay Packers, Sam limped off the field. The injury was a symbol of the Rams season to come. "IT" got it's "i" dotted for some that day, while others waited till the end of the season to decide that it was time to write the story of the "Sam that Was"...

Fan expectations are a fickled thing at best. Try as they might to add in reason, everything that could explain why something happened is swept away by a team's win/loss record. None will acknowledge that the reason they are so eager to wage war on a player who had a bad year has more to do with failed expectations, than it does actual facts. At times, sports fans are the modern day version of lynch mobs, and the gavel's sound is that of public opinion based on hedonism - nothing more, nothing less.

Sam Bradford offers an interesting opportunity to add reason to any evaluation of his worth. Let's face it, the 2011 St. Louis Rams were a terrible team. They were like the Titanic, which was labeled as unsinkable by its builders. Enter the Ice Berg, and the rest is history... The Ice Berg for the Rams wasn't just a single massive obstacle lurking just out of sight below the turf of NFL stadiums. There was a veritable field of ship sinking problems that conspired to sink the Rams in every way imaginable.

I don't believe Bradford experienced a sophomore jinx after his stellar rookie year. What happened to him happened to the entire team. The "IT" just wasn't there because the Rams weren't really there. Not as a team anyway. They had a head coach that should never have left the ranks of coordinators. They had a offensive coordinator that was, in hind sight, one of the worst staff managers and play callers I've ever seen. Josh McDaniels failed Sam Bradford personally too. In his second season, tell me why Bradford suddenly didn't need a quarterback coach? McDaniels sold the Rams owner Stan Kroenke and team GM Billy Devaney that he could handle Bradford's development. Anyone want to offer their opinion on how well that worked out?

Coupled with the fact that a second year quarterback had to learn his second offensive scheme, he's had virtually zero time to feel comfortable with a offensive philosophy. We aren't talking about graduating from Algebra to Trigonometry here. We're talking about a complete shift in the hundreds of facets of how to play the game of football at the NFL level. Changes in the very way Bradford had to envision the game were made, complicated further by a complete lack of support from anyone else on the offense. He was asked to stop being 2010 Sam, and be a Josh-esk Sam that was destined to fail.

Another aspect that should be considered is the physical pounding Bradford took in 2011. I want you to take a look at some video of Sam Bradford throwing the ball in 2010. I'd like you to focus on his throwing motion, but more specifically, his point of release.

Bradford's release point was higher. His elbow was at shoulder height and he came over the top with the ball to the release point. If you didn't see it, go back and look again. It's crucial to understanding one of the reasons why Bradford had so many problems in 2011.

Now have a look at this photo of Bradford's throwing motion and release point in 2011. You'll notice that his arm is "laid out", with his release point coming more to the side than over the top. You'll also notice his hand placement at the point of release, which is more to the bottom of the ball, than at the side of the ball as he gripped it in 2010. This caused two problems: First, it caused the ball to "sail", making it almost impossible to have any touch on the ball. It put enormous stress on his shoulder joint too, as he had to open the shoulder more the further his arm dropped into an almost sidearm motion. Dropping his arm also contributed to the number of blocked passes he had in 2011. He virtually reduced his throwing height by dropping his arm. 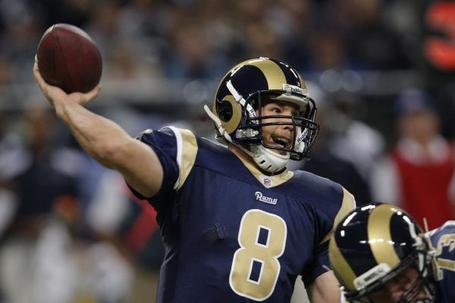 The bottom line here is that the Rams, and their fans, should have concerns about Bradford's shoulder. There are tons of these kind of images, but they didn't start showing up till around week 3 of the 2011 season. He had taken a pounding by then, and whether he injured the arm, or changed his motion because it offered a quicker release under pressure, is for him to know. What I do know is there was definitely a shift in how Bradford threw a pass, and shoulder problems like post surgical scar tissue can cause an impingement that alters regular arm motion. It's the body's natural defense mechanism to relieve pain. But it's also a short lived option for the body, and one that could get worse as the joint is further stressed in this augmented throwing style.

The Rams have a quarterback with enormous potential. Given the right coaching and physical training, Sam Bradford has every tool an NFL quarterback could ever need to be successful. The one thing he doesn't have any longer is time. Last year represented wasted development time he'll never get back. How Bradford will adjust to yet another coach and offensive scheme is anyone's guess.

What I do know, is that anyone who thinks Bradford has even had a single "genuine" NFL season, is really rather batty. Calls to trade him so the Rams can pick Robert Griffin in the 2012 NFL Draft might be fun to ponder, but it would be the worst possible thing to happen for Rams fans if it came to fruition. The Draft is meant to be a source to build a team, not an opportunity for a never ending "Do over". At some point, when the glimmer of something is seen in a player, don't be so ready to see a blade. Time and circumstance are enough of a razor. "IT" can be a razor that cuts deeply, and is forever final...