The St. Louis Visitors and Convention Commission delivered their $124 million vision for the future of the Edward Jones Dome. The plan is the first step in a lease negotiation to the keep the Dome's tenant, the St. Louis Rams, happy satisfied that the Dome meets the "top tier" requirement which would prevent them from wiggling out of their lease. Regardless of your thoughts on the CVC's plan, it's clear that their designers haven't been keeping up with the team.

In what surely must be an homage to the Star Destroyer video board in Jerry Jones' monument to largess, the CVC included a 96-foot video board in their plans for the Dome.

And for the photo they used in the artist's rendering of that score board? 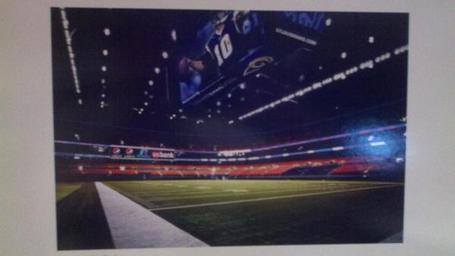 (Photo via KMOV's Twitter feed. They have more on their web site).

That's right, none other than Marc Bulger. What better player to use in order to remind the Rams and their fans of the stunted promises from the team's lost years.

Alex Barron and Tye Hill are said to be pictured loafing in a rendering of the new club level seats.

Then again, maybe it's a useful reminder to the Rams that they need to, you know, actually win some game to make this thing work.