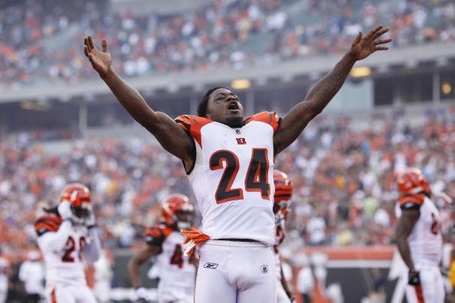 In the second installment of ‘Who Can the Rams reunite with Jeff Fisher’ we’ll venture into the world, and often troubled mind, of the 6th overall pick in the 2005 NFL Draft - - Adam ‘Pacman’ Jones. For some odd reason (and I’m in contact with AT&T), the phones haven’t been ringing off the hook as I suspected they would after posting ‘Stickum"? Saving money, and guaranteeing success, apparently doesn’t appeal to NFl team owners and management? More recently, I provided viable reasons for why a fiscally sound contract for Albert Haynesworth would reinvigorate both he and Rams. Since I’m on an intellectual roll, I will now "make it rain" with reasons why Pacman Jones should be a St. Louis Ram in 2012....

...Let me start by saying that he has loads of talent. His performance in college as a corner back and his kick/punt return abilities certainly earned him the opportunity to be taken high in the 2005 NFL draft. In his rookie season with the Tennessee Titans, he had 1127 return yards, with his long return going 85 yards for a touchdown. The best defensive performance of his professional career came in his second season, where he totaled 63 tackles, 1 sack, a forced fumble, and 4 INT’s. While none of those numbers are necessarily stunning or stellar, he was also a Tag Team Wrestling Champion. Can Cortland Finnegan say that?

Then came, what I like to call, a ‘speculative shooting’ that may or may not have involved Pacman. Sabotage? Just because you throw $100 bills into the air and they land on stage, does not make them the property of the person dancing on that stage! Moreover, I seriously doubt that he ‘repeatedly slammed her head onto the ground.’ My guess is that he was merely helping her get a better view of his Benjamin-s. He could have a mind case of dyslexia too. What if someone asked him to help her up, and he thought it meant to help her down? Let’s face it, there’s no way to differentiate a Pacman bruise from the others contusions this young lady probably had already. Moral of the story: Pacman is aggressive and physical, and it’s just the kind of pizzazz we need in our secondary.

I can hear you saying: "His career stats just aren’t that great, DC." I hear ya! Pacman has indeed been in the league for seven years, BUT he was granted vacation time by Roger Goodell in 2007 and 2009. After his sabbatical in 2007, he returned to the NFL as a member of the Dallas Cowboys. After another questionable ‘altercation’ with his body guard, Mr Goodell felt that Jones needed 4 more weeks of soul searching, which Pacman was kind enough to spend volunteering at an alcohol rehab center. Later that season, after his philanthropic LOA, he returned to the field and on December 7th suffered a neck injury, which some thought could’ve been career ending. Think again! Pacman returned to play the final game of the regular season. Moral of the story: Pacman is tough, resilient - and very well rested.

The current incarnation of Pacman Jones is a member of the resurgent Cincinnati Bengals. In 2010, only 5 games into the season, he suffered another serious neck injury which ended his season. He returned to play the final 8 games of the 2011 season and the Bengals first - and only - playoff game in many years. Before the game, Pacman was brazen enough to compare rookie teammate A.J. Green to Texans Andre Johnson, saying "AJ is a lot faster than Dre...I think A.J. goes up and gets the ball a whole lot better and some of the routes he runs are a little bit better." During the game, Pacman was the recipient of a double move by Andre, which resulted in a 40-yard TD. Moral of the story: Andre Johnson is really good, and Pacman should not upset him - No one should!

…But I digress, and more importantly may even be talking you out of being interested Pacman? Yet, Jones’ contract in 2011 was a very cheap $640,000 and, with his health concerns (if you’d like to call them that), I don’t see the price of his services going up. Look, if you want a quiet guy that will never add any excitement to our team, then Pacman obviously isn’t for you. If you want a guy with some tenacity - and a criminal record - and guns - who may or may not do drugs - who can wrestle AND rap........I think we’ve found a winner!

Should the Rams 'make it rain' for Pacman this offseason?