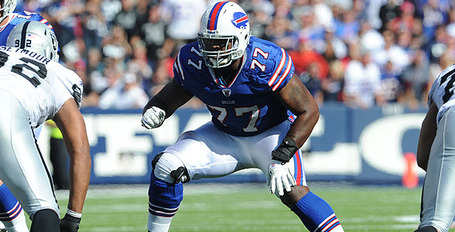 The offensive line is the cornerstone of a good team. If a quarterback cannot stay upright long enough to progress through his reads and find the open man, the team will fail. If a running back doesn’t have an open gap to hit consistently, the team will fail.

There is no mystery surrounding the poor play of the Ram’s offense this past season. The offensive line simply could not pass or run block effectively. Enter Demetrius Bell from the Buffalo Bills. Bell is 6’5" and 311 lbs. The Louisiana native attended Northwestern State and was drafted in the 7th round of the 2008 draft. Having only played football in college, the Bills took the time to develop him, sitting him out of the entire 2008 season. Bell is one of those rare talents a team dug out of the late rounds who actually has made a good contribution to the team on something other than special teams.

Bell started at Left Tackle for the 2009 season, only to be on the sidelines after week 10 with a knee injury. Bell went on to recover well from surgery and started all 16 games in 2010. Bell was on and off the field for the 2011 season. He suffered another knee injury and a shoulder injury, only starting 6 games and playing in 7. Bell was part of an offensive line this year that was credited for helping the Bills start off very hot and allowing Ryan Fitzpatrick to pick apart defenses like he can pick apart a SAT test. Not surprisingly, the Bills started their decline soon after he left the field for the season.

While Bell may not be the sexy pickup in free agency, he could come in and play a role on a retooled offensive line.

What say you Rams Fans?