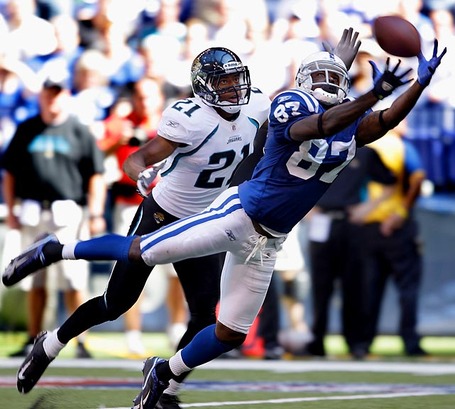 Reggie Wayne is probably one of the most recognizable names in free agency, but hasn’t been mentioned much here at Turf Show Times. Besides being a pass catcher for the seeming guided missiles of Peyton Manning for the past decade plus, Reggie Wayne has been the measure of consistency for the Indianapolis Colts.

The 33 year old New Orleans Louisiana native is 6’ 0" and 198 lbs of pigskin snagging flesh and bone. Reggie Wayne is not the biggest receiver you will ever see, but he runs good routes and has those ever desired soft hands. (Insert joke of choice here.) So what has he done besides be the envy of every undersized receiver in the league?

During his 11 years in the league he has:

As much as the Colts organization would love to have him back next year, he most likely will end up somewhere else before draft day. Why St. Louis? There is much chatter of Blackmon being the Rams number one pick, and if that is the case, why not bring in one of the most experienced and technically sound wide receivers in the NFL to mentor and counsel him? Even if the Rams go another direction in the draft, Sam Bradford needs a go to receiver opposite the hopefully re-signed Brandon Lloyd.

At the age of 33, Wayne will not command as much in the way of salary as Vincent Jackson. Granted Jackson has more upside by being 3 years younger, but this team’s rebuilding is not all about youth movement, as free agents like Tulloch, Finnegan, and others are names being bounced around at Rams headquarters.

What say you Rams fans?