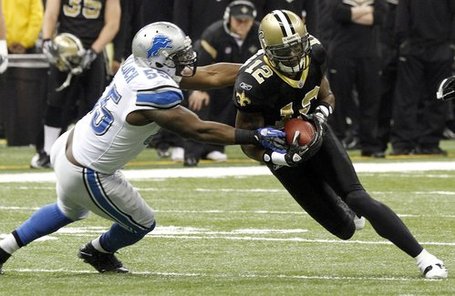 At 5’ 11" and 240 lbs, Stephen Tulloch is the "Pocket Hercules" of NFL linebackers. He was drafted by Jeff Fisher and the Titans in 2006, placing obvious connections to the Rams, and has enjoyed a steady incline in playing time ever since. In 2010, Fisher’s last year with the Titans, Tulloch became a full-time starter, amassing 160 total tackles on the year.

Last offseason Tulloch signed a one-year deal with the Detroit Lions, rejoining former defensive coach, Jim Schwartz. Once again, he was a 16 game starter at middle linebacker. His stats on the year were nothing short of impressive, totaling 111 tackles, 3 sacks and 2 interceptions. Against New Orleans in the playoffs, he made 15 tackles, batted 2 passes and forced a pivotal Marques Colston fumble.

The Lions will likely do everything in their power to get Tulloch under contract long-term, but there is sure to be a bidding war for his services. Having just turned 27, he is only entering the prime of his career. The only concern about Tulloch and the Rams is fan-favorite, James Laurinaitis, who already has the middle of the field locked down. If Fisher believes that he has the ability to play on either the weak or strong side, then I expect the Rams to show interest. The Rams will begin 2012 with at least one new starting linebacker, and Stephen Tulloch may fit the bill.

Would Stephen Tulloch be a good free agent acquisition?