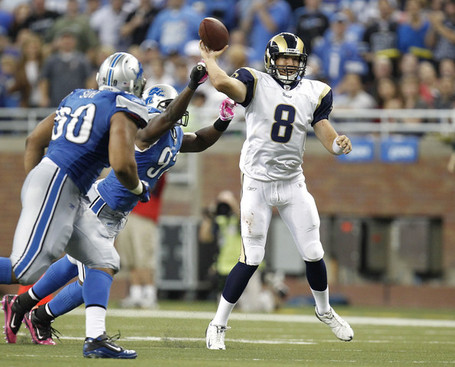 Cliff Avril, a defensive end with the Detroit Lions is perhaps one of the most underrated Free Agents out there. As a standout for the Lions for the past four years, Cliff has recorded 30 sacks. His 6’3" 252 lbs frame is certainly stout enough to handle the role of a rushing or coverage linebacker. The Purdue product had a great college career, starting in 35 contests out of 49, 12 of those starts coming in at strong-side linebacker

One could make the case, and Avril has said himself, that he would be willing to play outside linebacker. He was the top performer at the combine in the 3-cone drill, which measures a player’s burst and ability to switch directions quickly. He also was a top performer in the vertical leap. Can anyone say batted passes? Cliff Avril entered the league the same year our own Chris Long came aboard, and he out performed him. In Cliff’s rookie year he tied for the rookie lead of 5 sacks, following on with 5.5, 8.5, and 11 sacks in 2009, 2010, and 2011 respectively. He has also been a solid tackler on a defense dominated by Suh, with 23, 41, 33, and 36 tackle from 2008-2011.

His health is another high point having only missed 6 games over 4 years. Avril comes from a team who plays indoors, and he excels there, with 26 of his 36 tackles coming under a dome in 2011. Another awesome stat is that Avril has managed to lock up offenses where it counts, on 3rd and 4th down. In 2011 Avril had 26 tackles on 3rd and 4th downs, 12 of them solo, along with 4 of his sacks on those downs.

Could Cliff Avril come in and play outside linebacker and occasional edge rusher for the Rams?