Here’s a list Week 10’s Fantasy Football must-start studs, and a few guys that you should stash away until Week 11. At this point in the season, a lot can be surmised from the matchup with your player’s opponent, in addition to individual talents. I hope you’re hungry, because there are some juicy match-ups in Week 10. Stop on in and seek my sage fantasy advice.

Matt Ryan & Drew Brees (QB) - The final score will be somewhere in the ballpark of 72-63. If you’ve got Ryan, trust that Julio Jones and Roddy White should both have big days, as the New Orleans secondary has surrendered more TD’s than any team in the NFL (16), and only picked the ball off four times. For Drew Brees, it’s just another week where he’ll never hand the ball off. Brees, since joining the Saints, has faced the Falcons twelve times. In those meetings, he’s thrown for 3,639 yards (303 yard per), and has lead the Saints to a win in ten of those twelve games.

Ben Roethlisberger (QB) - The Monday Night Football against the Chiefs could be more of a statement game for the Steelers, who seem to be flying under the radar in the AFC. Big Ben can feel free to initiate the aerial attack from the jump. Geno Smith and Matt Barkley will want to watch this one. Interesting fact: The KC Chiefs haven’t held the lead for a single second throughout the duration of this season

Carson Palmer (QB) - Who saw this coming? Run DMC is hurt again. The Raiders have shown that they’re willing to let Carson air it out, and rightfully so, in their efforts to stay competitive in games where there defense continues to let them down. Over the past three games, he’s thrown the ball 135 times (45 per game), and is averaging over 306 yards during that span. Palmer threw for 414 yards and 4 TD’s in Week 9. It’s quite possible he’s in that realm again this week.

QB who should ride fantasy pine - Jay Cutler - You can feel confident that the Bears are a good team, but they’re in games because of their defense. Cutler loves throwing passes to anyone with hands, including opposing D’s. The Texans have a well rounded defense, that can shut down the oppositions rushing and passing attacks. Look for that grumpy Cutler face to be pointing blame at someone other than himself this week.

Ray Rice (RB) - It’s a no-brainer. You were going to start him anyway, but Oakland’s defense is atrocious. The Raiders give up 124 yards on the ground per game, and have given up 10 TD’s to opposing rushers. Ray Rice isn’t average, so expect that 124 mark to be eclipsed. Also, chalk him up for some serious receiving yards. Oakland’s defense has given up more catches to RB’s than any team in the NFL.

Stevan Ridley (RB) - In all likelihood Tom Brady’s arm will be exhausted by halftime. Steven Ridley might as well be moon-walking into the end zone for the remainder of the game. The Bills Rush D is next to last in the NFL, giving up 170 yards per game, and 14 TD’s. FOURTEEN rushing TD’s through 9 Weeks. In their first meeting (in Buffalo), Ridley scampered for 106 yards and two scores. Look for those stat lines to be replicated this Sunday

Reggie Bush (RB) - I’m not sure this game will be as productive for Reggie as his Week 2 [172yds, 2 scores] performance against the Raiders, but I’d put money down that this week’s matchup against the Titans will yield his second best performance of the season. The last three RB’s to face the Titans D have all run for over 140 yards. Even without a TD, that makes this Reggie’s 2nd best performance. I wouldn’t count on the Titans being able to keep him out of the end zone though. Could easily be 20+ this week

RB who should ride fantasy pine - Fred Jackson - Word on the street is that the Bills aren’t thrilled with Jackson’s production, and therefore C.J. Spiller is going to see an increased role in the offense. Jackson is still legit, but there’s no certainty that he won’t absolutely kill you this week due to lack of touches. That being said, someone dropped him in one of my league’s and I’ll be scooping him up for later this season. I’d suggest you do the same...

Vincent Jackson (WR) - If there’s only player trying to prove a point this week, it’s VJAX. He’s facing off against his former team for the first time since his departure. Over the past four games, he’s averaging roughly 80 yards and a TD in each. Jackson has 4 plays of 40+ yards in 2012. Philip Rivers has 2. Look for VJAX to try as hard as humanly possible to increase that figure, and send a message to all of San Diego. 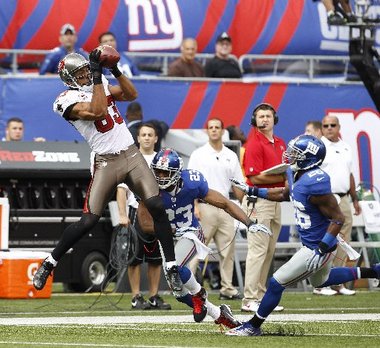 Danny Amendola (WR) - The 49ers have one of best defenses in the NFL, and successfully passing on them will be no easy task. For the Rams, more so Sam Bradford, the return of a healthy DA should help all parties breathe a sigh of relief. He’s quick (not Brian), he’s shifty, and he’s hungry (not like Rok Watkins). Bradford’s birthday was on Thursday. His greatest gift should come Sunday, if Amendola is able to stay on the field for 60 minutes.

Brian Hartline (WR) - I never thought I’d type that name again…ya know, after the Rams completely shut him down in Week 6. Hartline is lining up against the Tennessee Titans this week though, and he could easily get you double digit points in this game. #1 WR’s have been feasting on the Titans secondary in 2012. The Titans D ranks 27th in the NFL against the pass, and when Hartline snags eight receptions per game, he’s been good for 100+. Expect him to see double digit targets on Sunday

WR who should ride fantasy pine - Dwayne Bowe - You’re going to have to swallow your pride on this one. I realize that Bowe went 2nd round[ish], but that doesn’t matter for Week 10’s MNF game. Tell yourself that the Chiefs will be playing from behind, and that they’ll have to throw. You’d be right. That won’t equate to success this week, though. Find another option.

Vernon Davis (TE) - Going into the FF draft, owners were willing to draft three TE’s early, as their stats were comparable to even the league’s best WR’s. Davis, amongst Gronk and Graham, is a must start in most weeks, but you can’t have warm and fuzzies if you’re a Rams fan, having seen what the aforementioned Gronk did two weeks ago. My sources tell me that Jim Harbaugh and Co. spent the bye week preparing for this matchup, and if they happened to catch any film, they’ll be trying exploit the Rams the same way the Patriots did.

Owen Daniels (TE) - The Bears defense has been impressive, so this one could be risky. Daniels though, gets targeted often in this offense, and has scored 5 TD’s in his last six games. Don’t be shy about playing him again this week. Even if he doesn’t find the EZ, he’s easily good for 7 or 8 points just on yardage alone.

Jermaine Gresham (TE) - Gresham is more a sleeper this week, in my opinion. The Giants defense has done well against opposing TE’s this season, but Gresham’s success will boil down to amount of targets this week. When TE’s are targeted more than six times - which he has in five of his last six games - they’ve eclipsed 75 yards against the Giants D. A large red zone target, Gresham could easily see double digit fantasy points in Week 10

TE who should ride fantasy pine - Kyle Rudolph - I’ll admit that I was duped by Rudolph, though I also capitalized on his early excellence. Just four weeks into the season, Rudolph was a Top-5 TE. Now, he’s being limited to less than 2 points per game over the last three weeks. His role could increase if Harvin sits, but there’s no guarantee. I’d look elsewhere…and then I’d never look back.

Holla at me here in the comments section, or feel free to shoot me a line on the Twitter machine