Good Thursday morning Rams Fans! As always, I hope it finds you well. It certainly can’t be all bad. I’m positive that it’s been a while since you’ve been able to say that your Rams have gone 1-1-1 in their last three games. Certainly odd…a tie. Well, it’s that time again. Sunday marks the kickoff the 6th quarter of play against the San Francisco 49ers to find out who truly is the superior team in 2012. The 49ers head to St. Louis this weekend, though, where refs don’t throw the flag when Legatron finishes the game off…and Brandon Gibson knows where to line up…the sideline.

Share All sharing options for: Random Ramsdom 11/29/2012: [Un]Settling the Score

Danny Amendola Is Back In A Walking Boot

Uh oh! Danny Amendola appears to have a booboo. For a guy who’s as brittle as he his, there’s probably no chance that he sees the field on Sunday when the 49ers come to town. OH WAIT…this dude is as resilient as they come, and he’ll probably play IN walking boot, or without an elbow or clavicle. Don’t count him out.

Coming off of a Week 12 win, there’s more good than bad and ugly, but this week’s divisional opponent will certainly be no walkover. Depending on which Rams squad shows up on Sunday will determine how the Rams grade out for Week 13. Peep the stock watch…a $6million stock appears to be falling.

A 49ers v. Rams Preview: From The SF Gate

It wouldn’t be fun if I found a St. Louis paper, or a Rams-biased source to provide us with the preview. First off, they’d have the Rams win by three. Second, it wouldn’t be anywhere near as hilarious and inaccurate as one from a 49ers source. The last paragraph, hands down, is my favorite. Enjoy!

The Rams Are "Finally" Developing An Identity

I found this article intriguing, mainly because I was captured by the title. Whether or not the Rams - under Jeff Fisher - have an identity or not, to me, is still up for discussion. "Inconsistent" would probably be my most fitting descriptive word, but Rant Sports has another take on the matter. One thing is for certain, though, and that’s that the Rams play the NFC West very well. If that’s our identity, then I’m comfortable with that.

If my chances of guessing this were anywhere near the odds of winning the $550mil PowerBall, I’d be really rich…or really right. They can call it ‘playing the hot hand,’ or whatever they want to call it, but it’s nothing more than a facade. Colin Kaepernick was drafted last year, by Harbaugh and Co., and is outplaying Alex Smith. I would’ve liked for them to go back to Smith on this one...

Chris Givens is a beast, and for that, we should have been [and should be now] thankful. Like the majority of the Rams 2012 draft picks, when given the opportunity to prove themselves, they shine. Chris Givens has outdone himself as a 4th round selection. ESPN’s Mike Sando breaks down some pretty telling statistics on just where he ranks amongst the rest of the Rams WR corps.

Your Saints @ Falcons Preview: Well this should certainly be an offensive doozy. If you like watching football where no one is ever running it, then you’re in for a Thursday Night Treat. As two of the top four of the NFL’s leading passers face off against one another, this game may be short on a decent intro song, but won’t be short on loooooooooong bombs. CBS has got your preview

For those of you hoping that the Rams would add DE Jason Babin for ‘depth’ on the D-line, I send you my condolences, for he was acquired by the Jaguars today. If there’s anything that might help you find solace in the fact that not even the Chiefs wanted to claim him. He signed a 5yr, $28mil deal last summer. Rams can find a better way to spend their money

Get It While the Gettins’ Good: It pains me to remind you of how deep we are into the college football season, and though this game may not be Top-25 rated teams, it’s Big East Football, and it’s two teams that find themselves at 9-2 at this point of the season. There are many that think NCAAF is far more exciting than NFL games. That may not be the case on Thursday night specifically, but if Saints/Falcons isn’t up your alley, this game might suit your fancy. Here’s your preview...

Having an older brother can be difficult. I wouldn’t know because I’m the oldest, but ask my lil bro and he’ll tell ya it suck. Damn, is it ever fun to be the eldest...

As an older brother, it’s my responsibility to lead my younger brother(s) astray, and laugh in the wake of their failures. Give them advice contrary to statistics, and see what happens...

You got lucky this time, broseph! Even though you fell for the oldest trick in the NFL trickery book - the "throw the challenge flag with no timeouts" bit - replacement ref Ken Roan was there to make it all right…by granting you an undeserved timeout. "Who’s got it better?!?!" 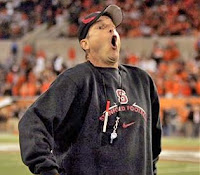 Well, lil guy, I can’t argue with you there. You’ve got a solid football team put together, and despite my best efforts, you haven’t lead your devil-spawn team astray. You certainly know how to - and always have - taken your shots…however they may come

If you feel me flow - like Naughty By Nature - then you can read extremely well. You made a solid move by coming to Turf Show Times for your Rams news. Double up on that by following your boy on Twitter