The second pick wasn't nearly as instinctual as the first. Let's take a look.

Share All sharing options for: Breaking It Down: Janoris Jenkins' second pick six

In the previous breakdown, the Rams came out in nickel cover 2. This play we see a blitz from the Rams with man coverage on the outside. The blitz doesn't get home, but it gets enough pressure to force a bad throw from the rookie, Ryan Lindley. Let's take a look at it.

The Rams come out in 4-3 personel with Cortland Finnegan and Janoris Jenkins on the outside. Janoris lines up in bump-and-run on Larry Fitzgerald. 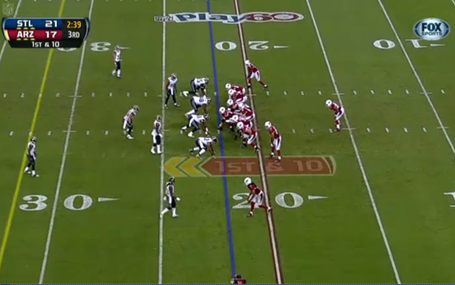 James Laurinaitis and Jo-Lonn Dunbar blitz as the Rams attempt to overload the right side. Rocky McIntosh is in man-to-man coverage on the tight end, Finnegan is in man-to-man on the outside, and Jenkins has safety help over the top from Craig Dahl. 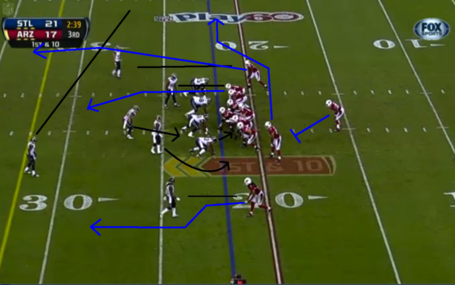 Following the snap, we see the Rams commit to the blitz, with man coverage and safety help over the top. The Cardinals look as if they are attempting to challenge the Rams base cover 2, by attacking it vertically. The Cardinals also leave their running back in to help with the rush.

While the blitz doesn't get home, it pushes the pocket and forces Lindley to retreat. Mikell follows the motion and then burns it across the field to cover the out by the tight end. Dahl rotates over to give Jenkins help over the top, while Finnegan completely whiffs on his jam giving the Z receiver a free release. 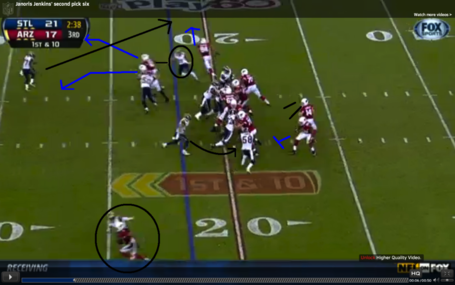 The Rams push the pocket and force Lindley to throw off of his back foot. McIntosh does a good enough job on Housler, and the backside of the play, where Finnegan is in coverage, was never even considered. 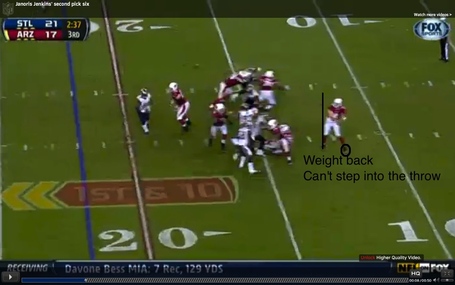 Janoris will run step-for-step with Fitzgerald and flip his head around once he sees Larry start looking for the ball. 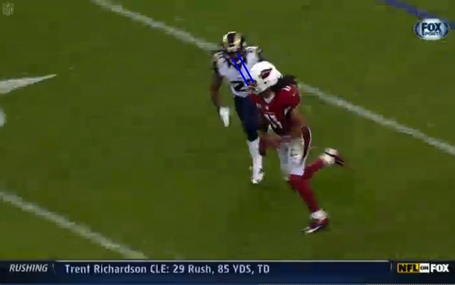 Fitzgerald looks back for the ball, so Janoris mirrors hims and looks back, sees the underthrown ball, plants his foot, and makes the interception. 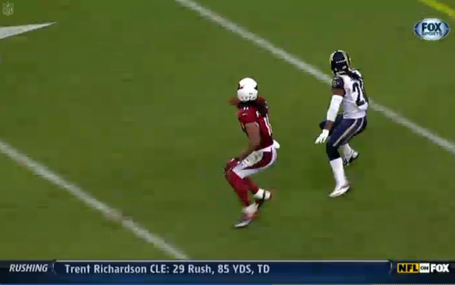 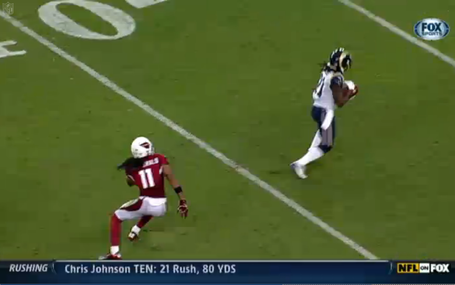 Janoris will then catch the ball and explode down the field and into the endzone, adding a high step for good measure. So, not only did Janoris have two pick sixes, he did it in two different types of coverage. Janoris Jenkins was a steal in the 2nd round and will torment the NFC West for the foreseeable future.