Walkthrough: Lance Kendricks, Sam Bradford remind us all that the play-action works

Join us for an entertaining, educational look at Lance Kendricks' touchdown.

Share All sharing options for: Walkthrough: Lance Kendricks, Sam Bradford remind us all that the play-action works

Lance Kendricks caught one pass on Sunday, and it was a big one. The St. Louis Rams offense struggled to start the game, finally getting some breathing room thanks to Janoris Jenkins' first pick six. In the second quarter Bradford, who shook off some struggles of his own, found Kendricks in the middle for a 37-touchdown pass.

Steven Jackson's big day turned some heads, but the Rams weren't running the ball as much as they should have been until the last drive of the second quarter. It started out like all the others, a pair of incomplete passes put the Rams at third-and-10 when Bradford hit Chris Givens for an 18-yard gain and a new set of downs.

At that point, the Rams had throw the ball 11 times and ran it only eight, not a huge differential, but not what you would have expected from an offense facing a Cardinals defensive front without Calais Campbell.

With a new set of down, the Rams ran it three times. Jackson picked up 15 yards on three carries, but the last one was erased by an Arizona penalty that gave the Rams first-and-5 from Arizona 37-yard line.

That's when it happened.

The Rams come out in the shotgun, three receivers and Jackson in the backfield. Kendricks is lined up with his hand on the ground next to Rodger Saffold. He's out there like a blocker, which is more often than not what he's doing. 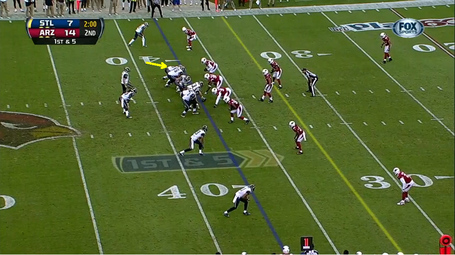 The ball is snapped, and Bradford fakes the handoff to Steven Jackson. Arizona keys in on that, and why shouldn't they. Dahl pulls to the left side. Kendricks shoots down the field without making contact and heads for the seam.

Note Arizona's two middle linebackers staying right where they are, following the action in front of them. That's key. 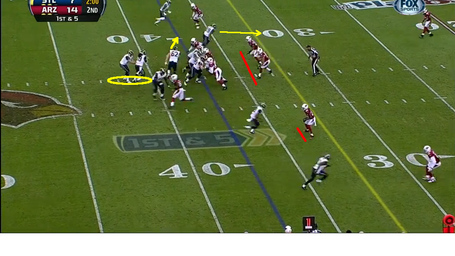 Soon enough, it becomes clear what's happening, and one of the middle linebackers, Daryl Washington, turns around and goes after Kendricks. Bradford makes a perfect pass, getting enough on the ball to get over Darnell Dockett's upthrust hands (not pictured here). 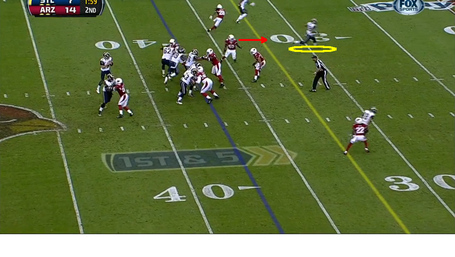 Here's Kendricks in fine form. The safety comes over, but can't make the tackle because Kendricks throws a mean stiff arm on him.

I don't understand why the Rams aren't targeting Kendricks more as a receiver. Yes, his hands aren't the best, but when Bradford's accurate, that's not the most difficult obstacle to overcome. Partly, they need him as a blocker. He hasn't dropped a pass since Week 5, against the Cardinals, when he scored his only other touchdown so far this season. He's caught 25 of 32 passes thrown his way, dropping just three.

A couple other lessons on this play: